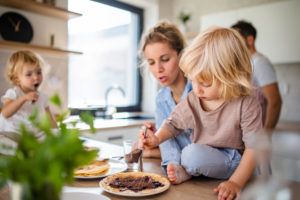 GeneralBuying or Selling a Home
FacebookTweetPinLinkedInEmail

You may think you’re buying your forever home, but most Americans stay in their houses for an average of 13 years, according to the National Association of Realtors (NAR). And while accepting a new job may require a move, something as simple as a desire for more space can leave you feeling conflicted about taking the plunge. Whatever the reason you think you’re outgrowing your home, you’ll need to consider whether that means renovating or moving.

Renovations that may allow you to stay put longer

According to a recent Remodeling Impact Report by NAR, 74% of homeowners who renovate say their desire to live in their home increased after renovating. So, before you start searching for a new home, consider what projects could enhance your home’s livability so it meets your current needs. By keeping your home and renovating, you’ll avoid the hassle-factor of selling, buying a new home and, of course, moving.

On the other hand, renovating comes with its own hassles. And it can be expensive. For example, if renovating means taking out a home equity loan, expect to pay between 2% and 5% of the loan amount in closing costs. Even so, that may be cheaper than the fees on an entirely new loan.

These popular renovations can not only improve the liveability of your current space but also provide a decent return on investment (ROI) if you eventually decide to sell.

Depending on the scope of your project and what materials you’re using, additions can range from $15,000 to more than $100,000. HomeAdvisor says homeowners end up spending $40,900 on average. Your ROI will depend on the exact project, of course — a sunroom can yield a 49% ROI while a two-story addition provides an ROI of about 65%.

Renovations not enough? Here’s what to do if you decide to move

About 35% of homeowners say they’d rather move than renovate. Perhaps you’re going on year 10 in what was meant to be your more affordable starter home, and those 2,000 square feet of space really aren’t cutting it any longer. Or maybe potential renovations still won’t get you closer to your dream house. But don’t make a hasty decision based entirely on aesthetics — you’ll have some practical concerns to weigh as well before making a move.

Likelihood of another move. Keep your long-term goals in mind when deciding whether or not to move, especially if you want your new house to be your forever home. In order to age in place, you’ll likely need a home with minimal stairs and one that doesn’t require extensive maintenance. Consider properties that meet both your immediate and long-term needs to ensure an easier transition.

GeneralBuying or Selling a Home

Pros and Cons of Buying a Fixer-Upper

Best Paint Colors to Increase The Value Of Your Home

How to Pick the Perfect Neighborhood When Buying a Home

Selling As-Is? Why This is Never a Good Idea

Find out Which Hazards Are Common in U.S. Homes, Learn How Much Insulation You Should Have. What Tools Your College Student Should Have and More

On location in Bedford, Massachusetts With This Old House

Should you Remodel or Move? Prevent Plumbing Emergencies, How to Use Your Ladder Safely and more

How to Have a Clean and Safe Fireplace, Replace Your Mailbox to Increase Curb Appeal, How to Have a Safe Shower for Every Member of Your Family, and more.