Tom Kraeutler: Welcome to this addition of The Money Pit’s Top Products podcast. I’m Tom Kraeutler, reporting today from the Consumer Electronics Show in Las Vegas. Now, one of the concerns consumers have about home automation is selecting a platform that’s going to be there for the long-run. And one platform that no one questions is that of Apple. Kwikset is out now with a new product called Premis, designed specifically to work on the Apple HomeKit. With me to talk about that is Michael Magnani. So how does the Premis lock interface with the Apple HomeKit? 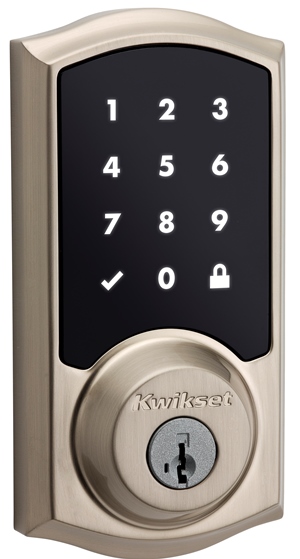 Tom Kraeutler: So with Apple HomeKit, does this I’m going to be able to tell Siri to open my door?

Michael Magnani: Exactly. That’s what it’s all about. It’s really about interfacing with the Apple platform, and Siri is one of the most prominent ways of how you can interface it. So you can ask Siri, “Are my doors locked, Siri?” Or, if they’re locked and you want to let somebody in, “Siri, unlock my door.” That’s what’s really cool about HomeKit.

Tom Kraeutler: Now, one of the concerns that consumers have about electronic locks is the lack of power. What happens if the batteries go out?

Michael Magnani: It’s actually no problem. We’re having an app that comes with the product, so that app lets you know when the batteries are running low. So even way before the batteries running low, you get a notification that you should replace those batteries, and even if they were to run low, we also have a back-up key, the Kwikset Smart Key, that lets you go into your house and unlock your door.

Tom Kraeutler: So when all else fails, you still have a hunk of metal?

Tom Kraeutler: OK. Now, Kwikset works on a platform called KEVO. One of the concerns that consumers had, as I said earlier, is about choosing a platform that’s going to be applicable to all the products they’re interested in using from a smart home perspective. Do your products interface with most of the current platforms?

Michael Magnani: Generally, from a Kwikset perspective, we have a lot of choice for the consumer. That’s really what our product strategy is. We want to give the consumer the choice to get the best door locks in the market, from Kwikset, and then work with Z-Wave, Zigbee, our own proprietary KEVO platform, and HomeKit things. And then also we show [inaudible 00:02:14] so as you can see we’re all over the things that are hot in the market, and we want to give consumers choice.

Tom Kraeutler: Fantastic. Michael Magnani from Kwikset. Thank you so much for stopping by The Money Pit’s Top Products podcast.

How to Buy a Home with Less-than-Great Credit

How Much Insulation is Best, Do Energy Efficient Washers and Dryers Save Money and How to Flood Proof Your Home

Adding Insulation for Added Warmth, the Home Appliance to Splurge On, and Sheet Shopping 101 for a Better Night’s Sleep

Tips to Avoid Ticks, Refinishing Hardwood Floors and Staying Cool Through the Dog Days of Summer