You are here: Home / How to Fix Low Water Pressure in the Shower

LESLIE: Well, if you’ve ever stepped into a shower hoping for a good wakening, only to find a less-than-inspiring trickle, you know how frustrating poor water pressure can be. 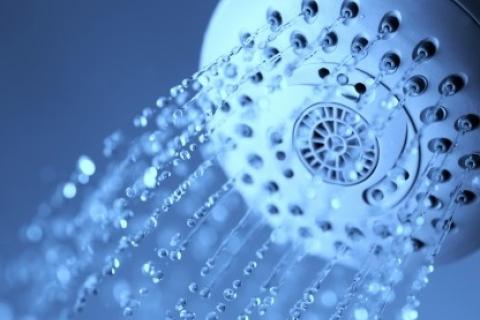 TOM: Ah, yes. But the power of a good shower may not be out of reach. Richard Trethewey, the plumbing-and-heating expert on TV’s This Old House is here with tips to help restore the flow once again.

RICHARD: Hi, guys. Nice to be back.

TOM: Now, if you’re faced with poor water pressure, where does that diagnosis begin?

RICHARD: Well, you’ve got to figure out where the restriction is. So let’s think about a plumbing system. Most people have their water that comes from the municipal water supply. So if all the house, every fixture has low water pressure, you have to think, “OK. That means it must be in the water main that’s coming in from the street.”

So, there are people with water mains that are made out of galvanized – even old lead lines. And what happens is over time, the inside of those pipes can get so small that you can look in them when you cut them out later and it might be no bigger than a pencil.

RICHARD: Yes. They got us. The town takes it from their street.

TOM: They’re pretty smart about that.

RICHARD: That’s right. And so, that’s one that we see quite a bit. More than you’d think. People live with this old water main and they don’t want to go to that expense to live – to dig up the front yard.

Now, if your water pressure is just low on the hot-water side but everywhere in the building, you could – you should look at how the hot water is made and is there either a thing called a tankless – it’s inside of a boiler. And the cold water goes in and gets heated and then it comes back, yeah, after it’s been heated and goes through a really small, little mixing valve. And that could be clogged down. And so, if just the hot fixtures are low in pressure, then look at your hot-water supply and there’s some impediment to flow that you’ve got to get rid of or clean.

And then, finally, if it’s just at a fixture, then you’ve got to look at is …

LESLIE: Now, is that the easiest fix?

RICHARD: Yeah, then it’s an aerator or – we had one that we did on Ask This Old House that the water pressure was so low. And we opened up the aerator on the bottom of the faucet and we found all Teflon tape and all kinds of things that had clogged it. But the symptom that it gave you was low water pressure. And it really wasn’t; it just was that it couldn’t get through the fixture.

TOM: Very, very simple matter of relieving that clog, essentially, and the flow is restored once again.

RICHARD: That’s right. That’s right. Right. But you really start by thinking like a detective. “OK. Where is the problem? And let’s work backwards and sort of solve for X by figuring out where the low water pressure is.”

So, the other thing is the piping system in a building. Now, in the 30s and 40s, in many parts of this country, they used not copper piping but they used galvanized-steel piping. And so, galvanized-steel piping is indeed a metal, so now it can rust from the inside. And so, if hot and cold is low pressure in the house but you proved that you’ve got good water pressure coming in from the street, then you’ve got to literally repipe the house.

And that sounds scary. Most people, at first glance, would do it with copper. But nowadays, we’re seeing alternative plastics. There’s a thing called PEX, which is this soft, plastic piping that you can run like wire. And you can completely repipe a house in way shorter a period of time and get new, clean water supply anywhere in the building.

TOM: And if you do have that galvanized piping, I guess the rule of thumb is that if you do open up a wall, do any kind of renovation, never put it back together without replacing it.

RICHARD: Oh, yeah. Every chance you open up a wall, think about how to do it for the next 50 years. Don’t leave a little piece of it in there; get rid of it when you can.

LESLIE: Is there ever a need to install a pressure booster? That you’ve tried every source and really investigated every possibility and it’s just low water pressure?

RICHARD: Yeah. I mean there are towns in my local area that the town itself cannot provide much more than 30 to 40 pounds of pressure. Now, that’s not always enough for some people; they want 50 and a little bit more.

So for that, down in the basement, they put in a pressure booster. And it’s a way to bring water in and have a little pump that’s sort of going to pump water to a higher pressure, into a little holding reservoir/tank that’s down in your basement. Now, when you open your faucet, you get that higher pressure. It’s painful because it’s expensive to do but anybody that’s lived with low water pressure and sort of sat under a showerhead hoping to get enough water, the pain of that pressure booster goes away really quick.

So, Richard, another problem that we have with water pressure occurs when you get this – sort of this imbalance in hot and cold, usually while your spouse is taking a shower and you hear a shriek from the shower?

TOM: How do we deal with that? What’s causing that to have a pressure problem?

RICHARD: This is a subject that’s near and dear to my heart, you know? When we have a standard, old-fashioned showerhead – a hot handle and a cold handle – the two temperatures would mix and come out through the showerhead. And when you flush the toilet, all of a sudden, the cold pressure disappeared. That meant nothing but hot coming out of the showerhead.

They make a thing called a “pressure-balance shower valve.” They make it that you can retrofit them into any house, with a little repair plate that’s just – it’s just brilliant. It means no matter what happens, somebody flushes the toilet, you get the same, consistent temperature. It really eliminates any chance of scalding in the shower.

LESLIE: And small kids who love to flush toilets.

TOM: So what happens is the flow may change, the flow may reduce but that balance between hot and cold stays consistent. The mix …

LESLIE: The mix is the same.

RICHARD: That’s right. It stays always in proportion with each other. And so, if cold drops, hot drops, too. But the key is that the temperature stays consistent.

TOM: Fantastic invention. That will save marriages.

LESLIE: Yes. But I still like to fill a pitcher with icy-cold water and dump it over the top of the shower once in a while.

LESLIE: Once in a while.

TOM: Richard Trethewey, the plumbing-and-heating expert on TV’s This Old House, great advice. Thanks so much for stopping by The Money Pit.

RICHARD: Always great to be here.

TOM: And This Old House is brought to you by Lumber Liquidators. Hardwood floors for less.