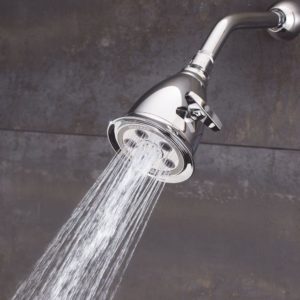 How to Regulate Your Shower’s Temperature

How to Regulate Your Shower’s Temperature

LESLIE: Well, it’s probably happened to you at least once or twice: you’re standing in your shower and you’re having a great time, the water’s hot, you’re feeling good and then all of a sudden, it’s like “Gwah-zoiks (ph)!” The water turns either freezing cold or super-duper hot.

TOM: And that’s an experience that can knock anyone off-balance. The solution, however, is to install a pressure-balanced valve. With us to talk about that is Richard Trethewey, the plumbing expert for TV’s This Old House.

RICHARD: Hey, guys. Nice to be back in The Money Pit.

TOM: And this is a situation also called “shower shock,” for a very good reason. Can you tell us exactly why it happens, so at least when we do get zapped the next time we’re in a shower, we’ll understand it?

LESLIE: We know the reason.

RICHARD: Well, you’ve got a hot pipe and a cold pipe that come up to your shower area. And they should have the exact same pressure, because the pressure coming in from the street should make it consistent. So let’s say that’s 40 pounds on each side. If you now flush a toilet and all of a sudden, the pressure drops on the cold-water side while you’re taking a shower, then the hot-water side has higher pressure. Thereby, more heated water goes through the shower head and you get scalded.

TOM: So it’s really a matter of volume. If you spill off some of the cold water to flush a toilet or run the dishwasher, all of a sudden, there is that imbalance.

RICHARD: Some volume of water goes when you flush the toilet but it is – all of a sudden, there’s a pressure imbalance and the hot-water pressure wins.

LESLIE: So it’s like the tortoise and the hare; suddenly, the hare takes off and it’s gone.

RICHARD: Yeah. Yeah, that’s right. And it is a common problem and I – we’ve been in love with this basic, single-lever, pressure-balance shower valve for years. It was one of the great innovations in plumbing because it can eliminate this completely.

TOM: So how, exactly, does that work then?

RICHARD: Well, imagine it has a piston. We did a great, cutaway explanation of this on Ask This Old House in the studio. And so, now, there’s a little piston inside this shower valve that when it feels the cold-water pressure drop, it slides the piston in the opposing direction. It’s very counter-intuitive and it makes the pressure on the hot-water side go lower to match whatever the cold water is. So it’s constantly going to slide that piston back and forth to make sure that the pressures at both hot and cold, regardless of what happened in the house, stay the same. What a joy to be in a shower and not have to worry about that scald.

LESLIE: Now, are you going to notice a drop in the pressure of the shower water itself, just because it’s balancing it?

RICHARD: Slightly. It really depends on how much the pressure has dropped, meaning if the plumbing system is properly sized, you won’t see any real, noticeable change. If it’s undersized, you’ll see a drop but if it’s sized properly, you’ll see no appreciable change in pressure.

LESLIE: Mm-hmm. Now, the pressure-balance valve, this is something that’s installed behind your shower wall, so – and I imagine that every house is pretty much getting one of these. But what happens if you’re one of the unlucky few and you don’t have one? How do you sort of correct this without tearing down a wall?

RICHARD: They have the most ingenious repair kit, a replacement kit. Now, the 1930s, 40s and 50s bathroom that – maybe not the 50s but it would have had the three handles: the hot, the cold and then the middle one to determine whether or not …

RICHARD: That it went up to the shower head or down to the tub spout. Now, with this, you can mount a template. You can remove that valve, chip away the tile and there’s this cover plate that can cover exactly where those three handles were and allow you to retrofit this single-lever, pressure-balance valve.

RICHARD: We’ve done it on the show a couple times and it’s really a great solution for people. It’s amazing people live with this level of fear. They spend their whole lives – “Don’t tell me to go back into the …”

TOM: Right. Yeah. It’s the – yeah, it’s the source of all this domestic stress.

TOM: And it doesn’t have to be, because …

RICHARD: “Don’t run the dishwasher while I’m up there.”

TOM: Divorces have been caused by less.

RICHARD: But we do marriage counseling, too.

TOM: Alright. He’s a very, very flexible guy. Lots of skills, including teaching us how to avoid the dreaded shower shock.

Richard Trethewey from This Old House, thanks for stopping by The Money Pit once again.

TOM: And actually, on ThisOldHouse.com, there is a very, very good article called “Stop the Shock,” that walks us through some of these very same tips.

How To Repair a Leaky Shower Handle | Video

Stop a Cold Shower When the Toilet is Flushed

Shower Gets Cold When Toilet Flushed: How to Fix