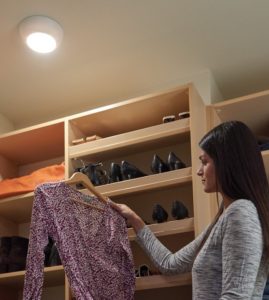 LESLIE: Laurie is on the line and has a question about getting the best lighting for closet. What can we do for you?

LAURIE: Over the weekend, I went into the closet and discovered that the transformer for my fluorescent light fixture in my closet was smoking.

LAURIE: We got the power killed and the unit taken off.

LAURIE: Then I went to the store to find a replacement. I had a two-round fluorescent fixture: one with a 22-watt, one with a 32-watt bulb in this center of an 11-foot-long by, say, 52-inches-wide closet. I’m trying to figure out the amount of lighting needed for closet, figuring I’m going with LEDs for energy savings. And I’m sitting there staring at ceilings and light fixtures with so much light, I can’t judge. It’s talking to me in lumens and it’s saying this is the equivalent of 175-watt-bulb or 2 …

TOM: Yeah. Well, this is a closet, so I say you really can’t have too much light.

LESLIE: I mean I guess it depends on your comfort level with lighting. If you – some people are very light-sensitive and get ocular migraines, so you have to be careful in determining the best lighting for closet that you don’t over-light it. But I think it’s a basis of what was in there before.

TOM: Why’d you have them on all the time?

LAURIE: Whenever I was in the closet, they were on.

LAURIE: What I’m saying is that I didn’t have a choice in just lighting one of the two bulbs.

LESLIE: Or a dimmer or any of that.

LAURIE: I did have dark spots.

LAURIE: Yeah. At the corners of the room, because it’s in the center of the room. It’s long and skinny. So, the two dark corners …

LESLIE: I think a good solution is forgo the electricity altogether and go for a wall-mounted item that you can put up yourself, that’s battery operated, that will have an occupancy sensor on it that knows when you’re coming and going or even ones that you can just turn on. Mr Beams, they manufacture a couple of different battery-operated lights that will run for ages and ages and have a ton of lumens that’ll give you the brightness you need.

TOM: Yeah, if you want to try and determine the best lighting for closet, know how many lumens you had there before, a 22-watt circular bulb, which is maybe the size of your smaller one, that’s roughly about 1,000 lumens.

TOM: So that just kind of gives you a ballpark for the best lighting for closet. But the LED lights are going to be so much brighter than the old fluorescents that you had. They’re going to be safer to run. It’s almost not …

TOM: Yeah. And cleaner. And you already have the wiring there. But if you wanted to go and put one fixture up where you had the wiring and then go to the deepest, darkest corner of that closet and put in a couple of Mr Beams battery-powered LEDs – I’ve got one of those in my closet and I’m telling you, it really works well. Because sometimes, I go in there – and there’s a light on in the room where the closet is. But when you open the door, you really can’t see into it. And as soon as I open the door and stick my head in there, boom, the light comes on and I can see just fine. So, you might even want to do a combination like that so you don’t have those dark spots and then you can really see what you’ve got there.

Go to MrBeams.com. It’s a manufacturer that specializes in battery-powered LED lights. And the lights that I put up, the batteries last for an entire year. It’s amazing when you see that they’re battery-powered and how much brightness they come on with. They’re really super bright and they’re not expensive.

TOM: And then you can find them at lots of different retailers and so on. But get one and test it out. You’ll be really surprised with how bright it is.

LAURIE: OK. Thank you so much because like I said, after trying to look at all the fixtures – and I would see 80, 120, you know?

LAURIE: I came home with a headache.

TOM: Yeah, I hear you. Alright. Well, I think that what makes the most sense is for you to put in one decently sized LED fixture. And then if you’ve got some dark spaces, pop a couple of the battery-powered ceiling/wall lights in there and I think you’ll be well-covered.

LAURIE: OK. Well, thank you so much.

Switch to Led Light Bulbs to Save Money and Energy