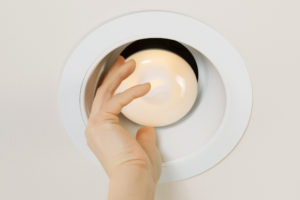 LESLIE: Stuart in Louisiana is on the line and has a question about choosing the correct kind of light bulb. What can we do for you?

STUART: I was curious about choosing the correct kind of light bulb – fluorescent versus LED – and what wattage if I – whichever one I choose.

TOM: So, compact-fluorescent technology is pretty much fading now – pardon the pun – and I think what you really want to look at is some of the many choices in LEDs. In terms of wattage, you know, it’s not really measured in wattage anymore; it’s measured in lumens. But generally speaking, if you do see a wattage indicator on the bulb, it’s going to be about 25 percent of what you’re used to getting in terms of light output.

So, for example, the correct kind of light bulb that would deliver the equivalent of around 100 watts of light, that you might be used to in an incandescent bulb, is only going to use about 25 watts or less of electricity, only because it’s that much more efficient. A lot of folks don’t recognize that wattage is a measure of power; it’s not a measure of light. Light’s measured by lumens. But we’re just so accustomed, over the years, to choosing the wattage when it comes to bulb and understanding how much light that delivers.

But if you’re trying to figure out about the correct kind of light bulb and what the conversion rate is, it’s about 25 percent. It uses about 25 percent of the power to deliver the same light that you would’ve gotten out of, say, the 100-watt incandescent bulb in my example. Does that make sense?

STUART: It does indeed. So what lumen range would I be basically looking for if I wanted to have the same amount of wattage – I’m sorry – same amount of light as a 100-watt light bulb?

STUART: Fantastic. Thank you very much for your assistance.

TOM: Good luck with that project.

How to Hang Christmas Lights | Video

Can I Exceed My Light Fixtures’ Recommended Wattage Limitations?

How to Plan the Perfect Addition

Fluorescent vs. Incandescent Lighting for a Kitchen