Well, for speed and power, a brad nailer is the perfect choice for many woodworking projects, including trim and molding, baseboards, furniture, and cabinetry.

Now, those of you who use one on a regular basis know it can be an indispensable tool, but the experts at Bostitch thought that the traditional brad nailer could use a few improvements, so the company addressed the top four user concerns that came up with a brand new product. 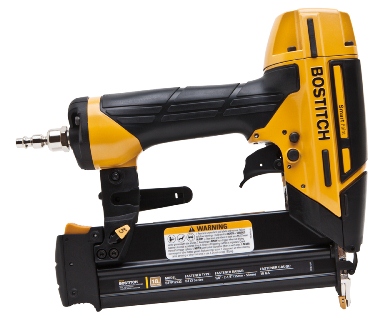 It is called the Smart Point Brad Nailer. And here to tell us more is George Silveira, a global product manager for Bostitch.

One thing that’s cool about the way you guys approach the manufacturing process is you never leave well enough alone, and you know that there’s always a better way to build a new mousetrap, so to speak. And you guys have done that once again with the brad nailer.

So let’s start with your research:

When you looked into the product category, what were some of the main concern that the users had about using a brad nailer?

JORGE SILVEIRA: We spent a lot of time talking to the users, and four things kept coming up during our discussions, that weren’t being addressed with the brad nailers today:

First one is that the way that the tool nose is designed, they are rectangular; they are kind of large. It is tough to get into tight areas. Additionally, with that type of design, you’re not exactly sure where the nail is actually going to penetrate the material that you’re working with.

The tools are designed with a safety you have to basically engage against the work so that you can then pull the trigger and pin, actually. What happens by engaging against the work – it could leave marks, or you move your material out of the way.

And, lastly, that safety moving up and down – sometimes, contaminants get in, and it slows down the product and could slow down your operation.

TOM KRAEUTLER: Well, I could definitely sympathize with a number of those. I mean, by its very nature, if you’re going to use a brad nail, you’re going to be doing fine work more often than not, and so you do need to get into those tight spots.

And when you’re using a nail that has a large rectangular head, not only can you not get in there, but you never know exactly – if the nail is going to end up exactly where you want it. Then sometimes you miss, and it ends up sort of half out, and it becomes very difficult and very challenging to continue with the project.

So you guys took these four areas of concern and then sort of redesigned the new Smart Point nailer. So how does that change? Let’s start with the nose. Is it its different shape? Is it smaller? How do we get more accurate with the tight spots?

JORGE SILVEIRA: The first improvement is we changed the physical look or design of the nose. It is actually like a V shape, so it comes down towards a point, so that allows you to get into those tighter areas and improves your visibility.

TOM KRAEUTLER: So you know exactly where the nail is going to exit the tool, in other words.

JORGE SILVEIRA: Correct. The other improvement that we made, besides the nose coming to a V, is that we actually eliminated the separate contact trip for the safety. It is actually now built into the nose; it is integrated into the nose. The nose will actually move up and down, so you don’t have this other mechanism that wraps around the tool and limits your visibility as well as increases the size of the nose of the product.

TOM KRAEUTLER: OK, so just to kind of restate that – so the contact trip was actually a separate part of the mechanical system, and you had to have that in contact as well as the nose to actuate the gun, and now the trip is actually part of the nose mechanism, too? It is all joined into one unit?

JORGE SILVEIRA: Yes. So that was the challenge to our engineers, which they were able to solve.

TOM KRAEUTLER: Yeah, I bet. And, in doing so, you didn’t have to add any additional pressure to the gun? Because I know you had mentioned that you were concerned about the marring of it, and so you would think that that would add some more pressure on the tip to where you’re touching the surface. But you’re able to achieve that without any additional pressure that could possibly scratch the surface?

JORGE SILVEIRA: Yeah, so the third improvement that was made is, typically, the way the safeties work, not only are they a separate piece but you have to, as you mentioned, push against the work so that the safety compresses and then allows the tool to fire.

We’ve actually designed the nose where it is in the up position, or the contact trip is biased towards to tool. So when you  – – all you have to do is place the product against your work and pull the trigger; it will realize that there’s material there and allow you to fire.

If you were to take it off your material and try to pull the trigger, the nose will extend out, alerting the tool that it is not safe to fire, and it will not fire a nail.

TOM KRAEUTLER: We’re talking with Jorge Silveira. He is a global product manager for Bostitch, about the new Bostitch brad nailer.

This tool has the world’s first Smart Point nose that makes nail placement easier in tight spaces. And it has an integrated contact trip that doesn’t need to be compressed in order to fire.

Now, in addition to developing those advances in the tool, I understand that the product is also oil-free. And that’s nice because, again, when you’re working with fine work – sometimes, you work with fabric in connection with a brad nailer – you always have the risk of oil stains, so it seems like that’s no longer an issue.

JORGE SILVEIRA: That’s correct. As I mentioned, the micro-nose allows you to not damage the work surface by pushing against it. Eliminating oil keeps oils or contaminants getting on your work. It keeps the tool cleaner and potentially keeps your work surface, as well, cleaner.

And there is no guesswork by the user on how much oil they would have to put in the product; they are designed to operate without it and give you the same long life.

TOM KRAEUTLER: And by keeping the tool cleaner, does that also help prevent jams?

JORGE SILVEIRA: Yes, you get less buildup, gunk inside the tool. Again, you – it is designed so that you get the same long life but not any of the negative drawbacks that you have with oil products.

TOM KRAEUTLER: Now, what about controlling the depth of the nail? Is there a way to do that? Because, sometimes, with thin material, you’d want the brad to not sink as much as it might be if the material is thicker.

JORGE SILVEIRA: Yeah, great point, Tom. One of the benefits of having a safety separate contact trip is that most tools today, you adjust that up or down with a dial, usually, around the – somewhere located on the tool, and that increases or decreases the space between the tool and the work, and that allows you to set the nail deeper or less.

We could still adjust our nose up and down, and we did not lose that feature. We have actually built it where, when you adjust our mechanism, the nose will move up or down and let you set it so that you can properly set your nail heads in your material.

TOM KRAEUTLER: That makes a lot of sense. And one last question before I let you go – one of the fun things that I think about using these tools is, when you get a chance to use them in sequential operation – I mean, all guys just, like, go bang-bang-bang with these things, right? So how does that happen in light of the new design?

JORGE SILVEIRA: Our trigger system allows you to select what mode of operation you want to use. It comes from the factory set at “sequential,” which means you have to put it against the work, fire once, then repeat the process.

But there is also a mechanism – a wheel – that basically allows you to turn it and put it into contact fire, which means that you can fire if you hold the tool against the work and pull the trigger as many times as you want. It will fire as rapidly as you pull the trigger.

TOM KRAEUTLER: So when you want to run down that whole piece of trim, you can get sequential shots and get a job done that much quicker.

TOM KRAEUTLER: Great. We are talking to George Silveira, a global product manager for Bostitch, about the new Bostitch brad nailer with the world’s first Smart Point nose that makes nail placement easier in tight spaces.

When is the product due to be launched?

JORGE SILVEIRA: It launches in March 2013.

TOM KRAEUTLER: That’s fantastic. And you can find the product at home centers, mail-order retailers, and tool distributors, and hardware stores.

And if you’d like more information about the new Bostitch Smart Point 18-gauge brad nailer, you can check it out at Bostitch.com – that’s B-O-S-T-I-T-C-H(dot)com.

JORGE SILVEIRA: Thank you for having me on.

The Staple Gun: a Useful Weapon for Many Projects!

Now Hear This: DIY Projects Can Lead to Hearing Loss