LESLIE: Well, when you wake up each morning and head to the bathroom, a perfectly illuminated reflection of your sleepy self might not exactly be the way you’d like to start the day. I know I look amazing in the morning. 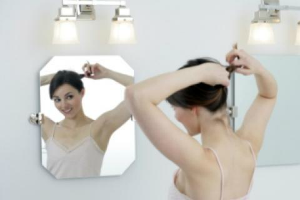 TOM: Well, you must be the only one, because that frightening image may not actually be you at all if bad bathroom lighting is in place. Kevin O’Connor is host of This Old House and joins us now with some tips on how to achieve brilliant bathroom illumination.

TOM: So that green glow staring back at you in the morning might not be from lack of sleep?

KEVIN: No. And it might not be the bottle of wine or the six-pack of beer, either. You might actually be able to blame it on your lighting and in particular, maybe your fluorescent lighting?

TOM: Ah, yes. So many old bathrooms out there have those tubular fluorescent lights and it’s just really the worst choice.

KEVIN: Yeah. They sort of give you a greenish glow. They’re not flattering at all. We like the efficiency of them but it’s really – I guess it’s just not what you need first thing in the morning.

The general lighting, that’s what you want when you just – when you step into the dark bathroom and you want to be able to navigate around. You just turn on the overhead light and it illuminates the entire space. It allows you to navigate through that space without tripping over things. If you’re in the shower, an overhead light in the shower – the general lighting there is great so that you’re comfortable and you’re well-illuminated in the shower. Those are good.

But for task lighting, well, you know, when you’re actually at the vanity – when you’re shaving or when the woman’s putting on her makeup – that’s a whole different type of lighting. And it’s good to keep in mind that you don’t want the source of that light to be overhead. You don’t want …

LESLIE: Or too many shadows. I’d put on way too much makeup. You would see a very different Leslie. Lots of eyeshadow.

KEVIN: Yeah. I mean that’s what it does: it casts shadows when it’s overhead. So, ideally, that task light, when you’re at the vanity, is positioned at about face height and it’s to the left and the right of your face, if you can pull that off. So, fixtures that are on either side of the mirror, sconces sometimes that are actually into the mirror, that is ideal.

TOM: Now, let’s not forget about natural light. Any opportunity to get natural light in a bathroom is a good thing, because you’ll need less electric light if you can add a skylight or a sun-tunnel light or something like that.

KEVIN: Boy, that is ideal and especially for that morning bathroom trip. If you’ve got natural light coming in, it’s going to help wake you up, it’s going to be more enjoyable and vibrant.

LESLIE: And maybe you won’t be so crabby to the kids if you feel like you look nicer.

KEVIN: Maybe you won’t be.

LESLIE: Now, I think with this light-bulb revolution that’s sort of going on – as at least in my mind, that’s what I like to call what’s happening in the light-bulb world – how do you know what bulbs to choose that are really going to give you the best light effect so that you can put your best face forward?

KEVIN: It is a little bit more complicated these days, because our traditional incandescent bulb, where there really wasn’t much of a choice, that’s sort of going away. And the alternatives are here to stay: the CFLs, the LEDs and the halogens. Whether we like them or not, they’re here and they give us some choice. Because we can actually now start choosing different colors of light.

There’s an index called the CRI, which is the color rendering index. And you can find it on the packaging. A good rule of thumb is that if you are in the bathroom and you’re going with a CFL, a CRI of 90 or above is a good place to start. That indicates that they’re closer to displaying the colors that they were for daylight tones.

TOM: That’s a good point, because lighting color is important. And folks don’t understand that a bulb is not a bulb is not a bulb. The bulbs are designed to give off different color light. And especially when it comes to that important task lighting, you want to make sure that it looks as much like daylight as possible.

LESLIE: Well, it’s interesting. We have two lamps in our dining room. Both are on dimmers. Same lamps we’ve had for a hundred years. When we switched over to different light bulbs in there, I put one in that had a cool and one that had a daylight and not even realizing. And then I’d turn them both on and there truly was something starkly different about both of them. And it wasn’t a couple of days until I realized exactly what the heck was going on. But it’s true: the temperature of the bulb really does make a huge difference.

KEVIN: Yeah. And unfortunately, I think it’s a little bit of trial and error. I think you do have to go get a couple of those bulbs, understand what color they are and put them in different fixtures and figure out: “Is that the right color that I want for this particular space?” In the bathroom, daylight is a great thing to shoot for.

TOM: Now, Kevin, with all these choices, what do we need to consider when it comes to choosing the light controls?

KEVIN: Well, the nice thing about controls is that there’s a lot more of it these days.

KEVIN: We can control our fixtures and such. And so, some great things to think about with the bathrooms are switches that will turn things on and off automatically.

KEVIN: So we can actually have a bathroom fan that goes on automatically and stays on for a set period of time, so that when we’re done taking a shower – well, you know what? That’s not the right time to turn the bathroom fan off. That fan still needs several minutes – 15 or 20 minutes, maybe – to clear all the moisture out of that room. So there are controls out there that will say once the fan is on, it will stay on for a minimum of, say, 20 minutes or so.

Same thing for turning the lights off. There are occupancy sensors out there. They will know, because there is no more movement in the bathroom, that there’s no one in there anymore and it will turn that light off for you automatically.

TOM: And of course, when you’re having a nice party, you want to make sure that your bathroom is illuminated, perhaps using those decorative lights. Dimmers work well for that so people can find their way into that room and shut off just enough light when they leave.

KEVIN: So here’s something that’s a little quirky but I just saw for the first time. You guys go to the International Builders’ Show where all the new, fancy stuff comes out. They’ve got a toilet with built-in nightlights.

KEVIN: It’s built into the toilet and it’s this little, blue circle of light right around the bowl.

KEVIN: Isn’t it? And so you never have to leave a light on in the bathroom. The only thing you really need lit up in the middle of the night is that bowl and it’s sort of always on at night.

LESLIE: No, I like it. Because I leave the bathroom light on all night, like super-dimmed low just in case somebody’s got to get up and go.

LESLIE: And this way, it’s easy to find. But that would be great and maybe a five-year-old would actually pee in the toilet instead of elsewhere. Not saying …

Kevin O’Connor, the host of TV’s This Old House, thanks so much for stopping by The Money Pit.

KEVIN: Thanks for having me, guys. Always a pleasure to be here.