How to Install an Under Sink Water Filter

Home » How to Install an Under Sink Water Filter

How to Install an Under Sink Water Filter

LESLIE: Well, if you’re a big drinker of bottled water, you may have noticed that the price never seems to go down and you might be ready for an alternative to the cost and all that waste. 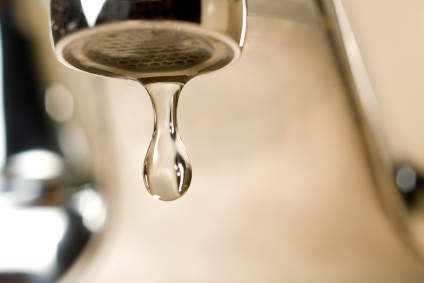 TOM: But there are alternatives. You can save money and go green with an under-sink water filter. Richard Trethewey, the plumbing-and-heating expert for TV’s This Old House is here to explain.

TOM: It’s good to see you again. And Americans, boy, we drink a lot of bottled water and those expenses can really add up.

RICHARD: You know, it’s about a $6 billion-a-year industry, this bottled water.

RICHARD: It is – there are a lot of those little bottles going around. And the rest of the planet uses about $29 billion. I mean it is a big industry. What is the Earth, two-thirds water?

RICHARD: We’re going to drink it all sooner or later, so …

TOM: Now, why do people think that the water in those bottles is that much more cleaner than what comes out of their sink? There are regulations that water authorities have to follow.

TOM: They’re respected all the time.

TOM: The water in this country, for the most part, is pretty darn good.

RICHARD: That’s right. We feel like we can trust in this country – when you go to a faucet, you at least feel, if it’s a municipal water supply, that that water is trustworthy. But what’s happened is people, I think, are still nervous. There’s a few things I think every house will have, sooner or later. One is water filtration, both under the sink and potentially coming into the building. A couple of solar panels will be on the roof, I think, on most houses.

RICHARD: And I think every house will have some sort of way to bring fresh air into the building, some sort of mechanical ventilation device.

RICHARD: Those are the three things I think …

TOM: We’re all feeling that much more health-conscious.

TOM: Well, in terms of the sink filters themselves, there are a number of different types of filter technologies out there.

TOM: Talk to us about how they actually work. And which ones are most effective?

RICHARD: The most common one, by far, is a thing called “granulated activated carbon.” That is the – it’s a carbon-block filter and the water goes through it. Carbon is a great filter to get taste and odor under control.

If that’s what you’re trying to do, just to sort of cosmetically clean up that water for taste and odor, you can’t beat a granulated activated carbon filter.

TOM: Now, is that under-sink? It’s an under-sink filter.

RICHARD: Yeah, most of these are under-sink.

RICHARD: You have to decide: “Am I trying to deal with the whole house? Am I trying to deal with the water that I drink?” And so, in most cases, there’s so much water coming into the house that you’re going to use for bathing and for toilets. You really don’t often have to do a whole-house filter. You’ve really got to think about that water that people are going to drink with, cook with or to make ice cubes with.

RICHARD: And so, under-the-sink filter is what most people should have and do have.

LESLIE: Mm-hmm. And is that something that you can do yourself, as far as installation?

RICHARD: They have made the installation pretty darn easy nowadays. You’re still dealing with plumbing, so you’ve got to make sure you turn the water off and make those connections. But so many of them are these really do-it-yourself-able connections.

First of all, you – if you want to have a separate spigot at the sink, you have to use one of the holes that are on the sink. You have to drill a new hole so you have that separate spout coming out for your filtered water.

RICHARD: Some people will do it on the cold water going to the faucet and do everything out of sight. I like to have a dedicated faucet where I know that that’s the water I can trust. And that’s what I go to.

And then you mount it underneath the kitchen cabinet. We’ve done it on This Old House, Ask This Old House a couple times. They should be maintained. The ironic thing is the better the filter is …

TOM: The less maintenance you need?

RICHARD: No, the more.

RICHARD: The more it’ll clog, meaning – so it has a better filter.

RICHARD: And so people will say, “Oh, that thing’s clogged in.” Well, guess what? That means it took out a lot of stuff that would have – you would have been drinking.

LESLIE: Mm-hmm. And not even known about.

RICHARD: So, you really – you’ve got to look at it the right way. That if it’s doing its job, sooner or later it’s going to clog and that stuff, you avoid it. If you put one in that’s got such low filtration capacity, you’ll never have to maintain it but you might as well not have done it.

LESLIE: So is the clog the indicator that the filter needs to be changed? Or do some of these fixtures have maybe a light that comes on or something that will tell you now is the time to change the filter?

RICHARD: It’s going to clog. I haven’t seen any fancy – I’m sure there’s a few on the market that have sort of some filter – or you could do it on time. But I think you’re going to see that there’s a drop-off in the performance because that filter media is getting more and more clogged with particulates that we would have drank.

Richard, one of the common complaints that people have about water is this sort of rotten-egg smell that comes from water. Can that be solved with a filter?

RICHARD: Well, that’s sulfur and that is usually an indication that something else is going on in your system.

RICHARD: And what we most often find when you have that sulfur complaint, it’s usually on hot water. And it is that inside of the water heater, down in your basement or wherever it is – inside that tank, there’s an anode rod – a sacrificial anode rod – that is taking the electrolysis that would have eaten the tank and becoming sacrificial to it.

Now, if that anode rod fails, sooner or later you’re going to start getting hydrogen sulfide in the water because it’s really the beginning of the breakdown of the tank. So it means that you should think about changing that water heater; it’s beginning to give that sulfur smell.

TOM: So that’s a good point.

TOM: So if you actually tried to deal with it with a filter, you might, in effect, be masking (inaudible at 0:26:45).

RICHARD: You might mask it but sooner or later, that basement is going to be flooded.

LESLIE: What about well water? Are you able to filter that, as well, or is that a whole different animal?

RICHARD: You don’t have any idea what the water is coming out of the ground. You don’t know where your neighbor’s septic system is in relation to the water, so I think you can’t filter the water enough when you’re coming out of the ground with a well. So, potentially, you’re going to have a whole-house iron removal, you’re going to have some sort of prefilter for the water coming through. And then by the time you get to the kitchen sink, you want to be sure to have a granulated activated carbon filter.

TOM: And that is definitely a pro project. You’ve got to test that water and build the filtration system around what you find, correct?

RICHARD: Yeah, yeah. Yeah. There’s a lot of great pros in the water-quality industry in this country. You’ve just got to find a local guy that knows what they’re doing.