Tom Kraeutler: This is the Money Pit Top Products podcast coming to you from the 2014 National Hardware Show. I’m Tom Kraeutler. 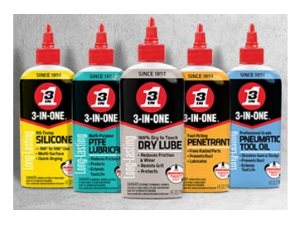 Tom Kraeutler: If you’re any kind of do-it-yourselfer, you probably have a can or two of WD-40 in your tool box. It’s the go-to lubricant for dozens and dozens of projects.

Don Isley: It’s a pleasure to be here, Tom and Leslie. Thank you very much.

Tom Kraeutler: I have to ask you a question. WD-40, very few people know what that stands for. I understand it stands for water displacement formula 40.

Don Isley: It does.

Tom Kraeutler: Is that correct?

Don Isley: You win the prize.

Tom Kraeutler: It’s an interesting story. Why don’t you tell it?

Don Isley: The company started in about 1953. It was called the Rocket Chemical Company back in the day. It was originally made for the Atlas Missiles and trying to ward off the corrosion that happens with that, so they invented this product. It was mainly water displacement was the purpose of it. Hence, eventually the brand name because WD-40 and it also became aware that it had literally hundreds and now thousands of uses that it’s good for; lubricating, cleaning, penetrating, protecting, and water displacement as well.

Tom Kraeutler: My 14-year-old was doing a spray painting project just this week and he said, “Dad, how do I get the spray paint off my hands?” I said, “WD-40.”

Don Isley: There you go.

Tom Kraeutler: Works on everything.

Don Isley: It does.

Tom Kraeutler: Exactly. One of your brands on the WD-40 name is the three-in-one brand. It’s been your brand for 18 years. You’ve got a number of new products that are coming out with that. Tell us about them.

Don Isley: Yeah, that’s right. Interestingly, as well, this year marks the 20th year that three-in-one brand has been in existence. Literally over the past year, we have had more innovation in the drip line than has been for the 119 years before that. We do have five new specialty rips items now that I think have wonderful applications for the DIY or/and the traits alike. Anywhere from a dry lube, which is dry to the touch and it’s wonderful at not allowing grit, grime, saw dust to adhere to surfaces. It’s great for blade and bits. We have a silicone lubricant, which is great for all weather conditions, or I should say all temperature, from minus 100 to up to 500 degrees Fahrenheit. We have a penetrant, which is wonderful freeing up frozen nuts and bolts, rusted nuts and bolts, and preventing corrosion from occurring as well. A PTFE lubricant that is wonderful for heavy loads up to 1,000 pounds before it has any where. That’s great in more critical environments. Then also the pneumatic tool oil lubricant and it create a better environment. It prevents water from entering into the pneumatic tools and it prevents corrosion as well as lubricating.

Tom Kraeutler: With the pneumatic tool lubricant, you essentially put it in the airport?

Don Isley: Exactly. Two drops every hour or so of use. Interestingly when I’m working the show the last couple of days, even people who are avid DIYers and int he industry have air power tools and they honestly, many of them don’t realize it’s good to do that type of lubrication to it.

Leslie Segrete: All of your tools come with that little tube.

Leslie Segrete: 119 years, you’ve had no innovations under this brand. Why all of a sudden did three-in-one decide that 2014 was going to be the year?

Don Isley: Good point. We had a three-in-one drip oil. Like I said, that was the main stay product for 119 years. About ten years ago, we did come out with innovation that had a telescoping spout, but it [was and to 00:03:31] allow you to reach places and have precision, but it was done in a bottle that wasn’t as ergonomic and user friendly. We innovated the entire line to be squeezable bottles. They’re portable, they’re fit in your hand well. Think of it in the tool belt, the tool case, the tool box. That was the extent of innovation, was really packaging. Now, we’ve launched into these areas. One of the reasons is because under the WD-40 brand itself, we have a line called the Specialist. That’s an aerosol product line for the most part that we’ve leveraged the WD-40 shield, our main logo, into areas especially products like this, dry lubes, penetrants, silicone, white lithium grease, degreasers, and electronic contact cleaner. That in a sense gave us entry into these specialty lubricants. In a drip line, three-in-one’s the great brand to leverage that.

Tom Kraeutler: It’s only because I’m a home improvement nerd. That’s all.

Leslie Segrete: We always love when we chat with your team about the interesting letters and emails that you all get over at WD-40 about some of the more …

Leslie Segrete: … non-traditional uses of WD-40 that enter in.

Don Isley: There are many non-traditional uses. Most of those I prefer not to talk about because I wouldn’t want it to be an endorsement of a use.

Don Isley: [crosstalk 00:04:51] we wouldn’t put on our packaging. Our website, if you go to WD40.com, we do list literally 2,000 uses of what people have submitted entrants into our fan website, which has a huge following that gives us a better idea of how DIYers and end users use our product. We promote that on our website for other to look at.

Leslie Segrete: Please, the WD-40 I have at home got slurpee out of a silk rug.

Leslie Segrete: There was nothing.

Don Isley: Can you submit that?

Leslie Segrete: I will totally submit that.

Tom Kraeutler: That’s terrific. Don, thank you so much for stopping by the Money Pit. It’s such great information about the history of WD-40, three-in-one oil, and your new releases.

Leslie Segrete: Thanks so much.

Tom Kraeutler: If you’d like more information on the WD products, you can head to their website WD40.com.

Don Isley: That is right. Thank you again.