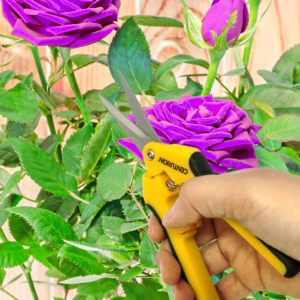 Tom Kraeutler:     Coast to coast and floorboards to shingles, this is the Money Pit Top Products Podcast. I’m Tom Kraeutler with tips on garden tools.

Tom Kraeutler:     Broadcasting today from the ultimate backyard, an exhibit area at the 2018 National Hardware Show in Las Vegas where we ae observing the growth of the outdoor living business in this country because so many folks are interested in expanding those spaces. For example, there was a survey done that said 71% of folks that have an outdoor living space want to a bigger outdoor living space and that involves …

Leslie Segrete:     Well, it just goes to show you no one’s ever happy.

Tom Kraeutler:     It’s a good thing because that keeps us on the air.

Leslie Segrete:     That is very true.

Tom Kraeutler:     With new ideas and that’s one of the reasons we come here is to check out all of the new ideas and opportunities that are here for folks that are interested in expanding their spaces. As they do spend more time outside, certainly there’s a big need for better garden tools to be able to tend to your gardens and your lawns. Our next guest does his best to make sure we have those. Bill Freimuth is with us. He’s the VP of Sales and Marketing for Centurion Brands, a company that’s been around for 10 years. Bill, I know you’ve been in the industry a lot longer than that. What do you make of all the growth in outdoor living?

Bill Freimuth:       Well, outdoor living as a category, it’s a very, very, as we know, a fast growing category. It’s a category that the green movement is helping everybody in the industry. People want to grow their own fruit, their own plants, their own you name it, they want to do it and they want it. The green movement, it’s just exploding. Another very, very popular movement is medicinal marijuana for the medical area. We’re designing tools for that area and we …

Tom Kraeutler:     Just for that area?

Bill Freimuth:       Just for that area and we can’t make them fast enough to keep up with it. There are 32 states now that have passed laws that you can buy this product. It will be nationwide very, very soon and that’s a boon area as well. 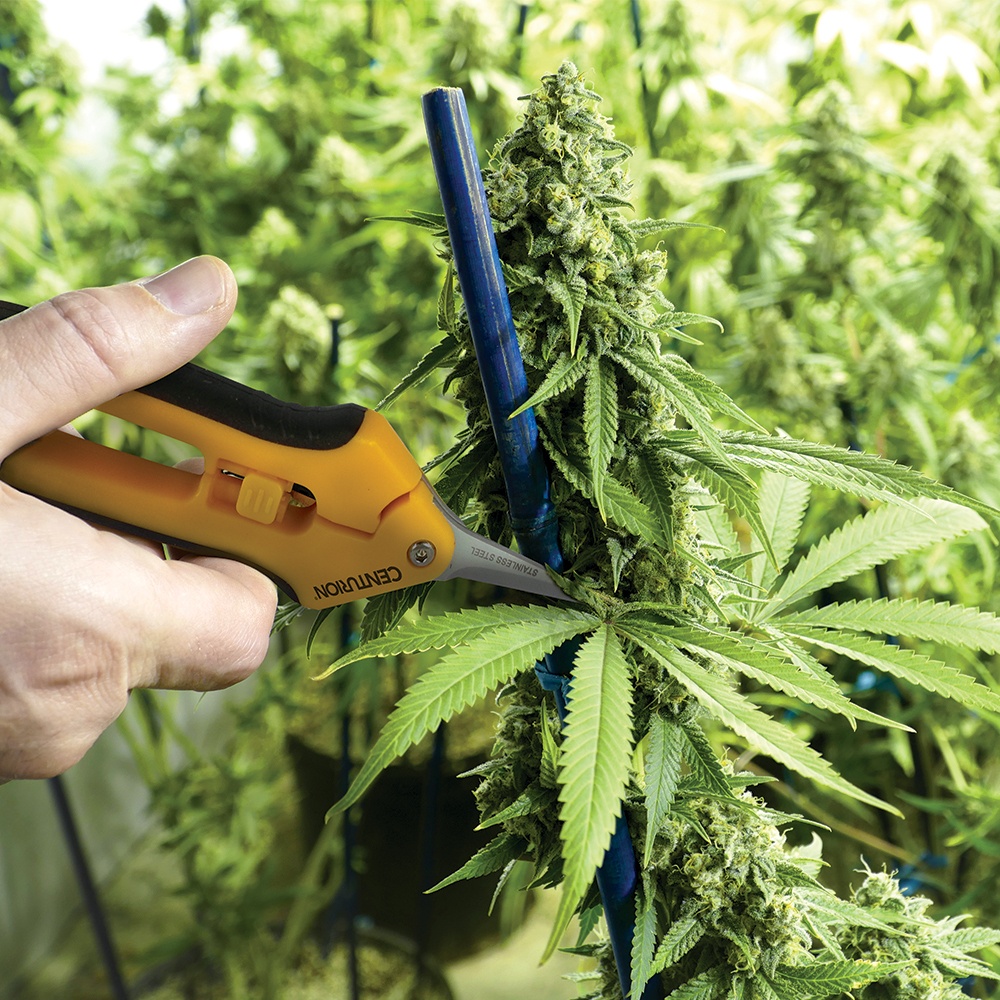 Tom Kraeutler:     Interesting. When you guys design garden tools, one of the things that we always notice in the industry is that having the right tool is as much about fit as whether a tool does its job. It’s got to fit the user. It’s got to do its intended job, so if you’re designing a tool to prune roses, it’s got to prune the rose. If it doesn’t fit your hand well, then it really adds to the wear and tear on you as the gardener handling that tool. I see that you guys have spent some time trying to master that.

Bill Freimuth:       Somebody making a living doing this, working in a garden center that’s snipping or somebody working outside in an orchard, you open it up if you want to cut something bigger, but now look at how far you have to drive that blade. Just think if you were doing this two to 3,000 times a day, you save a half a cut. It’s huge.

Bill Freimuth:       Very. Another very nice feature. You see how it’s ergonomically designed, so it …

Leslie Segrete:     It really fits your hand lovely and that the blade is like an extension of your finger itself.

Tom Kraeutler:     It’s natural that the aim doesn’t get off it because sometimes the blade cuts up or it tilts up or it tilts down. Your arm’s going one way. The blade’s going another way.

Tom Kraeutler:     This is an extension of your hand.

Bill Freimuth:       To that point, there are a number of suppliers of tools, garden tools per se, that don’t heat treat the blade or the hook. What happens? We’ve all cut a branch that was maybe a little too big and the branch or whatever you’re getting, whatever you’re cutting lodges here, and the reason for that is either the blade turns out. 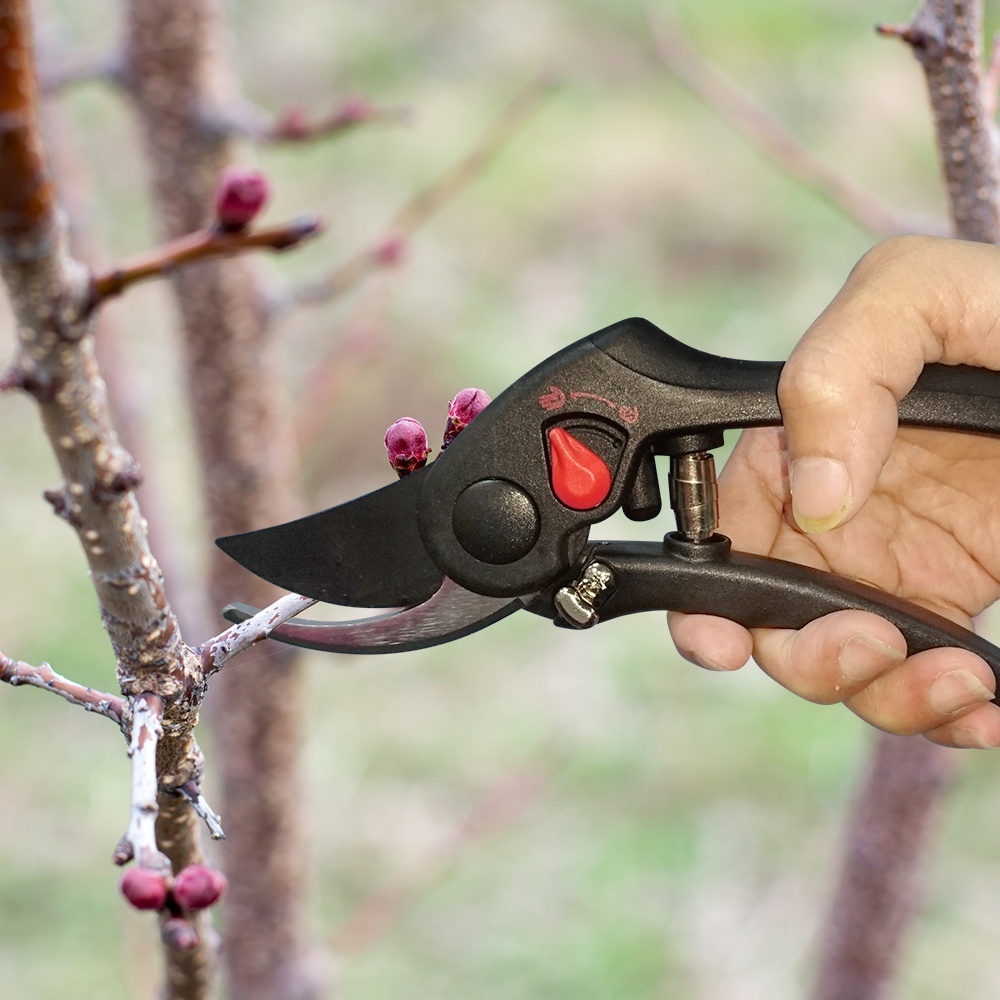 Bill Freimuth:       Or the hook turns out because it’s not heat treated.

Bill Freimuth:       If it’s heat treated, neither one will move. Very, very simple fix. There’s nothing more aggravating than to cut something and then try to pull the branch or what you’re cutting out of it.

Tom Kraeutler:     These fine features and these fine garden tools are really worth looking into when you’re making that decision. A lot of folks just think a pruner’s a pruner, a pruner. When you really get into it and you read the reviews and you listen to guys like you from the manufacture talk about why you built it the way you did build it, it really makes it worth doing that research, maybe paying a little more for it because it’s going to be comfortable for you, the tool’s going to last longer, it’s not going to wear you down, it’s going to be better for your plants.

Bill Freimuth:       Another simple little feature, this is little bumper. When it comes together, you don’t have a …

Leslie Segrete:     Bill, and I think what’s so important is your team is so smartly designing the tools and making them durable and it’s up to the pro or the home user to take good care of these items. You designed garden tools so they’re really easy to care for. What do you recommend for somebody annually or monthly? What should they be doing?

Bill Freimuth:       Well, the main thing that you should do is every time you use any type of cutting tool, whether it’s us or a competitor’s, any cutting tool, you’ve done your pruning, wipe it off and put a little WD-40 or a little light oil on it, it will just keep the action very clean, very smooth. There’s very little that can go wrong with a pruner unless you’re making a living.

Tom Kraeutler:     The point of coating it when you put it away is important because a lot of folks are so tired at the end of the day, they just throw it back in the toolbox or on the shelf.

Leslie Segrete:     Not that it’s so difficult to take care of the next day.

Tom Kraeutler:     When they pull it out the next time or a couple of weeks later, it’s stiff and that’s when they’re looking for the WD40. Put it on first, make it the last thing you do. Spray it down with 3-In-One or WD and it’s always going to be good to go.

Bill Freimuth:       Absolutely. Even the spring, we use a [inaudible 00:05:46] spring, stainless steel. It gets wet, you’re in, you’re cutting, and it gets wet. Stainless steel will rust over time if you don’t …

Tom Kraeutler:     Yeah. Well, because all stainless is not the same.

Bill Freimuth:       That’s true. Even in Florida and in California, salt water on stainless, if you don’t wash that off on your boat, you’re going to rust it.

Bill Freimuth:       No different with a pruner. 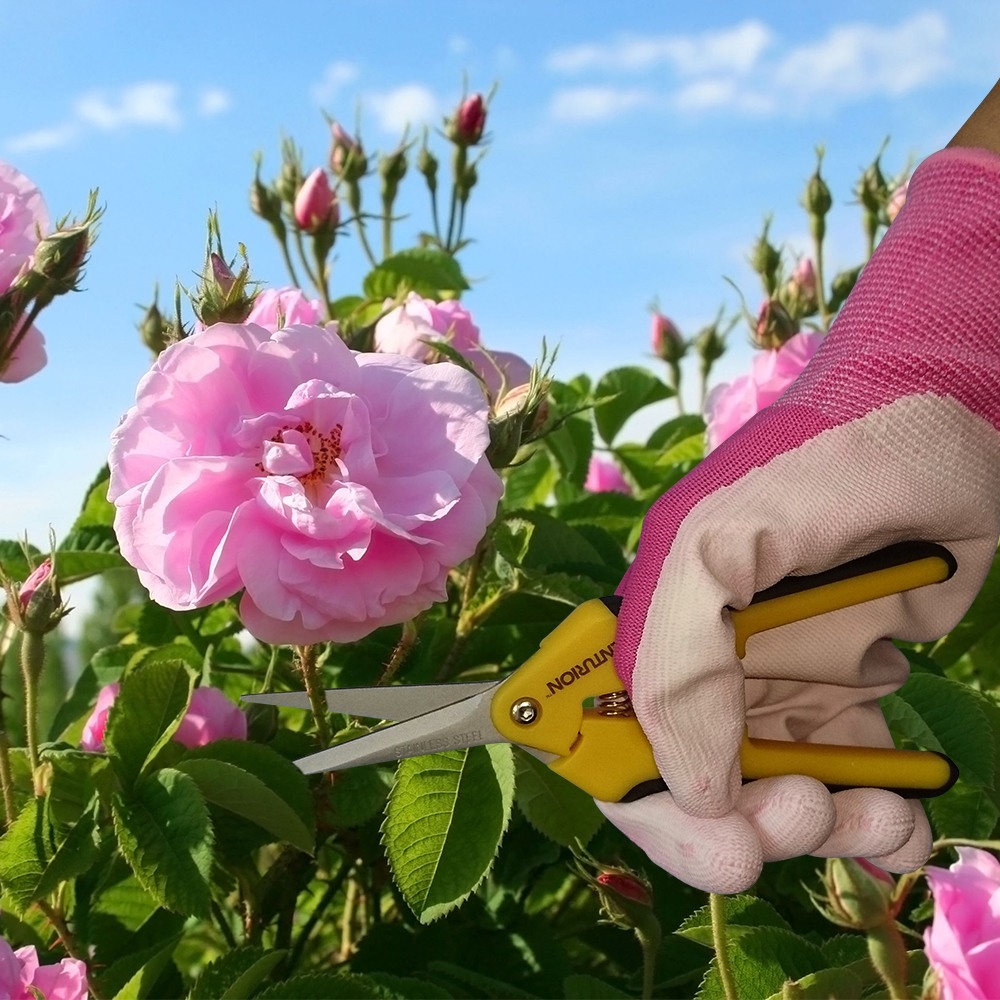 Tom Kraeutler:     Let’s talk about some of the other garden tools you guys make. I know you do gloves, you do shovels.

Bill Freimuth:       Any garden tools, or product you can think of, we do some place in the world. We’re very, very big in watery. Every kind of water nozzle, sprinkler, sprayer. We try to go into categories that are adjacent across the aisle from us. It just makes it easier. We have service people that kind of keep aisles clean do the defective and things of this nature, so it’s a lot easier if we’ve got categories adjacent to each other. We started with the pruning category and that’s what I came out of almost 30 years with Fiskars and anything to put an edge on a product. Then again, we’ve just expanded it because we do fire pits, we do gloves, we do a number of products. What’s nice about Centurion, you can buy about 12 different categories from one vendor.

Most companies do garden tools. That’s a vendor. Anther company does shovels. That’s another vendor. A company does gloves. Now when you go into work with a major retailer, you can sit down with a VP and the various buyers and say let’s put a program together, let’s fill up that 40 foot truck, and you can buy a number of products from one vendor.

Bill Freimuth:       The synergies of having a program is very, very good for us as well as the retailers that we’re dealing with.

Tom Kraeutler:     You mentioned fire pits. Man, they’re popular today. Aren’t they? What are you guys making? Are you making portable fire pits?

Bill Freimuth:       We make portable, we make fold up, we make fire pits that are very, very …

Tom Kraeutler:     How does that work?

Bill Freimuth:       Basically, we design it so the legs fold up.

Bill Freimuth:       Fold up under it and then you’ve just got the [inaudible 00:07:47] where you put your wood in and everything fits down into it. We’ve also got a little carrying case that it fits in.

Tom Kraeutler:     You can take it to the beach, take it camping?

Bill Freimuth:       Yeah. Or people that are going to the tailgate parties, very, very nice.

Bill Freimuth:       We do gas fire pits, which are coming on very, very strong.

Tom Kraeutler:     Yeah. They’re actually safer, I think, than the wood fire pits because I have wood fire pit, a portable that I love and had it since the kids were little. When you start that up, you’re talking two days, three days before the ashes are totally cool.

Leslie Segrete:     People forget that and they dispose of them so casually and it really can cause a lot of problems.

Tom Kraeutler:     Yeah. We’ve had those through rainstorms think it’s got to be out. No. You turn the ashes over, it’s still hot, can start a fire right away two days later.

Tom Kraeutler:     Yeah. That is a good safety point to make. Bill, thank you so much for stopping by the podcast today and filling us in on everything that’s Centurion Brands. We wish you the best of luck here at the National Hardware Show and we’re going to be following you guys.

Tom Kraeutler:     Bill Freimuth, Senior Vice President of Sales and Marketing, thank you so much for stopping by the Money Pit Top Products Podcast. Hey, if you’d like to learn more about Centurion Brands products, check out their website at centurionbrands.com.

How To Edge Garden Beds | Video

Live from the National Hardware Show, Part 2; Latest Trends in Home Improvement, How to Kill Weeds While You Sleep, How to Stop Mold Without Toxins, and More

New Trends in Outdoor Living, How to Prune a Hedge, Must Have Tools for Vegetable Gardening and more