You are here: Home / Bondic is the World’s First Liquid Plastic Welding Tool 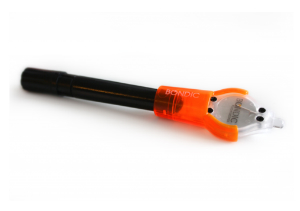 Leslie Segrete:    Yeah, things you didn’t even know you needed.

Tom Kraeutler:    And here is one of those, it’s called Bondic. B-O-N-D-I-C. And Bondic is essentially the world’s first liquid plastic welding tool that can bond, build, fix almost any material. With us to talk about, that is Robert Harbauer. He’s the CEO of Bondic. Hi, Bob.

Robert Harbauer:    Hi. How are you doing?

Tom Kraeutler:    So this is really a fun product and one of the reasons we love coming to this show is to discover products like this. So in a nutshell, explain how Bondic works.

Robert Harbauer:    Well, you know, you listed a lot of things it can do and people have to understand that what I’m doing is I’m making plastic. We live in a plastic world and things break, crack, shatter, drop and …

Robert Harbauer:    And that’s the sad part because it’s generally pretty new, pretty functional but if you could just fix that one thing, then it would work perfect. Or you buy something, you look at it and you go by design that’s not going to last. So you could actually improve it right on the spot. So what I have is, I have this little metal tin, and the reason it’s in a metal tin is because this fluid, this liquid which is a honey like substance, it feels like honey when you play with it …

Tom Kraeutler:    We should explain that the Bondic product itself it’s kind of the shape of a pen, maybe just a little bit less narrow than a highlighter.

Robert Harbauer:    And you have an LED on the opposite end.

Leslie Segrete:    Well, and I think a good descriptive point is that, you liken it to almost like getting a filling at the dentist’s office.

Robert Harbauer:    That’s actually where the technology came from. So my business partner is a dentist and he had a client in the chair who said, “You know, that stuff you’re using, can I get some?” And he goes “Yeah, sure.” You know? But at the dentist it’s a little vial it’s like eighty to three hundred dollars, right? Because it’s specialized for enamel in that, and he came back and said “listen, I need like a bucket of it.” He says, “A bucket? What on earth do you need that for?” And it was for an electronics application where you have a tiny little hair-like wire you have to mount with a microscope and you can’t solder, because the heat would wreck that component.

Robert Harbauer:    So he would put that tiny wire on this part of the chip, and then he would basically attach it with the liquid plastic.

Tom Kraeutler:    So let’s explain how that works.

Leslie Segrete:    And because it’s plastic it can still conduct.

Robert Harbauer:    No, it’s insulating. So the wire is touching, but then the plastic surrounds and becomes hard and then it grips it and holds it. So in this tube, it’s a squeezy tube, I have roughly two hundred drops. And so, people say “How long does it last?” It’s depending upon the application that you’re using. Right now what I’m doing is, I’m just squeezing the tube and I’m creating a drop. Just for the fun of it, right?

Tom Kraeutler:    Yeah, it looks like a clear, gooey liquid.

Robert Harbauer:    Yeah, and it doesn’t have any odor or anything like that. You can move it around, because it’s like honey, right? It’s staying there. If I hold this upside down, watch. Gravity will start to make it sort of fall.

Robert Harbauer:    But watch when I turn on this light. One, two, three, four. And I don’t know if you can hear this, but (tapping) that’s hard plastic.

Tom Kraeutler:    It is completely thick now, right. You basically turned it from a liquid to a solid in 4 seconds by applying a light.

Robert Harbauer:    Now I can keep adding to that, so I can shape things, I can make things. So let’s say I broke a piece of plastic. You know a classic one is a coffee maker. The lid that pops up and all?

Robert Harbauer:    Well, sometimes it breaks because the way you catch it in the dishwasher or a knife fell on it or whatever. I can make that hook again from new. Now a little trick, imagine if I rub my hands together, it’s two smooth surfaces, so it’s surface tension that’s holding that. If I take my fingernail on this smooth surface I can knock it off, so it’s like temporary. Right?

Robert Harbauer:    But if I sand it, if I make the surface rough …

Leslie Segrete:    You gave something for it to get into the crevices.

Robert Harbauer:    Even though it’s microscopic crevices, like you have probably an emery board in your purse, right?

Robert Harbauer:    So you could (laughs). Yeah.

Tom Kraeutler:    How did you guess?

Robert Harbauer:    So if you take it and scratch it, then the liquid will grab into those crevices and it will have more grip, it will be more permanent. So when you’ve got to do a larger area surface … You know what happens?

Tom Kraeutler:    It seems like it’s going to be a little bit of prep.

Robert Harbauer:    Yeah, and then it holds longer, right?

Robert Harbauer:    Have you ever had it happen where you had the tool and then you placed it besides something hot? Whether it was a branding iron or a torch or something? Now you’ve ruined your plastic handle, and it’s funny.

Robert Harbauer:    So file of that ugly part and then fill it in, and it’s good as new, good to go.

Tom Kraeutler:    And you actually had a demonstration with this where it can actually cure under water. That’s phenomenal, because it will even cure if what it’s trying to adhere is basically wet.

Leslie Segrete:    I was just going to say the fish tank.

Robert Harbauer:    Somebody came from Hawaii to the show, and he said, “I’ve got to buy some more”, and I said, “What do you use it for?” He says, “I’m a carpenter, and I fill in between, when I don’t do the crown molding perfect, I fill it in.”

Tom Kraeutler:    Oh, the seal in the joint.

Tom Kraeutler:    Right, because I’m so good at it.

Robert Harbauer:    And the other thing he did, imagine this, you know those LED’s strips that if you want to put underneath the kitchen cabinet?

Robert Harbauer:    Like, glue, it won’t work because it can’t really hold it, you cross the light. Tape is not going to hold, right? It’s going to take time. You cannot put a screw in it because it’s the electrical wire. He uses Bondic to mount all the LED lighting under kitchen cabinets, and all his trucks have it.

Robert Harbauer:    So, I don’t even know what the thousands of uses are, they keep changing, and keep changing. Everybody has their own.

Tom Kraeutler:    This going to be like a WD-40 story. A thousand-and-one uses, right?

Robert Harbauer:    That would be the dream.

Tom Kraeutler:    Yeah, there you go.

Leslie Segrete:    I mean it’s really amazing, so is it always this size applicator with this size light or do you offer it in a larger size for perhaps larger scale projects or usages?

Robert Harbauer:    Pros can get a larger version, and there’s a Bondic Pro now. But the goal is that as many people can get it as possible, because once you’ve used it people go, “No, I didn’t glue it, I’d Bondic’d it”. Or they’ll say, “Let’s try Bondic on it because other things have failed.” Right?

Tom Kraeutler:    So now they’re thinking of the possibilities, that you could use for this.

Robert Harbauer:    And you know what? It doesn’t dry out, because it’s not air cured.

Robert Harbauer:    This tin is neat because you’ll find it in the junk drawer or in the toolbox or whatever. You know, some people put magnet on it and stick it on the tool box. But when you need it, how many times has glue been dried? You know, it’s crispy, hard, you can’t use it for anything?

Robert Harbauer:    And then remember we talked about nails, if you have to repair a nail? We did a show and we asked these big, tough guys, “What do you use it for?” And he says “You’re not going to believe me.” And I said, “Well, tell me.” He says, “You know when I’m working every, once in a while I hit myself. I hurt my nail, I break it, and it’s really painful, actually, until it gets past a cure point.” So they’ve used it to put on the nail temporarily.

Robert Harbauer:    It gets a bit warm, for like one second. But then they can function [inaudible 00:06:44] Bondic. They can put out the glove and all that stuff.

Tom Kraeutler:    So that’s the tough guy, you said.

Leslie Segrete:    You can use it to repair leaks in pipes. I mean, I feel like I’m going to start thinking of a million ways that they can use it, and also then start wanting make things out of it.

Tom Kraeutler:    It can make things, and like a 3D Printer. It’s like a 3D printer in your pocket.

Tom Kraeutler:    Yeah, it’s really cool. The product is called Bondic. B-O-N-D-I-C, the CEO is Robert Harbauer and if you’d like more information about this product, you can go to their website, which is simply notaglue.com. That’s notaglue.com. Thanks, Bob.

Robert Harbauer:    Thanks a ton, guys.