Tom Kraeutler:    Coming to you from the 2015 National Hardware Show. Well, we’re going to talk about some tools now with Ryan DeArment. Ryan is the VP of marketing and sales for Channellock. 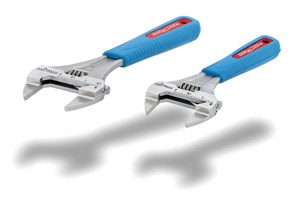 I got to tell you Ryan, I was first introduced to Channellocks by my father, who just loved it. It was sort of a go-to tool. Always telling me to get his Channellocks out of his tool box because you could do everything with it. Later on, I learned that they were also called Water Pump Pliers.

Tom Kraeutler:    There’s a lot of history there. Channellock has been around then for a long time. You guys have continued to innovate from those very first water pump pliers and you’re bringing out some new tools here at the 2015 National Hardware Show. What’s up?

Ryan DeArment:    Yeah. We’ve got a new set of adjustable wrenches. These are an expansion of a current set that we have. It’s a six and eight inch adjustable wrench. What’s unique about these is the eight inch plier wrench has a twelve inch head capacity on it. The six inch actually has a ten inch head.

Tom Kraeutler:    So, basically, it’s a short handle, but it really handles a quite wide fastener.

Ryan DeArment:    Correct. The bodily innovation in this four [inaudible 00:01:25] that allows us to open that adjustment in the head that far without the overall capacity of the head or dimension of the head being too big. It allows you to get into a lot of tight, hard to reach spots.

Tom Kraeutler:    I also noticed that the sort of business end of this is off-set, so it’s kind of cut back so you can get into a really tight spot if you’re trying to operate a fastener. Is that correct?

Ryan DeArment:    That’s right. The new set that you have now, the head’s been milled down and it’s forty percent thinner, so it really gets you into those narrow places that you might just need a special spanner wrench.

Leslie Segrete:    I tell you, the adjustment mechanism, it operates so smoothly. I love that you have all the demarcations, the dimensions of whatever it is you’re trying to fasten or unfasten. It really operates lovely with one hand and you know you’re going to get a good grip on it.

Ryan DeArment:    Yeah. The machining of the tools or the adjustable wrenches, you know, it’s precision ground facings. They graduated both metric and empirical on both sides for bold identification. Because of the parallel facings, once you adjust them and set them to a certain size, you don’t have constant re-eject them as you take the wrench off the bolt and put it back on the bolt and you’re not constantly messing with that [inaudible 00:02:36].

Ryan, I also noticed that you guys have put a lot of design into the handles to make them easy to hold onto and comfortable …

Tom Kraeutler:    They do. It really reduces the fatigue of using a tool like this.

Ryan DeArment:    Yeah. The cushion grip allows you to really push on them without causing some pain to the palm of your hand. It’s really a great feature and it’s easily replaced if it wears out, or ends up getting cut, or ruined in one way or another.

Leslie Segrete:    It just feels like it’s balanced so nicely; like it really fits nicely in your hand. Now what I think is interesting, and tell me, is this the first time you’ve partnered with the fire department to create a tool specifically for their usage? You’re introducing the Channellock 86 Rescue Tool. 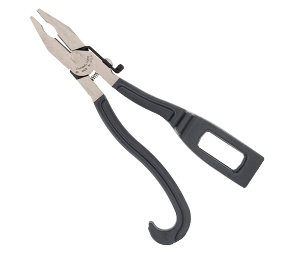 Ryan DeArment:    Yeah. This is the newest version of our rescue tool line. It’s actually our fourth. We started probably about ten years ago with our local fire chief. He brought us an idea that basically took four to five commonly carried tools by firefighters that he had hand welded in his garage [crosstalk 00:03:45], and actually we’re getting back to that original prototype that he brought us …

Ryan DeArment:    Our first versions were a lot longer, that we figured more as a demolition tool, wrecking bar kind of thing that they were going to get. It uses pry bars. They’re going to get used up, punched through walls, whatever they needed, so, we added a lot of beef to them. But, a lot of the feedback was that they wanted them smaller and lighter.

Ryan DeArment:    Especially when you’re getting into the metropolitan areas. These guys are trying to eliminate every ounce they can out of gear because you can’t take the elevator up.

Tom Kraeutler:    So, the [crosstalk 00:04:17] tool really does a lot in one tool. Of course, you’ve got the pliers, which is obvious. You also have sort of the curved hook end which the firefighters use to assemble and dissemble hoses …

Tom Kraeutler:    There’s couplings. I’ve also got a small pry bar. What I think is really neat is you have sort of the square shafted wrench in the end, which firefighters can use to quickly turn the gas off. Because, when they go into a building, the first thing they want to do is shut the gas down. So, that’s all one handy plier, really.

Ryan DeArment:    Yeah. Another little feature, if you look at the handle, kind of has that key design. We did that to eliminate a lot of the weight.

Leslie Segrete:    They have no problem operating it with the gloves on?

Ryan DeArment:    No. A lot of the feedback that we got is that they wanted it spring operated so it’s one hand operation and they wanted a class so it could get hung up in their pockets.

Tom Kraeutler:    Makes a lot of sense. So, what else is new for Channellock? What are you doing for consumers this year? For example, if we’re looking for a Father’s Day gift, what kinds of products do you have?

Ryan DeArment:    We’ve got some new mechanics tool sets. It’s a really cool, I think a 24 piece set, that has a pass-through style socket. So, whenever you’re working with some all thread or, some long bolt style that you can’t get a socket on, this will actually allow that bolt to completely pass through. So, you have unlimited depth from the socket.

Tom Kraeutler:    Otherwise, you kind of run out of space when you’re using the socket.

Ryan DeArment:    And then, you’ve got to get the old, adjustable wrench or standard wrench out and keep constantly wrenching.

Tom Kraeutler:    What’s the distribution for like; Home centers and hardware stores?

Ryan DeArment:    It’s so new right now, there’s few home centers that have them. Some of the more independent guys and the online sales.

Tom Kraeutler:    Terrific. Ryan DeArment from Channellock. Thank you so much for stopping by the Money Pits Top Products Podcast. 2015 National Hardware Show.

Ryan DeArment:    Thank you. If you’d like more information, you can go to the Channellock website at channellock.com.