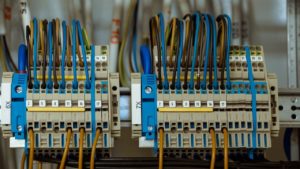 Tips to Run Wiring Through Your Walls: DIY or Pro?

Tips to Run Wiring Through Your Walls: DIY or Pro?

LESLIE: Alright. Next up, we’ve got Mike from Arizona who needs some help with some fixtures in a studio. What can we do for you today?

MIKE: I’m a producer and I was looking at a property that I’m thinking about investing in with a partner of mine. And there’s fixtures in the wall that look like they could be – the building used to be a kitchen.

MIKE: So I’m wanting to change those fixtures over to where I can plug in my equipment and stuff into the wall. And I was wondering what I would be looking at, as far as hiring someone to do it or doing it myself.

TOM: Well, first of all, when you say fixtures and you’re talking about plugging in, you mean electrical fixtures in the walls?

MIKE: No, no. The fixtures in the walls are for gas and stuff.

TOM: Oh, like wiring just for whatever gear you want to plug in?

TOM: Well, first of all, if it’s had all of that work done, you’re going to have to make sure that everything was properly disconnected and discontinued and essentially behind the walls. And so if stuff’s coming through, that’s going to involve some repair work. Depending on how much stuff is coming through and the condition of the wall, it may possibly be easier for you, for a lot of reasons, just to remove the drywall and do all your work and then re-drywall that particular side of the room rather than having to run patches for the wires and stuff.

MIKE: Here’s the thing. The building is actually made of brick, like a stone. And there’s no exposed wires or hoses or anything. It’s all inside the wall. And the fixture coming out is cone-shaped. You plug a tube in there to get gas and stuff.

TOM: Mm-hmm. Well, it sounds like science class. Yeah. That’s kind of crazy. I can’t imagine what that was for. I’m thinking of the old Bunsen burners we used to have in science lab, that kind of thing. Yeah.

TOM: Well, look, if you can – it is possible to run wiring inside a wall like that, even if you don’t have access to it. Electricians have lots of sneaky ways of doing that and getting the wires where they need to go.

Is it on a basement?

TOM: It’s solid slab? OK. Well, it is possible to run the wiring. It’s trickier because you don’t have access underneath and I don’t know what kind of access you have above. But there are tools to do that.

So I think what you need to do is to first create a very detailed sort of specification of what you want to accomplish in that space. And after you’ve really fleshed that out, then start bringing in some contractors. Because with this kind of a project, Michael, if you don’t have a good idea of what you want to accomplish and you start bringing guys in, they’re all going to have different ways to approach this.

But you basically want to say, “Look, I need power for this and I’ll have equipment here in this kind of space. I need to get these pipes out of the way and make sure they’re disconnected.” List out those types of specs and then bring in the pros and get some prices to do it.

It’s a project that certainly can be done but the complication level, I can’t really tell you because I’m not seeing it. But knowing that there’s nothing underneath – see, reason I asked you if you had a basement – because if you had a basement, you can go downstairs, run the wires and bring them back up. But because it’s on a slab, it becomes a lot harder.

MIKE: Well, I know that in the back, there’s a closet where the breaker and the water heater and everything are over there.

TOM: Well, that might be where the panel is. There’s got to be a way to get the wires there. Or you may be able to tap off the existing wires that are already in that space. You may not have to run new wires.

What kind of equipment are you going to use here? What are we talking about?

MIKE: Well, the plug-ins I’m using are XLR cables. And do you know what a MIDI cable is?

TOM: Yeah. So you want to hardwire that stuff?

TOM: OK. Well, you certainly can do it. It’s a little trickier because there’s no access. But it’s certainly doable.

TOM: Yeah. I mean with that old building and your particular type of needs, I would say one of the most important electrical things to focus on is grounding. Because if you don’t have good grounding with that kind of wiring, you’re going to have all sorts of line-noise issues and ghosts that you’ll be chasing. And being in the recording business, you know what I mean.

TOM: Sometimes you do everything right and then you’ve got – you find out that there’s one bad transformer somewhere 12 feet away that – you just screw up your session.

MIKE: Yeah, I’ve blown I don’t know how many keyboards that way.

TOM: Yeah. Alright. Listen, thanks for giving us a call. Good luck with that project. Sounds like a real fun project to take on.

How to Replace a Light Fixture