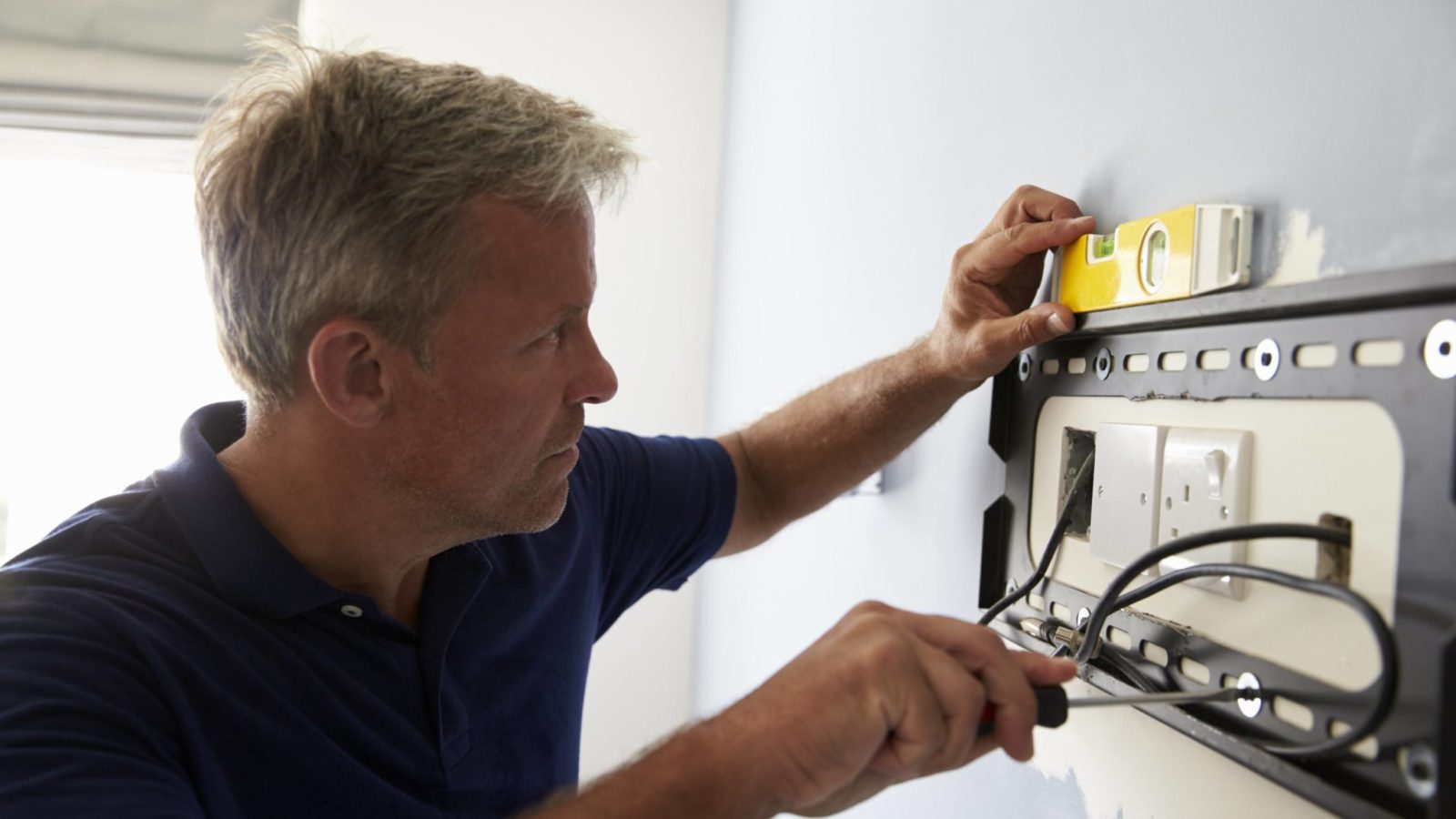 Adding an outlet behind a wall mounted TV is a straightforward job you can do on your own with just a few tools. This intermediate-level project will walk you through how to run electrical cable inside your wall, extending the circuit of your current outlet to a new one directly behind your TV. It’s inexpensive, quick, and will give your TV a clean, professional look. Here’s what you’ll need:

When taking on this DIY task, be sure to equip yourself with the proper safety gear. Throughout the video, we’ll alert you regarding when you should and should not use the safety gear.

Before you begin, please note that you should never hide your TV’s electrical cord in the wall. Doing so is a fire hazard in violation of the National Electrical Code.

Locate new box. Your existing outlet box will be nailed or screwed to a wall stud. Use a stud finder to determine if the existing box is nailed to the right or left of that stud. The new box will be installed above the existing box, but on the same side of the stud.

Keep the remodel box you’ll be using, sometimes called an old work box, at least one inch away from the stud. The box has two wings that will open inside the drywall to clamp it in place.

Cut new hole. If your new box includes a template, use it to trace cut lines on the wall. If a template isn’t available, trace the face of the box on the wall. Cut the hole with a jab saw. Go slowly, being careful not to hit any existing wires or pipes running behind the same wall.

Push cable. Unscrew and remove the cover plate from you existing outlet. Disconnect the two screws attaching the outlet to the box. Then carefully pull the outlet out. The box will have one or two cable holes at the top. Each will be covered by a plug or a tap. If the box is metal, you’ll see a metal clamp. Loosen the clamp screw. If it’s plugged, punch out the plug for one of the holes with the tip of the screwdriver. You may have to tap the screwdriver handle with a hammer to do this. If the box is plastic, pry open one of the holes.

Prepare ground wires. If your existing box is plastic, disconnect the bare ground wire from the green terminal on the outlet. If your box is metal, you’ll see a short bare wire connected to a green grounding screw in the back of the box. Be sure to check the packaging of your wire connectors to make sure they’re designed for the number of wires you will be connecting as well as the wire gauge you’re using.

Prepare wires in existing box. Use a cable ripper to slice the sheathing on the new cable. Peel the sheathing back and remove it with a utility knife. Connect the new cable’s bare wire to the other bare wires with a wire connector. If necessary, replace the connector with one designed for more wires. Use a wire stripper to remove ¾ of an inch of insulation from the new black and white wires.

Making middle-of-run connections. Cut three six-inch pieces of wire, one white, one black, and one bare to use as pigtails. Strip ¾ of an inch of insulation from each end of the black and white pigtails. Using needle nose pliers, twist one end of the white pigtail with the white wire you disconnected from the terminal and the white wire from the new cable, making sure the exposed portion of each wire is the same length. Secure the wires together with a wire connector.

Install new box. As you push the box into the drywall opening, pull the cable through a hole in the bottom of the new box. Engage the clamp wings by tightening the two screws behind the drywall. Tighten until the box is secure.

Install new outlet. Remove the sheathing from the new cable inside the box. Strip ¾ of an inch of insulation from the black and white wires, making hooks on all three. Connect the bare wire to the green outlet terminal, connect the black wire to one of the brass terminals, and the white wire to one of the silver terminals. Fold the wires into the box. Screw the outlet to the box and install the cover plate with the screws provided. Turn on the circuit breaker connected to your new outlet and use your circuit tester to confirm your new outlet is live.

Plug your TV back in, and enjoy a wire-free view!

Is Tearing Down a Wall a DIY Project?

Water Leak Through Basement Wall Crack: How to Stop