In a recent study conducted by researchers at the University of Colorado at Boulder, shower heads were found to contain bacteria potentially dangerous to those that had weakened immune systems. Moreover, the researchers found that not only will cleaning with bleach not kill the bacteria, but in one case the levels were found to be three times higher post cleaning.

While the risk to those in good health is low, the question remains how can a shower head effectively be cleaned? 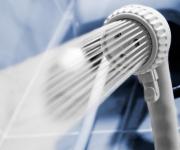 According to an FAQ document provided by Laura K. Baumgartner, Ph.D., a researcher who worked the project, shower heads are full of nooks and crannies that provide an ideal home for bacteria and other microbes. This also makes cleaning them very hard. Even though products with bleach remove many microbes, these mycobacteria grow back (and chlorination does not keep them out) after cleaning.
For most people, this is not really a concern. If you are immune compromised, you might want to consider changing out your shower head regularly. Additionally, microbes attach more easily to plastics than metal – if you are concerned, you may want to hunt down an all-metal (not metal-coated plastic) shower head.
However, Baumgartner suggests that people who have an immune issue (or are otherwise concerned) can:
Most importantly, the researchers do not believe that taking a shower is dangerous.  The best practice is to simply stay outside of the shower when you first turn it on, as that first blast may contain a higher load of bacteria.
Click here to listen to an interview with Laura Baumgartner.