LESLIE: Well, one focal point of any old home is, of course, the windows. You know, they’re big, beautiful and also heavy. And they rely on a system of counterweights to help you raise and lower them. 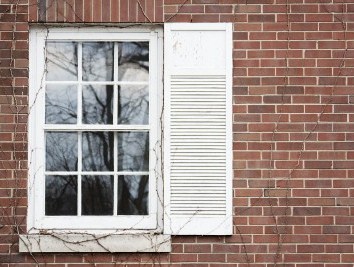 TOM: And just like anything else with an old house, occasionally the cords supporting those weights can break and you’re left to resort to the old stick-in-the-window method to hold it up. But it doesn’t have to be that way. Tom Silva, the general contractor from TV’s This Old House, is here with the fix that will allow you to toss the window stick away once and for all.

TOM SILVA: Well, thanks, guys. It’s nice to be here.

TOM: And window construction has changed dramatically from the old days. So, tell us about how windows used to work and how they still do today if you’ve got an old home with its original windows.

TOM SILVA: Right. Well, windows work on a balancing system. Inside the weight cavities – in other words, behind the casing – there are four weights, two on each side.

TOM: And this is to the left and the right of the window: basically, the wall kind of right alongside of it.

Well, what happens is the weight is held into place to the window with a rope. And over time, that ropes dries out and breaks and then you’ve got to replace it.

TOM: And that’s when you have the window that doesn’t really stay up. It feels very heavy. It can get dangerous.

TOM SILVA: And the rope is probably the most common.

TOM: And so, for that, you’re basically going to take your casing off to expose where that rope broke and kind of rethread it?

TOM SILVA: Well, actually, you don’t have to take the casing off.

TOM SILVA: You’re going to take off what is called the “stop bead.” The stop bead holds the sash into the opening. You need to take the stop bead off and if you live in an old house, it’s usually three or four screws. You take the screws off, you push the window up enough to get it out of the opening and then you’ll see there’s a little door on the left and the right side, held into place with one screw. You loosen the screw and the little door comes out, drops down or could – picks up, depending on how the company made them. You get that out of the way, you can reach in and pull the window weight out.

Now, you want to make sure that you untie the rope that’s there. And now you have to snake down a new rope from above to reattach it to that window weight.

TOM: So, that’s interesting. So even way back then, the manufacturers designed a way to replace that rope if it was necessary.

TOM SILVA: Absolutely. Because they knew it was going to wear out.

And then you just want to make sure that you attach the rope at the right dimension. You want to get the rope the right length so when you open the window, the weight isn’t touching the bottom.

TOM SILVA: So, once you’ve figured all that out, you put the window back into place. Now, you can use the rope or you can use a chain. A lot of people like to use the chain because they feel that once they do the chain, it’s not going to fall apart or rot.

LESLIE: Do you feel any sort of difference in how the window operates, between the rope and the chain?

TOM SILVA: The window with the chain is noisier when you open and close it. But it’s opening once and closing once, so it’s not like it’s up and down and going to keep you up all night.

TOM: Yeah. Now, if you didn’t want to go through the process of replacing the rope with a chain, are there ways to sort of replace jambs? I remember seeing, I guess what I’ll call sort of a “pressure jamb,” where it kind of squeezes the sides of the window. You pull the sash out, you put these new jambs in and slip the whole thing back in so that it’s sort of spring-loaded and holds the window in place.

TOM SILVA: Right. Well, they have what is called a “spiral balancing system.” And then, basically, they go into an aluminum or a vinyl track. But there is absolutely no insulation value to those except they basically are the balancing system. You attach them to the underside of the window. You have to put them in place before you put them in the window. You hold them together; you have to be a little bit of a contortionist. You put it into the opening, tilt it up and then the window is balanced.

The way you adjust the balance of the window is the tension on the stop bead when you put it in. So, in other words, when you let the window go, if it pops up, you have to take the stop bead and push it a little bit tighter to the window so that it moves the way you want it to move.

TOM SILVA: So it’ll stay where you put it, basically.

TOM SILVA: Yeah. It’s not that difficult. It sounds a little tricky but it’s basically just applying pressure to the stop bead.

TOM: It sounds like it’s almost as much work as just redoing it the way the manufacturer intended for the window to work.

LESLIE: Mm-hmm. So you probably do this a lot when you’re doing the repairs on This Old House, because you want to keep the authentic window to keep the historical aspect of the home in those situations. But you also want to boost the insulative value.

TOM SILVA: I do want to increase the insulation variable. What I do on an old house – I like the weights and pulleys. I love the old windows. But I then have to figure out a way to insulate behind that cavity. And lots of times, what I do is I insulate with a polyisocyanurate rigid-foam foil-faced and basically 1 inch or a ½-inch thick. And I just remove the casing because I now have the thickness of the plaster which is, in most cases, ¾ to 1 inch. So I can then sandwich tightly, in between the plaster and the casing, a piece of isocyanurate foam and I put my casing back on. I now have a window that is much more efficient.

You still get the draft that comes out of the pulley, where the rope goes, but it makes a huge difference in the window. And then I just spray-foam underneath the apron and over the header.

TOM: So it doesn’t matter if the window is old or new, there is a way to improve its efficiency.

TOM: And that’s how you do it. Tom Silva, the general contractor on TV’s This Old House, thanks so much for stopping by The Money Pit.

How to Fix a Stuck Window

Home Improvements Skyrocket, How to Repair Broken Sash Cords, How to Budget for a Move and more

How to Repair a Broken Window

How to Install a Storm Window

How to Replace Old Weighted Windows