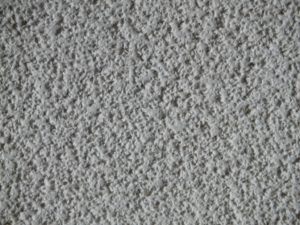 LESLIE: Now we’ve got Charlotte in North Carolina on the line who has got a popcorn ceiling that doesn’t have butter on it and wants to know how to cover stain in popcorn ceiling.

Charlotte, tell us what’s going on.

CHARLOTTE: Well, what happens now – we have a brown stain on the ceiling from the leak but we’ve had the leak repaired, of course. And it’s a popcorn ceiling. I’ve always hated this popcorn ceiling; I’m not opposed to getting rid of it. But I’m just wondering, what’s the best way to make the repair here? Because I’m afraid if we just take off the section where the stain is, it’s not going to match anymore and it’ll – you can – it’ll be like a repaired look. What would be your suggestion?

LESLIE: Now, is it truly a popcorn ceiling? Like when you reach up, you sort of end up with remnants of it? Or is it like a textured stucco ceiling?

CHARLOTTE: Whatever that drywall is that they kind of make and they spray on the ceiling.

TOM: Yeah. So, here’s the thing. You’ve had the roof leak. The roof leak is now repaired?

TOM: Has it physically damaged the ceiling or are you just trying to cover stain in popcorn ceiling?

TOM: Alright. Well, let’s ignore that for the moment. What I would suggest you do is to use a good-quality primer and repaint that ceiling.

Now, if it’s just a very limited area, you could prime just the stain and leave the rest. If it’s a bigger area, you’ve got to prime the whole ceiling. But if you use a good-quality primer there, like a KILZ or a B-I-N or something like that, then that should seal in the stain and you could put paint on top of that to cover stain in popcorn ceiling. You will have to paint the whole ceiling if it’s not been done recently but if you seal with a primer and then paint it, that’ll make the ceiling stain disappear and preserve the popcorn.

Removing the popcorn, at this point, is just a whole lot of work but it sounds like it’s really not necessary for you to do, unless you just don’t like the look of it.

CHARLOTTE: Thank you very much. That’ll help a lot. I appreciate it.

TOM: You’re welcome, Charlotte. Thanks so much for calling us at 888-MONEY-PIT.

Tips to Get Rid of Popcorn Ceiling and Make Smooth

How to Cover Up a Persistent Water Stain

Bathroom Ceiling Stains: How to Remove and Paint