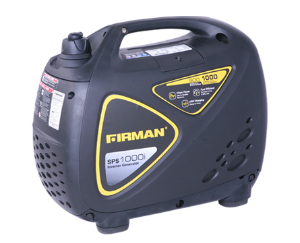 Tom:    Broadcasting from the National Hardware Show in Las Vegas, Nevada. We’re going to talk right now about a new category in generators, one you haven’t seen a lot of but one company is doing a lot with and that’s Firman Generators. With us to talk about the new inverter technology is Roland Jackson. Welcome, Roland.

Tom:    So many of us are familiar with the basic gas generators. How do inverter generators differ?

Tom:    It’s more consistent. It’s very steady. You’re not going to get any dips or edge in the flows.

Roland:    Correct. You don’t get the fluctuations, and that’s big when you’re talking about consistent power for your appliances. You want a consistent energy source. That’s why the THD, which is the distribution of the energy is less than 3 percent on your inverter. With your inverter, it allows you to run a computer, you can run your flat screen TVs, just depending [crosstalk 00:01:28].

Leslie:    Without worrying of surges and …

Roland:    Without worrying about the surges.

Tom:    When I was doing a lot of construction work years ago, and we had generators, and whenever you fired up your circular saw, the generator would increase in revolutions to supply you more power. A saw is pretty forgiving but like you say, a computer is not. With inverter technology, that would never happen because [crosstalk 00:01:48].

Leslie:    I think it’s interesting because you’ve got smaller sizes, they’re more lightweight, so if you’re using this on a job site, it’s much more transportable.

Roland:    Much quieter. The average generator is about 75 to 80 decibels. A inverter is around 58.

Roland:    You could imagine yourself where you’re on a campsite, you’re on a boat where now you can barely hear the generator versus if you’re on a normal campsite with …

Tom:    Because it’s a smaller engine, I imagine it’s quieter and as a result of that, it probably uses less fuel too because the engine is smaller.

Roland:    It’s far more fuel efficient. A 2,000 watt inverter, let’s say at 50 percent load, you could probably go between 7 to 9 hours of usage with that inverter.

Leslie:    With your inverters, what kind of sizes are you offering? Is it similar to the sizing or the distribution that you’ve got from a regular generator?

Roland:    With a regular generator, you’ll have sizes from 1,500 watts all the way up to let’s say, 10,000 watts. Right now, our inverters, we’re looking at a 1,000 watt inverter. Then also a 2,000 watt inverter. Then within the next year, we’re looking to expand that wattage because we see that’s where the industry is going just because of the convenience for the consumer. They can use that every day. They can use it for boating. They can use it for fishing, hunting, camping. I was talking with Tom, The Boy Scouts when they’re going out camping and hiking, that’s a great item for them to use and take out during their activities.

Tom:    Is the technology more expensive compared to …

Roland:    Somewhat, right now, but as we sell more, as the industry sells more, you’re going to see the prices come down.

Leslie:    What are the prices?

Tom:    Roll back, yeah. Terrific. Roland Jackson from Firman Generators telling us about the new inverter technology. Where can we go for more information?

Roland:    For more information, you can go to www.firmangenerators.com.

Roland:    Thank you. I appreciate it.