How Generators Protect Your Home from Power Outages

How Generators Protect Your Home from Power Outages

LESLIE: Well, with an aging electrical grid and severe weather seemingly more prevalent than ever, getting caught without power is no longer the rare and occasional occurrence. 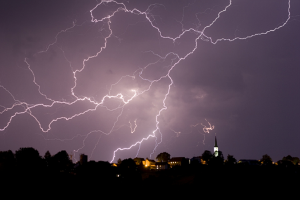 TOM: So what options do homeowners have to take matters into their own hands? Well, it turns out there are lots. Here to tell us how to have backup power always at the ready is This Old House electrical contractor Scott Caron.

SCOTT: Hey, guys. Thanks for having me here.

TOM: So, homeowners really have more options than ever when it comes to backup power, don’t they?

SCOTT: They do. There’s two basic ones: portable and automatic. The portable generators, they’re usually gasoline-powered. And the range of the power they provide? Usually very small to pretty good size: about 7,500 watts, which is the maximum on a portable. But they’re gasoline-powered. So with gasoline storage, you have your problems. It’s got a short shelf life. You’ve got to check the oil a lot.

TOM: And you may not be able to purchase it if the power is out in the neighborhood.

SCOTT: That’s right. If it really gets to that point, you’ve got to store gasoline on your property, which isn’t always a great thing.

But of course, they’re very affordable. You can take them camping with you, if you like, if they’re small enough, tuck them off into a shed or a garage when you need them. You roll them out. You’ve got to start them up, unless you’ve got a battery and you’ve got to keep that charged. There’s all kinds of situations like that that come up. And they’re pretty noisy and they do create fumes.

LESLIE: Now, I know post-Hurricane Sandy – you know, Tom and I are both from the Northeast, as you are. In my neighborhood, the arrival of automatic standby generators was just 10-fold from the normal appearance. I mean it’s amazing how convenient they are and quite frankly, they’re getting more affordable.

SCOTT: They are. They’re coming down in affordability.

Now, an automatic standby generator runs on either natural gas or propane. People ask a lot if they can run on diesel. They’re just not really practical in the home size, just because of the maintenance and upkeep. But they’re completely automatic.

What happens with an automatic setup is, basically, when the lights go out, the generator comes on in about 8 to 10 seconds. That’s really all you have to think about. They do require one year – every year, we like to put our hands on them and keep them maintained, do an oil change just to kind of see if any rodents are living inside of them. That’s the big thing. But they come with a cost. They tie into your main electrical system permanently. And because of that, you need an electrician to do it and it’s not an easy job.

TOM: Now, both portable generators and standby generators use a transfer switch of one type or another to basically make that change from street power to generator power. What do we need to know about those switches?

SCOTT: So, that’s a great question, Tom. The biggest problem that anyone has with generators is backfeeding the utility company. Those guys up on the poles that are trying to restore your power, the last thing they need is to have the electricity coming back from your house and causing them hazard. So there’s a transfer switch.

And what that does – it takes the utility power that normally comes into your home, disconnects it and makes it so that your generator is now providing power to your home. And that all happens completely automatically. Once the power is restored, transfers back from generator power and now you’re on utility again.

LESLIE: Are there any other tips or ideas that we can do to our homes to sort of protect us from further power issues?

SCOTT: Yes, there is, Leslie. We have surge protection. So, I’m losing power. There’s also a problem of overpower. And the utility companies are really good. However, once in a while, something gets sent through that line that’s not supposed to, meaning an overpower. And what can happen with electronics – you’ve got very sensitive equipment. It can get hit, as we call it, and the surge will actually burn out the electronics. And that’s not great.

So we protect it at the main electrical panel with a whole-house surge arrester. And that arrester is wired directly into your panel by an electrician. Does a really good job of protecting your home. However, we also recommend a secondary surge suppressor. Every time you plug in that nice computer or the flat-screen television, we like to secondary protect it, which will make it so that something happens, you have two shots of saving that appliance or piece of equipment.

TOM: Good advice. Scott Caron, the electrician on TV’s This Old House, thank you so much for stopping by The Money Pit.

SCOTT: Hey, thank you for having me. I appreciate it.

Backup Heat for Power Outages: What are the Best Options?