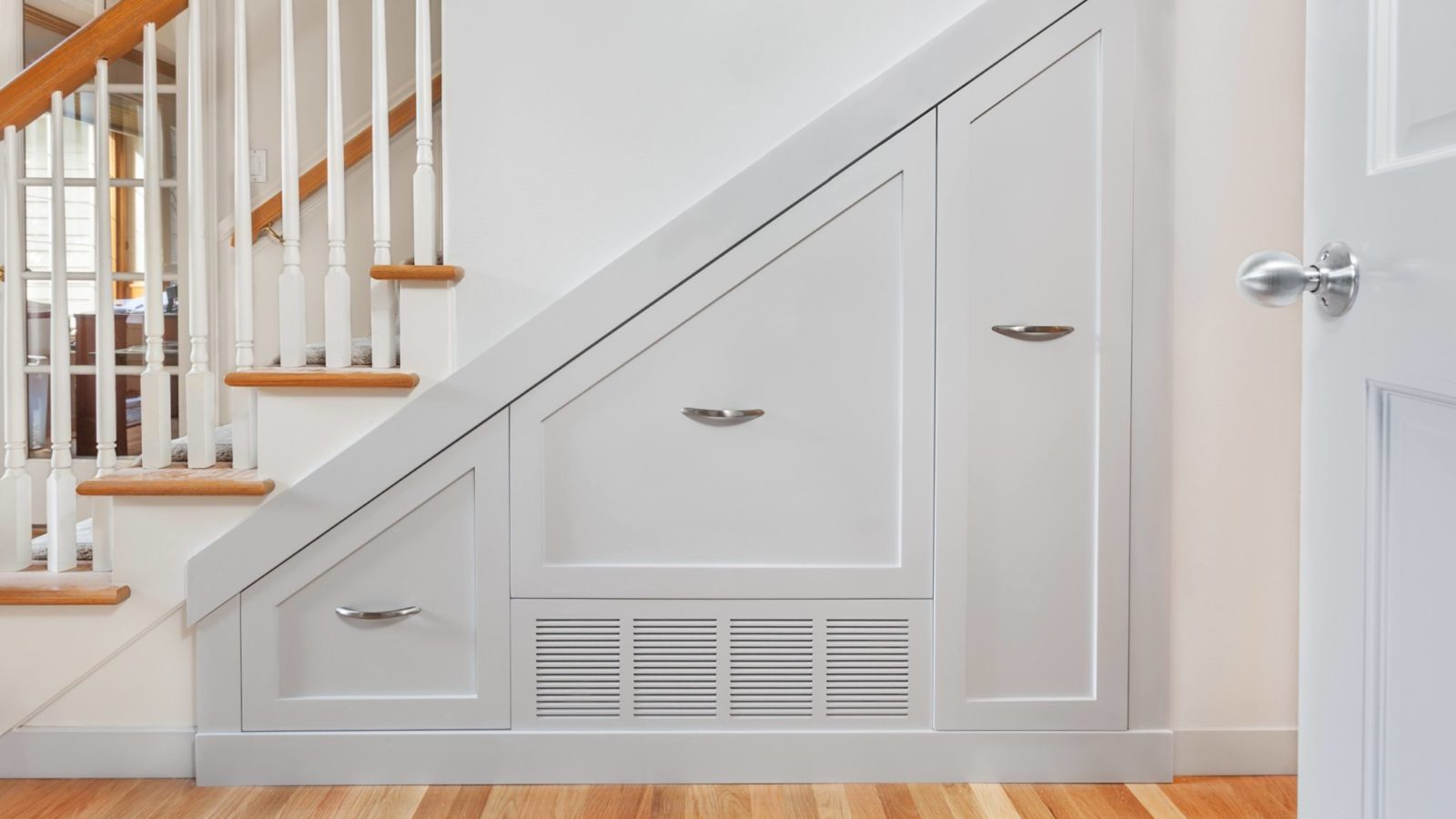 LESLIE: Well, we all need as much storage space as we can get in our homes or they begin to quickly look very cluttered. You know, there’s nothing like the feeling of a place for everything and everything in its place. 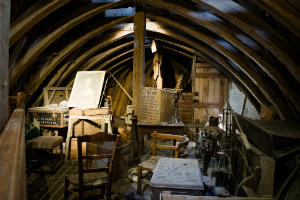 TOM: Ah, yes. But if you’re feeling like you’ve exhausted storage solutions in your home, there might be some places you hadn’t thought of. Here to talk about those hidden storage spaces is This Old House general contractor Tom Silva.

TOM SILVA: Well, thanks. It’s nice to be here.

TOM: So, by virtue of the way a home is built, there ends up being sort of a lot of nooks and crannies for storage. And some of those could be hiding in plain sight, right?

TOM SILVA: Absolutely. I think the biggest place that I can get a lot of storage out of is under stairways.

It’s amazing that people don’t utilize that space more. I remember years ago, they used to put the phone in the desk under the stairway because people would talk on their phones. But now, who uses a phone that way?

TOM SILVA: But a staircase, you can make all kinds of storage opportunities. You could put drawers. We build – we’ll close the wall in a little bit but we make drawers that are deep and they’ll run right across the whole length of the stair and they pull out. You would be amazed at what you can store under a stairway.

TOM: So you can, essentially, have a drawer that’s 2 or 3 feet deep.

TOM: It’s almost like the bins that you slide under beds.

TOM SILVA: And you can make the front of the drawers angled with the stairs so that it could be a paneled wall, for example, and you don’t even notice it. Or it can be a flat wall with flat surfaces of the drawers so all you see are the little lines. And the drawers can be touch so when you hit the drawer, they open up.

Now, obviously, when it comes to storage, we think about putting things up on our walls. But not every wall is suitable for storing some of the things that we want to put up there, right?

TOM SILVA: No, absolutely not. But they have great units, shelf units, hooks and all those kinds of things for putting on walls. Like it gives you extra floor space if you get it up off of the floor. And that’s great if you think about garages, for example. Where do you put all the stuff in the garage?

TOM: Lifted up right out of the way.

TOM: The attic insulation is almost always thicker than the floor joist that we’re walking on.

TOM: So is it kind of a balance between maybe carving out some space for storage and then letting the insulation do its job in the rest of the attic space?

TOM SILVA: Well, it’s very important that you don’t compress the insulation. So that’s always a key factor but we’ll go back to garages for a minute. They actually have these electric lifts that you can put in your garage. And so you can push a button and out of the ceiling will drop this box that you can load up, push it and it goes back up and you have complete storage, out of the way, in the attic.

LESLIE: You have to have clear space below it, though, to accommodate it coming down.

TOM SILVA: Well, you have to – yeah, you don’t want it to come down onto the car. But that’s true: you do have to have space below.

TOM: And of course, the attic is generally not insulated, so you don’t have to worry about running into insulation conflicts.

TOM SILVA: Right. Exactly. Sometimes, people have rooms over the garage and those won’t work.

TOM: Now, just like the staircase, the alcoves in the corners, those dead spaces that are a result of the framing of a home. Good idea to take advantage of that?

TOM SILVA: Yeah, you can definitely take advantage of it. And sometimes, the alcoves are where there’s a chase or something.

TOM SILVA: You may be able to fill that chase, open it up, put some shelves and boxes and open shelves for displaying things into. We’ve actually taken walls where – an interior wall where you’ve cut the wall through the stud and you’ve exposed the back side of the plaster, where you put built-ins into there where you can display little ornaments or you can actually have a hidden cabinet door. Well, actually, for example, you take like a bathroom vanity mirror; they recess into the wall.

TOM SILVA: You can do that in other rooms but it doesn’t have to have a mirror on it; it can have a door on it.

LESLIE: That’s really smart. Because there are a lot of bays all around your house that you can fill up with a whole bunch of things.

TOM: Every interior wall that doesn’t have insulation, there’s no reason you can’t kind of go in on that wall.

TOM SILVA: Right. We’ve actually taken bedrooms where people want to hide things in their bedroom. We’ve actually cut sections of the floors out and made a hidden door in the floor. And you’ve got, in some cases, 8 or 10 inches of floor height that you can make a box to put in there. And you can hide your stuff in there and make it slide left and right …

LESLIE: What are your clients hiding, Tommy?

TOM: You don’t ask that question.

TOM SILVA: I don’t ask. It’s none of my business.

LESLIE: This is amazing.

You know, the other thing, I think, is that sort of open space above upper cabinetry in kitchens. That to me is very dated and begs for chachkies to just get covered in dust.

LESLIE: So why not go all the way up to the ceiling with an extra storage cabinet up there, as well?

TOM SILVA: Exactly. That’s why my pet peeve is make the cabinets tall. Make them go to the wall and that’s when you get into a custom cabinet or a semi-custom cabinet, where you could take a 30-inch cabinet and maybe put a 12- or an 18-inch cabinet on top of it, that you put the Thanksgiving cans up there and the cookware and stuff like that, the Christmas stuff that you’re not going to use all the time except when the family’s over. You break out those Christmas dishes and stuff but they’re not out of the way. You may need a little stepping stool to get up there but it makes a big difference.

TOM: I saw a cabinet design, not too long ago, where it was an existing home and they took a 12-inch wall cabinet, turned it on its side with the hinge on top, glass doors and that was across the entire top of the wall cabinets and it looked great.

TOM: It looked like it was always designed to be there and it was really an afterthought.

TOM SILVA: Right. And they make the hardware now that, actually, when you pull that door up, it stays up.

TOM SILVA: Yeah. And it’s – they actually make an electric one that you could push that button, it’ll open the door and it’ll come down.

TOM: Well, the storage surrounds you. You’ve just got to know where to look. And now we’ve got a few more places to squeeze in some more of our stuff.

TOM: Because you can never have too much stuff.

TOM: Tom Silva, the general contractor on TV’s This Old House, thanks so much for stopping by The Money Pit.