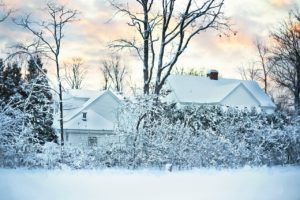 During the cold, dark days of winter, there’s nothing like curling up in front of the fireplace or gazing out at the freshly fallen snow. But even the most picturesque winter settings can pose winter hazards s that are both dangerous and expensive for homeowner.

Home repairs are inevitable, but the wintertime poses unique cold-related threats, such as ice storms, frozen pipes and even chimney fires.

On the spectrum of natural disasters, winter threats can be particularly expensive. The National Centers for Environmental Information ranks freezes and winter storms as the fourth and fifth costliest weather-related events, costing the country $3.4 billion and 2.9 billion per occurrence respectively.

A home insurance policy will cover many risks and disasters including those that happen more frequently in the wintertime. However, every time you file an insurance claim, there is a chance your insurance rates could go up. Home insurance policies can already be costly, with rates having risen nearly 50% in the last 10 years, so if you can avoid filing a new claim you may be able to save money over time.

How to prepare for most common winter hazards

There’s no way to predict what costly mishaps will affect you this winter, but taking precautions to reduce the following risks can pay off in spades.

You may be warm and toasty under a blanket, but frigid temperatures in your basement or attic can lead to frozen pipes. When water is unable to circulate freely through your pipes because of ice, the pipes can potentially burst. Gushing water from a cracked pipe can cause flooding, structural damage to your house and mold.

The costs associated with frozen pipes can be staggering. In fact, Philadelphia Insurance Companies estimated their average frozen pipe claim to be $27,000 with their highest claim reaching $1.7 million.

Keep the temperature in your house set to a minimum of 60 degrees. Pipes in parts of your house that are cold by nature such as basements or attics are more vulnerable so cover them with heating tape or insulation at the start of the cold season.

When temperatures are below freezing, keep cabinet doors open so the warm air inside your house can reach them. Also, let water faucets drip slowly, as flowing water in the pipes is less likely to freeze. If your pipes do freeze, shut the water off from the main valve and call a plumber at once.

Find out from your municipality how long you have to remove ice and snow. For example, in New York City, a homeowner has four hours to remove snow from their public sidewalk if the snow stopped between 7 a.m. and 4:49 p.m.

Plan in advance to make sure you have ice melt and a good shovel or you have someone lined up who will remove snow and ice from your sidewalk for you.

When snow and ice become a seasonal reality, salting your sidewalks may seem like a necessary evil.  Sure, it helps melt winter ice and snow, but the wrong kind can cause concrete surfaces to disintegrate.

To keep your walkways in great shape year-round, choose salt made from potassium chloride.  This type of salt will melt ice without damaging your sidewalk.

If you want to be extra-smart: buy potassium chloride before winter storms set in, and mix it with playground sand.  Keep a supply stored near each entrance to your home, where it’ll be within easy reach.

Ward off a winter disaster by trimming your trees — or hiring someone to do it — in order to get rid of dead branches. If your trees are near power lines, leave the work to a professional to avoid accidentally cutting access to your power or getting injured.

Your roof’s shape and slope can affect your risk; flat roofs and those with less of a slope are most vulnerable. Your roof may also be at risk of collapse if it’s sagging, leaks or makes creaking and popping sounds.

Before it even snows, it’s best to have your roof inspected by an independent professional home inspector to identify any structural issues or other problems like missing shingles. Also, make sure gutters and downspouts are free from leaves and other debris since they carry water well away from your roof.

If your roof starts sagging or making sounds under heavy snow, it’s time to take action. The last thing you want to do is climb up on your roof to remove the snow. Not only might you slip and fall, but your additional weight could be the final straw that causes your roof to come crashing down.

Instead, use a snow rake, a tool with an extended handle that lets you reach up to the roof to knock some of the snow away.

The cold weather makes winter the ideal time to use the fireplace. However, debris in your chimney, such as leaves or remains from a bird’s nest, can catch an ember and cause a chimney fire.

Even without a foreign object, the substances that are produced when wood burns, including smoke, vapor, gases and unburned wood particles, leave a residue in the chimney called creosote that can also lead to a chimney fire.

The best prevention is keeping your chimney clean. The Chimney Sweep Institute of America, an organization that raises awareness of the risk of chimney fires, recommends that you have a professional chimney sweep once a year.

Top Five Dangers to Your Home

The New Homeowner’s Guide to Preparing for Extreme Weather

How to Winterize Your Home Before Going Away

Eliminate Squeaks and Creaks, Learn How to Clean Bathroom Grout, and get Insider Tips on Protecting Against Cold Winter Damage

Creating a Hobby Room, Advantages and Disadvantages of Different Roofing Material, How to Prevent an Ice Dam and More