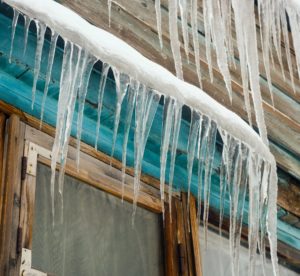 by The Hosts 3 Comments

LESLIE: Don from Pennsylvania is on the line with a situation where icicles form on siding. What’s going on?

DON: I had a strange thing happen on the backside of my house, which faces the northeast. It has vinyl siding on it. And I noticed, this past week, we had a lot of snow and wind. I have icicles running down my siding, only on that wall. And the water’s dripping out of the drain holes in the siding. This hasn’t happened. It’s been sided for three or four years and I hadn’t ever noticed that before. And it did go all the way across the full width of the wall, every foot or so. It wasn’t just in one location. It happened to go all the way across the wall 16, 18, 20 feet or so.

TOM: Now, do you have – also happen to have an ice dam on the roof above it? Like ice on the – are there icicles coming off the gutter? Do you see ice built up at the roof edge, Don?

TOM: I wonder if water is getting behind the siding causing situation where icicles form on siding. That’s why I asked that question.

DON: It was so cold it wasn’t doing the – when it melted at all or was warm enough to melt, it was while the weather was really cold that it formed.

DON: But I mean I would agree with you. It could have – it just that it had never happened in that way before.

TOM: Now, the water that’s coming out, it must be coming out through the siding drain holes and then icing once it hits the outside of it? Is that what you’re seeing?

TOM: OK. So the only way that seems to me to that it could be happening is if the water is getting behind it. And an ice dam would cause a situation where icicles form on siding.

Now, for those that are listening and aren’t familiar with ice dams, it’s probably a good thing that you’re not. Because what happens is if you live in certain climates and you get a heavy snow, it starts to melt then at the upper part of your roof, which is usually warmer because a lot of escaping heat from the house gets there. As that snow starts to melt and the water runs down, it hits the part of your roof that’s overhanging the exterior wall. And since it’s overhanging the wall and not your house, it’s colder and hence, it tends to freeze there.

And once it freezes, you get the effect of a dam. The water keeps hitting that dam and it can’t get through it, so it backs up under the shingles and then it can leak down through the sheathing. And it can either leak into your house or it can leak into the exterior wall and perhaps show up as it is in your house, Don.

Now, when’s the last time you did your roof?

DON: It’s a metal roof and it’s no more than four years old.

TOM: Well, if it’s a metal roof, you shouldn’t be having water back up under it unless it’s backing up to the seams. So, I guess at this point, I would wait for the winter to pass. And then I would take a careful look at the seaming around that area and see if there’s any gaps where water could be forced up under there. Because it would seem to me that the most logical way the water is getting into the siding is by being pressed up there through an ice dam causing the situation where icicles form on siding.

DON: OK. Would you recommend – would you feel that these ice tapes with – you put in your gutters.

DON: If I get the chance, in a thaw, to add that, do you think that might help?

TOM: It may. The real solution here is ice-and-water shield. And what we don’t know is whether or not that was installed underneath that metal roof. It certainly should have been. It’s a fairly minor addition, at that point, when you’re putting a metal roof on.

But ice-and-water shield is a membrane that goes from the roof edge, up about 3 feet. And frankly, I generally recommend putting it on the entire roof because not only does it stop ice dams at the roof edge but if your roof was ever taken off in a storm, the water can’t get through the ice-and-water shield, especially if you live in a coastal climate. That’s really, really important. Minor expense it adds to the roof for all the protection that it gives. So, ice-and-water shield – in your case, though – would require you to take – disassemble the metal roof along the roof edge, which is a big project.

So, I don’t like to see you necessarily put this electric heat-tape appliance that melts the ice into the gutters, especially if you’ve had it all these years and it only happened this once. As you know, it’s a factor of the weather, so it can change. The situation where icicles form on siding may never happen again or it could happen every year or it could happen two or three times a winter. So I don’t think I would take any major action just yet, OK?

How to Prevent Icicles

Why Do Ice Dams Form On My Insulated Roof?