You are here: Home / How to Hire a General Contractor

LESLIE: When it comes to major remodeling projects, one of the first, super-important decisions that you need to make is to decide if you can really do it yourself or if you should hire a general contractor to help. 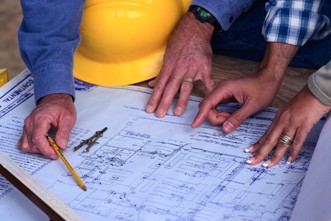 TOM: Definitely. But if you do decide to hire a pro, how do you find the right one for your project? Joining us now are two experts who know a lot about that topic. On the phone is Angie Hicks – the founder of Angie’s List, a website devoted to helping consumers find the best professionals for their projects and service needs – and Tom Silva, the general contractor on TV’s This Old House.

TOM: So he’s your expert, as the homeowner, to make sure the entire project goes smoothly from soup to nuts.

LESLIE: And you, really, as a homeowner, might need that if you don’t understand the steps in the process and you’re trying to bring in everybody individually.

TOM SILVA: People do not understand how much a pain in the neck it can be to be a general contractor when they say, “Oh, I can do this,” and they try to do it. They realize real quick it’s not easy.

LESLIE: So, Angie, when you’re considering the scope of most projects where you really do need to involve a general contractor, you’ve got to have a high degree of trust and confidence in that contractor that you hire. So, what’s the best way to screen for the right pro?

ANGIE: Well, when you’re looking for a general contractor, you’re exactly right. A lot of times, these projects are high dollar-value projects. You might be spending thousands of dollars, so you want to be sure you’re getting three estimates from contractors. And comparing general contractors can be a little tricky because each of them might recommend something different. So you want to try and get as – apples-to-apples comparison.

And then, obviously, checking references, doing an in-person interview with the contractor. Because let’s face it, when it comes to hiring a contractor, you’re potentially going to be having them in your house for weeks on end. So you want to be sure that you’re going to have a good working rapport.

TOM: And what are the most common mistakes consumers make when hiring general contractors?

ANGIE: I think the number-one complaint I often hear is consumers are not getting information documented. You know, it may seem like a lot of effort to get this project outlined in complete detail in a contract but it’s very, very important. How are change orders going to occur? What happens if I change your mind on something? What if the project gets delayed? How are payment terms going to be handled? You want to outline as much of that out in detail as possible so that it can potentially avoid problems down the road.

Additionally, interacting with your contractor every day they’re on the job is really important because a project like of this magnitude, if you’re not communicating regularly, things can come up. And if they’re not addressed right away, they can lead to a big problem down the road.

TOM: Good point. Angie, what are some of the warning signs of a bad contractor perhaps you should watch out for?

ANGIE: Well, when you’re working with a contractor, you want a very professional contractor. So, obviously, they should have their license, they should be willing and able to give you their insurance information that you can check, obviously give you references to check. I oftentimes tell people, “Don’t forget about your gut instinct.” You’re inviting people to be in your house. You want to make sure you’re going to have a comfortable working relationship. And so if your gut’s telling you it’s not the right match, it may not be the right match.

TOM: Now, Tom, you’re a guy that probably has been in this scenario many times in the past: you’re being interviewed by a potential client. What are the questions that you think consumers really should be asking to make sure that they get a guy that really is going to be able to handle their project?

TOM SILVA: Well, I think the homeowners should find out if the person that they’re hiring does the kind of work that they want done. In other words, you’re not going to hire a new-house builder to renovate an old home. He may be looking for work but there are special steps that need to be taken when you’re renovating an old house. And you have to make sure you know the problems that are going to come up and how to solve the problems.

TOM: So you really have to look for a specialist in your area.

TOM SILVA: In your area, whether or not you put an addition on, a bathroom, a kitchen or building a new house.

LESLIE: And since these projects are usually on the large scale that you would involve a general contractor in, is the first step bringing in an architect, having your plans made, knowing exactly what the process is and then hiring that pro?

TOM SILVA: Yeah. You want to have as much done as possible before the work gets done. You need to know what kind of flooring you’re going to use to what kind of knobs are going to be used on the doors, to whether or not you want a laminate cabinet to another cabinet. You don’t want to be making decisions on the fly and slow the process down.

You know, the contractor should then ask the homeowner, “Do you have all of that?” And then the other question that should be asked by the homeowner is: “Have you ever worked with this architect before? Have there been any problems?” If you have, maybe they don’t want to work together. Maybe they aren’t a good match. You don’t want to have arguing amongst the team during the process because it can get pretty ugly that way.

TOM SILVA: Absolutely. You want to make sure – you’ve got to remember one thing: the home is the biggest investment you’re probably going to make. You want to be smart in who you hire to do the job.

TOM: Now, there’s a lot to think about. Angie, you’ve got an entire section of your website devoted to hiring contractors. Does it walk us through the entire process?

ANGIE: We sure do. The resource page is AngiesList.com/Contractor. And on that page, you can see all kinds of advice about checking references, hiring a contractor, writing a contract. Just a lot of the tools necessary in order to get the project started on the right foot.

TOM: Tom, with a project like this, you’re going to be interviewing a lot of general contractors, what kinds of things should you ask from them?

TOM SILVA: Well, I guess the first thing you want to ask is: are they qualified to do the job? In other words, can they handle that type of project that you’re doing?

TOM SILVA: You also want to make sure that you get references from the contractor, jobs that they have done that are similar to yours. And what most people do is they take four or five, six, seven, well, however many references and they say, “Oh, well, he’s got all these references.” Did you talk to any of the people that had the work done? Was the job done on time? Did it come in on budget? If there were issues, were they taken care of?

And also, one other thing that I would always say to do is find out one of the local jobs that they’re working on and go visit the site. See how neat, how clean it is. Find out the attitude of the people who’s working on the job because they’re going to be in your house for quite a while.

TOM: Great advice. Tom Silva, the general contractor on TV’s This Old House, thanks so much for stopping by The Money Pit.

TOM: And Angie Hicks – the founder of Angie’s List, a website that helps you locate great pros to help with your projects – thank you.

TOM: And Ask This Old House is brought to you by Angie’s List, reviews you can trust.

Finding the Best Contractor for Your Home Improvements

Hiring a Contractor? Here’s What to AskHow to Select a Spray Foam Insulation Contractor

How to Hire a General Contractor, Molding Made Easy, Life-Saving Tips for Your air Conditioner, and more