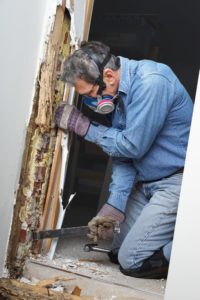 Buying or Selling a Home Pests & WildlifePodcasts Your Calls, Our Answers Podcast
FacebookTweetPinLinkedInEmail

LESLIE: Heather in Rhode Island is dealing with termites found when purchasing home. Tell us what’s going on.

HEATHER: My fiancé and I – just over in the process of hopefully purchasing a home.

HEATHER: Thank you so much. We’re very excited. But we had our inspection on Friday, which was a bit of a roller coaster.

HEATHER: It actually – it wasn’t bad. There were just some very minor things. But right as the inspector was about to leave – she’s walking out the garage – and he sees on the wall, just about a foot up, a termite tunnel.

HEATHER: And so, we – you know, when we talk about this with different people, some people are saying, “Oh, that’s no big deal.” Others are saying, “Oh, man, you’ve got to have that looked into.” So we’re actually – our realtor – we were waiting for some other tests to come back: the radon and all that. So he’s going to now get in touch with our – with the buyer’s realtor to talk a little bit about the termite situation. But we just don’t know if we should be really concerned about it or how much we should push back on the homeowner.

TOM: OK. So I can help you with that. I spent 20 years as a professional home inspector doing that exact job and have surprised many a couple, like yourself, over the years with things that we’ve found. I actually found termites or evidence of termites in about one out of three homes that I inspected, because it was very common where I lived and where I worked.

Now, let me ask you about this house. Is it a house on a basement or a crawlspace or is it a slab?

TOM: OK. And is the basement finished? Is the ceiling finished? Can you see all of the floor joists?

HEATHER: No, it’s not finished.

TOM: Not finished. OK, good. Well, look, you need to have a very thorough termite inspection – a wood-destroying insect inspection – done, first off, where an inspector is going to examine the floor framing where it is along the outside wall. Usually when termites found when purchasing home, they’ll tap it with a probe or a long, heavy screwdriver to see if any damage has gotten into the wood. It’s good that the basement is open and exposed like that, because termites live in the soil and they come to the wood to feed. Then they go back to the soil, basically, for moisture. So, by checking that wood, that’s the most common place.

Coming up in the garage, it’s not unusual either. And it sounds like they come up along the outside of that foundation – of the interior foundation wall. That’s fine. But you also need to sort of be aware that it could go into the wall if it’s behind drywall.

Is the garage finished on that side or can you see right up into the framing?

TOM: OK. So then they’re – that gets a little trickier to find. But a good inspector knows what to look for to discover if termites found when purchasing home. One little trick of the trade, by the way, is if you take a high-powered flashlight and you lay it flat on the wall, you will see every little defect in the drywall surface itself. And if there’s termite tunnels in there, you can almost see the tunnels because they’ll be laying right below the paint. The termites are very tricky. If you think about drywall, it’s plaster, then paper, then paint. Well, they’ll leave the plaster, leave the paint but eat the paper. So, you can – I kind of see it that way.

And by the way, it’s traditional for the seller to pay for termite treatment and termite-damage repair. Because mortgage companies will generally not loan on a home that doesn’t have a clear termite certification. So, I think this falls all on the seller’s lap but you need to be sure that a very thorough inspection was done when dealing with termites found when purchasing home.

Now, in terms of the treatment, that’s changed a lot, too, over the last couple of decades. Now, the treatment options that they use are treatments that are undetectable termiticides. So they’re chemicals that are applied – insecticides that are applied – to the soil and they’re put below the slab in the garage. And they’re put in the walls of the house. And as the termites pass through these cavities, that insecticide gets on them and they take it back to their nest. And then it kind of wipes out the entire nest. It’s kind of like germ warfare for termites. It’s really effective.

The brand that I would recommend is called Termidor – T-e-r-m-i-d-o-r. It’s made by BASF. And it’s a fantastic product if termites found when purchasing home. And if you have it done professionally, I think it can be installed safely and give you years of protection against further termite infestations.

HEATHER: Awesome. That’s great news. I’m glad to – thanks for sharing that usually that’s on the seller to hopefully pay.

HEATHER: That was part of our concern.

TOM: Yep. Good. Alright. Well, good luck with that and congratulations again. When are you guys getting married?

HEATHER: Thanks so much. Next May.

TOM: Good luck and call us back when it’s time to build a nursery.

HEATHER: Will do. Thanks a lot.

Buying or Selling a Home Pests & WildlifePodcasts Your Calls, Our Answers Podcast

How to Repair Termite Damage

Eliminate Evidence of Termites on a Fence