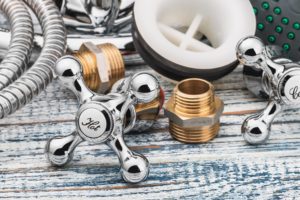 LESLIE: Heidi in Rhode Island is on the line with a plumbing question. Tell us what’s going on.

HEIDI: I bought this house two years ago.

LESLIE: Tom and I both live in a 100-year-old house, so we know the troubles that come with them.

HEIDI: Yeah. But I loved it because it’s in this really cute, waterfront community just outside of Providence. And when I bought it, it was originally – it’s a three – two-and-a-half-story Victorian but the previous owners or maybe the owners before that decided to break it down into three units.

HEIDI: So, I’ve undertaken the huge task of renovating it from – it’s not – so the second unit, which is finished now, obviously I could only get to certain plumbing. Some parts based off of what I gutted from the first floor I could get to. So not all the plumbing was replaced but majority of it.

Nonetheless, the shower – and I’ve been in the renovated unit for over a year now but never had this problem all last winter. But this winter, maybe a handful of times so far. And ironically enough, it’s – as of right now, I can’t get the shower on today. The water won’t come out.

TOM: Now, Heidi, has the plumbing feeding this shower been replaced?

HEIDI: No. So the valve in the back – it’s a diverter, so it goes from hot to cold.

HEIDI: It hasn’t been replaced.

TOM: The plumbing is – you mentioned you did a lot of plumbing but this plumbing in the wall that feeds the shower was never replaced?

HEIDI: No. Just a lot of the copper. So that – changed that out to PVC but this one shower …

TOM: Is still the original? What kind of plumbing is it? Is it steel?

HEIDI: No. Some of it was copper. And so now, from the second floor down to the basement is – has all been replaced with PEX.

TOM: OK. And that’s smart to do. OK, so look, we need to figure out, first of all, is the problem because the water is not getting to the showerhead? And if that’s the case, then it’s going to be somewhere south of the bathroom, obviously, if this is going on. Could be a bad valve.

HEIDI: It’s not just the shower. There’s no water coming out of the spout either. I turn it on. It’s as if …

HEIDI: Yeah. And it’s only happened a handful of times this winter.

HEIDI: You know, that’s really funny you ask that because the first – so we’ll say the first four times this happened, sink, toilet, fine. Today – this morning – sink, toilet, not fine.

HEIDI: But then I came home today and I put a space heater in the basement – just this – I wondered if maybe that was the problem. So it was too cold last night. And I came home and the sink and the toilet seemed to be fine.

TOM: So is it cold enough for the water – the pipes – to freeze?

HEIDI: That’s what I thought. But how come it didn’t happen last winter? And then the second thing that made we doubt that was I know when we put the chase in for the second floor, before we closed up the walls downstairs, we definitely insulated.

I think, at this point, you’re going to need to get a plumber to diagnose it further. Because it’s one of those causes and then you can kind of move on from there. It sounds like you pretty much have a plumber on retainer there, with all the work that you’ve done. But I think it’s time to tackle this bathroom.

And by the way, replacing all those lines with PEX is a really smart thing to do. And in case it is partly because of pipes that are freezing in the wall, PEX is so darn flexible, you have a lot of options as to where you can run that. I used to have a kitchen sink that would occasionally freeze and that’s because the supply pipe ran up the exterior wall. So we ran the PEX up through the kitchen cabinet and it hasn’t frozen since. So, a lot of options with that.

HEIDI: I really appreciate and listen to your show often. Thanks.

How To Identify and Repair a Plumbing Leak in Vacant House