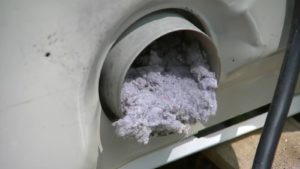 LESLIE: Mike in Minnesota is dealing with tumble-lint, if you’d like to call it that. Lint blowing out a dryer vent.

MIKE: So I’ve got a dryer vent that directly vents through the exterior wall that it sits against, so there’s not much ductwork involved. My problem is that the vent sits 12 inches up from our deck surface, right in the middle, and it just makes an awful mess. So I’d really like to put in some type of maybe secondary capture system or maybe even reroute it on the exterior of the house.

I should also let you know that I have three teenage daughters and a wife, so doing less laundry doesn’t – isn’t really a popular solution at my house.

TOM: One solution could be just a clothesline, you know? Did you ever think of that?

MIKE: I’ll offer that one up to my wife, too, and see how that goes.

TOM: There you go. See how far that gets us.

Well, look, the good news is that having a dryer vent that’s so close to an exterior wall like that means that your clothes dry as efficiently as possible. Because if you try to reroute this dryer anywhere else but directly out, it’s going to take a lot longer for those clothes to dry. Plus, you have the added hassle of needing to maintain the dryer exhaust duct because it will continually build up with lint and have to be cleaned. So it’s clearly a trade-off.

I don’t think that anything that traps lint is going to be a good thing. It can cause a fire, actually. I mean the fact that it’s venting out is what it’s supposed to do.

MIKE: Well, that’s what I expected, too, and it’s a new dryer. And certainly, it’s capturing a lot, too.

TOM: Well, if you did rerun it, where would you go?

MIKE: Well, I thought about putting it just below the deck, which is about 12 inches down. But I have a basement window there and it would just make a mess of the window. The only other option I’d have is to run it along, basically, the floor of the deck. Maybe it would probably take about 8 feet or so before I got away from the deck. But that would be a sharp right turn.

TOM: Well, here’s what I would think about. I would think about how many turns you need to make, starting at the machine, to get that to happen. So if you take – if you come off the machine and you take one elbow down and then you go into the floor, you take another elbow out, you’re essentially making a U-turn. And then that warm, moist air has to travel all that distance to get out. So, is it possible? Yeah. It’s not going to be as efficient, so that’s your trade-off.

And by the way, keep in mind that with most dryers, you can actually move the dryer vent. For example, I have a dryer that I’m reconfiguring right now that has a dryer exhaust duct out the back. But I noticed that the side of the dryer has had punch-outs – holes – for it. And so I just looked up online and the installation instructions showed me how to rerun the duct coming out the side of the machine so that I could vent it quicker to an exterior wall than having to go down through a floor.

TOM: So consider that you may be able to come out of the dryer in a different direction.

TOM: Good luck with that project. Thanks so much for calling us at 888-MONEY-PIT

Beware of Product Defects that Could Cause Appliance Fires

How to Clean a Dryer Vent

How to Vent a Dryer Properly