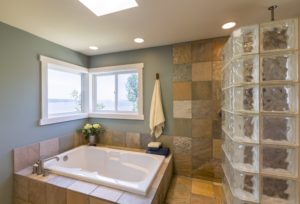 Bathroom vent fans don’t just keep your mirrors clear and reduce odor. They remove moisture that can lead to wall damage and mold. Replacing a bathroom vent fan/light combo is an intermediate-level project you can do your own in just two to four hours.

The cost of this task depends on the type of bathroom vent fan you choose. The quieter the fan, the pricier it will be. We recommend selecting a fan with the lowest sone rating you can afford. Also, check the CFM – cubic foot per minute. This affects how much air the fan moves. An 80-square foot bathroom will need a fan rated at 80 CFM. If your bathroom has a tall ceiling, select a fan with a CFM 10 or 20 percent higher. Here’s what you’ll need to take on this project:

When taking on this DIY task, be sure to equip yourself with the proper safety gear.

Disconnect the wires. Carefully unfold the wires. Use masking tape to indicate which wires go to the light and which go to the fan. You can also use a smart phone to take a photo of the connections. After marking the wires or taking a photo, remove the wire nuts.

Detach the housing from the ceiling. The bathroom vent fan housing is typically attached to a ceiling joist. If you find any fasteners, back them out. If the housing doesn’t release, run a mini-hacksaw along each side until you hit screws or sheet metal flanges. Cut through these to release the housing.

Detach the duct and wires. Push the housing up and to the side to reveal the duct. Remove the clamp or tape that secures the duct to the housing. Straighten the wires and loosen the strain relief clamp, if necessary. Carefully guide the wires out of the housing and lower it out of the hole.

Enlarge the hole. Tuck one corner of the new vent fan housing into the hole and against the joist. Mark around the housing, score the drywall with a utility knife and enlarge the opening with a drywall saw. Push the new housing into the ceiling and slide it to one side.

Attach the cable. Strip about three-fourths of an inch of insulation from the wires. Attach a cable clamp roughly four inches from the stripped ends. Screw on the lock ring and tighten it.

Attach the duct. Slide the housing to the other side and connect the duct with duct sealing tape or a duct clamp. The new fan may need a duct adaptor if its outlet doesn’t match the duct.

Connect the wires. Hold the bare copper wire ends side-by-side and twist on the wire nut clockwise. Connect the hot and neutral wires the same way, confirming each connection according to the manufacturer instructions. When complete, attach the wiring cover.

Fasten the housing. Slide the housing into the hole, positioning it so its edge is flush with the ceiling. Fasten the housing to the ceiling joists with a drill/driver, using one and one-half inch general purpose screws. For installations with attic access, use the hanger bars provided with your fixture.

Your installation is complete!

For more information, check out these related articles:

How To Replace A Light Fixture With A Ceiling Fan | Video

How To Replace A Garbage Disposal | Video

Install Exhaust Fan and Light Combo in the Bathroom