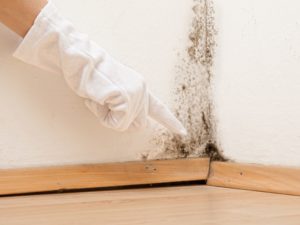 LESLIE: Well, the most humid place in your home is probably your bathroom. And while there’s nothing like a good, hot, steamy shower, you need to know how to control the moisture in your bath.

TOM: That’s right. Too much moisture can cause paint to peel and mold to grow but there are ways to prevent it. Here to tell us how is the plumbing and heating expert from TV’s This Old House, Richard Trethewey.
Welcome, Richard.

TOM: Now, we often think of mold being a basement problem but mold is actually more common in the bathroom, isn’t it?

RICHARD: Well, anywhere you combine moisture, air and some food source – drywall or a paper – you’re going to get a mold problem. And the bathroom is a perfect candidate for that.

TOM: And one of the best ways to prevent that is to have good bath ventilation. What are some of the options to choose from?

RICHARD: Well, I think there’s really three. The most common one that we all know is that bath fan. Sometimes, it has an integra (ph) light in it and it sits right in the center of the bathroom. And it turns it on and you exhaust it to outside.

RICHARD: They also make a remote fan now, which you could put a – as the name suggests, you could put a fan up in an attic and it could be the fan for more than one bathroom. And that can be quieter and it can be energy-saving.

TOM: So it’s ducted to the individual bathrooms then but really one motor can basically run everything.

RICHARD: That’s right. And the motor’s efficient and quiet.

TOM: Alright. Now, how does that work?

RICHARD: Well, just imagine that all the places where you could get air that was both highly humid and filled with odor – that would be bathrooms and kitchens – that leaves through an exhaust duct through this box.

RICHARD: And as that air leaves, it will pass through this energy-recovery ventilator while at the same time, fresh air from outside will pass in the opposite direction across that stale, heated air.

Now, the air doesn’t touch it directly but the heat is transferred to that new air that’s coming in.

TOM: Ah, so we actually take some of that heat that we paid to create – in that smelly, damp, moist air – and we transfer it through this sort of heat-exchange mechanism to the fresh air coming in.

RICHARD: Yeah, we get the best of both worlds. We get preheated, fresh air into the building while we’re exhausting the stale air out. And with an energy-recovery ventilator, we also can transfer humidity, so we’re not going to be bringing in dry, dry air in the winter. We’ll get some of the humidity that was in the house to stay in the house.

TOM: Now, let’s talk about the switching mechanisms for these, because I think that one of the easiest ways to try to keep mold down in your bathroom and reduce that humidity is to make sure not only that you have the ventilator of your choice but that it runs long enough to do the job. Timers can play an important part there, couldn’t they?

RICHARD: Right. You need enough fresh air in a building and as the building gets tighter, as fuel goes up, people are insulating more and doing all sorts of things to keep the heat and the air in. So putting a timer for 20 or 25 minutes of every hour, to just bring some fresh air in, is actually good to keep ahead of that mold issue.

TOM: And probably the more that you can do this with occupancy sensors and things like that – where you don’t have to depend on your kid, for example, to set a timer when they step out of the shower – makes the most sense.

TOM: Because it’s more of a chance it’s going to actually get used.

RICHARD: I think that’s part of the future, Tom, is this remote-proximity sensor. I think in a bathroom, it should bring on the fan to bring fresh air in, it should bring on a recirc line to bring hot water to the hot-water faucet. And then more and more of that’s being done now with some of these cool home-automation systems.

TOM: Now, let’s talk about venting. Once you take that humid air out of the bathroom, it’s real important that you don’t put it somewhere else where it can do damage, like the attic.

RICHARD: Right. We’ve seen on Ask This Old House all these years, so many times the attic is so filled with mold because the vent pipe has come off of the exhaust fan. You’ve just been dumping highly humid air into this wooden rafter opening.

TOM: Which is cold and condenses and it’s wet all the time.

TOM: Not to mention the fact that that insulation getting wet really doesn’t do its job very well, either.

RICHARD: That’s right. We often see that flexible ducting that’s used on these bath fans also can – if it’s not supported, can provide sag points where moisture will sit in it and that really becomes a mold place.

TOM: Interesting. So it becomes almost a trap, just a plumbing trap, but it’s collecting condensation.

TOM: Now, what are some other things that you can do to reduce mold in the bathroom? Specifically, let’s talk about grout or caulk, for example. I mean that’s really – that’s that one dirty area of the house that you wish you’d get cleaned but sometimes you just can’t.

RICHARD: Well, they have mildew-resistant caulking and that can do a good job. It’s not going to stop every bit of mildew if you’ve got high, high humidity levels. You can use paperless, mold-resistant drywall in the bathroom. You’ve got to really get rid of that food source, which is any paper or cellulose, where mold wants to grow.

TOM: And always make sure you have a paint that has a mildew-resistant additive to it, as well?

TOM: Yeah. So, essentially, if we want to stop mold growth in our bathroom, we need to attack it on all fronts: we need to make sure we keep the humidity down; we ventilate all that warm, moist air; and then any other opportunity we have to choose something that’s mold-resistant, then definitely take that step.

RICHARD: Yeah. Water is the active ingredient that you’ve got to stay ahead of, most importantly, Tom.

TOM: Unfortunately, we need a lot of that in the bathroom.

TOM: Richard Trethewey, the plumbing and heating contractor from TV’s This Old House, great advice, as always. Thanks for stopping by.

LESLIE: Catch the current season of This Old House and Ask This Old House on PBS. For local listings and a step-by-step video on this project and others, visit ThisOldHouse.com.

Still ahead, do you have unsightly moss and mildew beginning to take over your home’s exterior? You know, there’s no such thing as attractive moss; it’s all unsightly. But we’ve got a quick and easy way to help you get rid of it, once and for all, after this.

Preventing Mold from Spreading in Your Home

Bathroom Remodel: How to Start Planning

How to Ventilate a Bathroom

How to Use a Bathroom Fan