Tom Kraeutler: Welcome to this edition of the Money Pit’s Top Products podcast coming to you from the 2014 National Hardware Show in Las Vegas, Nevada. I am Tom Kraeutler and I’ll tell ya, we are all for anything that will make chores around the house easier.

Hyde Tools is here at the National Hardware Show with the introduction of several new products, including one that can turn your garden hose into a cleaning tool. Here to tell us about those and more is Corey Talbot from Hyde Tools. 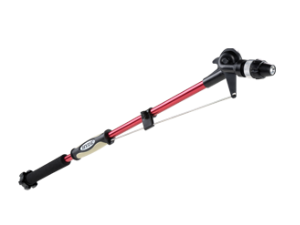 Tom Kraeutler: Tell me about this pivot product that you guys have come up with.

Corey Talbot: Well, about six years ago we came out with a line of products that were for the pressure washer ones and we’ve got some intellectual property and we’ve got some design and feature benefits that we felt would go well with the garden tool arena because there’s a lot more people, obviously, that have that, and people feel more comfortable with that type of product than power tools sometimes. A pressure washer is sometimes too loud or they don’t want to use a gas waterer. They don’t want to be dragging around a cord.

Corey Talbot: And maintenance, and it really is something that people just don’t feel comfortable with. What we felt is we’ve got these great tools, we’ve got these great features, we’ve got this pivoting nozzle that allows you to reach high or not have to stoop down, get underneath things without actually having to get down on the ground and do those things, get on top, or get inside of gutters, all those things. It works … That slide mechanism here.

Corey Talbot: We added to that because that was a great feature, but …

Tom Kraeutler: The handle slides up and down and actually angles the nozzle.

Corey Talbot: Correct and pivots that nozzle so that you can direct the stream wherever you need it to be.

Tom Kraeutler: I would imagine that would be handy, for example, cleaning a gutter when you can reach up with the hose and angle the nozzle down to sweep out the leaves.

Corey Talbot: That’s it. That’s one of the prime areas that we find that people really like to use it. What we did find was that … That was the first generation we had last year. When you’re cleaning something, let’s take a car, when you clean a car you’ve got to have your bucket, and you’ve got to have your brush, and you might have a shammy, you might have a spindle brush or something to do inside of the wheels. You’re constantly picking things up, constantly putting things down. This tool allows you to do all those things without ever having to put the tool down because we’ve included all those on the product. We’ve actually come up with a brush attachment that swings around into the place where you need it and allows you to pivot that brush.

Tom Kraeutler: Now you can apply the water just where you want it and the brush is built into the tool as well?

Corey Talbot: That’s right. You don’t have to pick up your hose, spray the car down or the siding of the house, and then go ahead and put that down, pick up your brush, and scrub things off. It’s all in there.

Tom Kraeutler: Truly all-in-one. What about the soap or the detergent?

Corey Talbot: The soap/detergent, that’s something that we don’t actually offer but anybody’s will work. The reason it will is because we’ve come up with a ratio adjustment on the bottle.

Tom Kraeutler: So you have a reservoir in the tool which you could add the soap solution.

Tom Kraeutler: And then you can adjust the flow of that soap into the water stream.

Corey Talbot: We’re just launching this at the show so it’s available only online at this point.

Tom Kraeutler: Well, that’s terrific. We’re talking to Corey Talbot from Hyde Tools. Another tool that you came out with, and I can really appreciate, is the dust free sponge sander. Having just done a room full of drywall myself.

Corey Talbot : I wish I knew. I would’ve sent you one.

Tom Kraeutler: I’ll tell you, we had to, of course, drop cloth everything, cover all the areas we didn’t want the dust into and no matter what terrific job you do trying to mask those areas off the dust is insidious, it gets everywhere. This is a sander that hooks right up to a wet/dry vac?

Corey Talbot: A wet/dry vac. What you’re able to do with it is it just uses regular sponges that you can find out there. It comes with two sponges.

Tom Kraeutler: In fact it looks exactly like the sponges I used.

Corey Talbot: Exactly. It’s the exact same size as that so you don’t have to buy the Hyde Tools sponges. You go to the store and it’s easy to get a different refill if you need it. You can go and get anybody else’s sponge. They all offer this size. It allows you to do in corners because we’ve got one that’s a corner piece. It fits into a little carrying piece with a hose attachment that has an adapter for the three different size hoses that are most common when it comes to wet/dry vacuums.

Tom Kraeutler: Essentially, instead of the traditional wet/dry vacuum nozzle you’ve designed a holder for the sanding pad that allows you to essentially sand with the hose in hand and capture all that dust that’s coming off of the block. What we’re talking about here is the sanding sponges that are available from companies like 3M.

Corey Talbot: Correct. It sucks that all up around the cavity and you’re going to get ninety-five to ninety-eight percent of all that dust which is a huge difference.

Tom Kraeutler: The next room, I’m in!

Corey Talbot: You’re right. It is one of the things that most people do not want to do.

Tom Kraeutler: Yeah, I love home improvement. It’s one of those things that I don’t really look forward to but it’s a necessary evil.

Corey Talbot: Most people don’t and the reason for it is because it’s so messy and a lot of times …

Tom Kraeutler: Yeah, and I’m not a good spackler. I use way too much and have to sand way too much.

Corey Talbot: We’re not all pros. Most pros, they don’t even have to sand. The rest of us, we get a hump on the wall.

Tom Kraeutler: We don’t do it everyday.

Corey Talbot: Yes you can.

Tom Kraeutler: Terrific. Corey Talbot, thanks so much for being a part of the Money Pit’s Top Products podcast.

Corey Talbot: Thanks for having me.