Tom Kraeutler:    This is the Money Pit Top Products podcast, coming to you from the 2015 International Hardware Show.  I’m Tom Kraeutler. 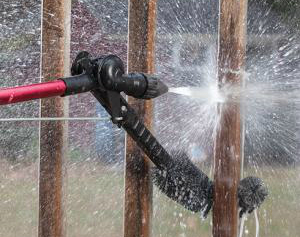 Tom Kraeutler:    With us now is Corey Talbot. He’s the Vice President of marketing and product development for Hyde Tools. Welcome, Corey.

Tom Kraeutler:    You guys have developed a wide variety of tools that make jobs easier around the house, one of which that I absolutely love, is the new PivotPro. Let’s describe that for our audience.

Corey Talbot:    It is a product that actually goes onto your garden hose, and it is like a garden wand. It’s something that everybody has at their house already, that they can attach to. It’s really a cleaning tool more than it is a watering tool. What we’ve done is, we’ve taken the item and made it so it’s something you could put down to the ground level, or you can use it on your patio. You can use it on your deck, you can use it on the siding of the house. It’s got different accessories that we’ve been able to put onto that that actually swivel into place, that allow you to clean those different surfaces.

Corey Talbot:    Correct. There’s different accessories for each of those. We’ve got a microfiber pad for the auto, we’ve got something that’s more of a bristle, a stiff bristle that you would use.

Leslie Segrete:    Like a stick bristle brush for deck surface or something like that, and you even have a detergent area there.

Corey Talbot:    Sixteen-ounce detergent, and this is something new for us. You can change the ratio, which is something that we heard on the last model, that we didn’t have.

Tom Kraeutler:    If you have a concentrate you could actually adjust the mix? 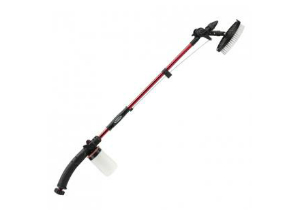 Corey Talbot:    That’s it. There are different ones for different types. If it’s a garden person that wants to do something with putting fertilizer on their flowers, or something like that, it’s going to be a different type of ratio than you have for cleaning.

Leslie Segrete:    I imagine, with this you’ve got certain accessories that come as a starter kit.

Corey Talbot:    That’s right. We have five kits, in total. There’s one for boat and auto, there’s one that is for doing outdoor cleaning, and then there’s one that’s just for gardening. They way you move this is, you just push the button in …

Tom Kraeutler:    It indexes and changes. What does this do to the standard pressure that comes out of the garden hose? Does it step it up?

Corey Talbot:    It focuses it, that’s correct. On the garden wand, we actually have a nozzle, and it has three different settings on it, three different patterns. Those are important, obviously, you’re gardening. If you’re cleaning something, you really want to make sure you’re just getting a good mix with soap, so that you’re getting it blown on the area that you’re trying to clean.

Leslie Segrete:    You’re getting it focused on the spot you’re trying to clean. I love the scrub brushes there, attached right at the end, because it takes away a step. You don’t have to be grabbing something different, just keep going at the same time. That’s interesting that you guys, I feel, not to say that you’re step-skippers, because you certainly pay attention to every single step as far as prep and things go when it comes to a project. That brings us to wall prep and drywall. You’ve really taken a big step when it comes to taping the joints on drywall. Talk a little bit about your Wet and Stick tape. 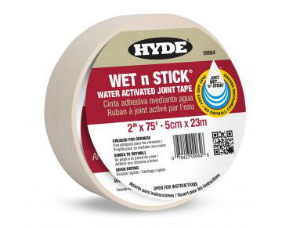 Corey Talbot:    We came up with this because nobody likes dry-walling, except for professional dry-wallers.

Leslie Segrete:    I’m not even sure they like it so much-

Tom Kraeutler:    They probably don’t like it so much, either.

Corey Talbot:    They probably don’t. The biggest thing is, there’s a mess, and nobody feels like they can do the job. It’s something that nobody feels very comfortable at, so we tried to change that a little bit by taking the first step, like you were saying, of having to put a bed coat of mud down into the joint; you no longer have to do that. This is water-activated tape. You put it in water, you stick it on the wall, you’ve got a little time to put it where you want it to be …

Corey Talbot:    Very similar to wallpaper. You come back in an hour, it’s dry, you put your next coat on. It really saves an entire day of production.

Tom Kraeutler:    That’s terrific. We’ve often recommended mesh tape, the fiberglass mesh tape, for the same reason, that you didn’t have to be very skilled in applying the drywall tape, the standard paper tape. This is a great alternative to that, because sometimes the mesh tape doesn’t stick.

Corey Talbot:    It doesn’t, and it’s got its place; it definitely is a good product.

Leslie Segrete:    I like it for repairs and things, but if I’m dry-walling a straight room, just in its stud form there, I want to use a paper tape. I like that you have it perforated, or creased in the middle.

Tom Kraeutler:    Consumers have questions on how these products work. Do you have step-by-step instructions, videos, that sort of things on your website?

Corey Talbot:    We do. It’s actually on the website. Any time somebody buys one of these packages, there’s actually a QR code on the inside, and it’s very, very-

Corey Talbot:    Look at that. It folds up three ways, and it’s got pictures and graphs and all those other types of things to help out.

Corey Talbot:    Thank you for having me.

Tom Kraeutler:    If you’d like to learn more about Hyde Tools, visit their website at Hydetools.com. Hyde is spelled H-Y-D-E, tools.com.