LESLIE: Well, it’s a slice of the American dream: a little house with a white picket fence out front. But what do you do when that dream’s paint starts to chip?

TOM: Well, you might never have to worry about that if you choose a vinyl fence. Landscaping contractor Roger Cook, from TV’s This Old House, is a guy who has probably installed enough fencing in his career to surround the entire city of Boston. And he’s here to fill us in on the options available in vinyl fencing today. 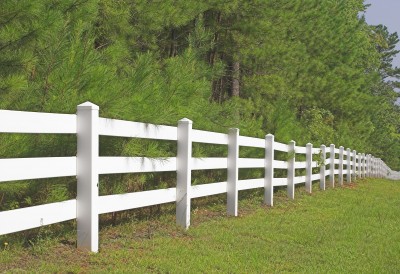 ROGER: That’s a lot of fence.

TOM: It sure is. You sure have hung a lot of sections in your day and of course, you started, like we all did, with just wood fencing. But the last decade has really been the decade of vinyl fencing in that particular industry. It’s got a lot of advantages, doesn’t it?

ROGER: Well, it’s come a long way since the first pieces we saw and now it’s good because you can get stuff, especially at the pro level, that’s really heavy fencing, that will really stand up to even gusts of wind to 75 miles per hour.

TOM: And kids and dogs and slamming gates.

ROGER: All that good stuff, too, yeah. I don’t know how it does with a baseball but we’ll find out about that.

TOM: Now, there are different levels of vinyl fencing. You know, I guess we could probably put them in the budget in the high-end sort of category. The budget. What are you giving up when you go for the budget level of vinyl fence?

ROGER: Well, it’s a thinner material. It’s got a little more spacing in it. The detail probably isn’t as good as the high-end. The fitting-together, the parts are not going to be as tight as the more expensive pro one will be.

LESLIE: Roger, what about yellowing? I know that tends to be an issue with certain grades of vinyl fencing. Is it really the more you spend, the less it will yellow?

ROGER: They have a process where there’s two layers on it. And the outside layer on a good fence is a titanium oxide and that’s the part that keeps it from yellowing. So if a fence has that, it’s not going to yellow.

The other thing that bothers me sometimes is the shininess.

ROGER: When you drive down the road, you can still see that shiny. But they’ve come up with some that almost have a buff exterior on them now and it’s come a long way.

Roger, what about installation? How does this differ from sort of the standard wood-fence install?

ROGER: Pretty much the same. It’s panels and posts that go in together. But some of them have posts that you have to fill with concrete to make them structural, especially if it’s a gate. You have to go do extra work on that part of it. But they just snap together. The wood ones slide together; these ones snap together.

LESLIE: And what about maintenance? Any sort of cleaning tips? Anything you have to do?

ROGER: It can mildew. You get vinyl – anything vinyl can get mildew on it. But that’s simply – a little Clorox bleach and spray it on and wash it off and it should take care of it. But other than that, it should be – you know what they say: vinyl is final.

TOM: Roger Cook, from TV’s This Old House, thanks so much for stopping by The Money Pit.

LESLIE: You can catch the current season of This Old House and Ask This Old House on PBS. For local listings and a step-by-step video on vinyl fencing and other projects, visit ThisOldHouse.com.