LESLIE: Alright. Let’s face it: sometimes, plans for your yard or even your house change and a tree can become an obstacle instead of a beautiful piece of landscaping. 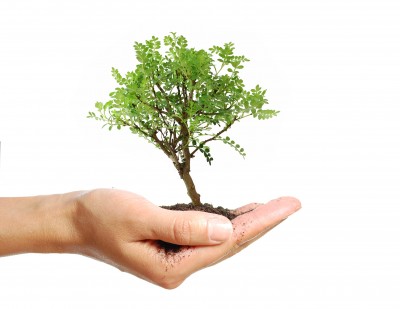 TOM: Well, if that tree is small enough, you can actually transplant it instead of chopping it down. Landscaping contractor Roger Cook, from TV’s This Old House, is here to tell us how.

And Roger, you’ve planted a lot of trees on the show and not all of them came fresh from the nursery. So what are the keys to a successful transplant and how big of a tree can we actually hope to move?

ROGER: You can move as big a tree as your wallet can afford.

ROGER: There you go. Time of year is critical.

ROGER: We like to move things early in the spring before they leaf out or in the fall when the leaves are falling off the tree. Both good times to put a tree in the ground and get it reestablished.

ROGER: You can do that. You can – in some situations, we’ve brought in tree spades and moved 30- or 40-foot trees that were growing on the site to a new location. Because unfortunately, we don’t plan well enough; we don’t plan for that tree to get as big as it did achieve, so we have to move it.

TOM: Now, a tree spade is obviously a very heavy piece of landscaping equipment. But if you’re a homeowner and just want to move a small tree, what’s the key to doing that successfully? Do you have to make sure you take enough of the root?

ROGER: That’s the key to the whole thing is the more roots you can take, the better off you are.

The first thing I’d do is evaluate the tree. Is it in good health? Is it structurally sound? Is it worth spending some money on and moving? If that’s the case, then we go ahead and we’ll dig the tree.

Now, when we dig a ball on a tree, we like to have 10 to 12 inches of root-ball diameter per inch of tree.

So, we just lay that out on the ground, we’ll go and dig a trench around, we’ll very carefully cut any roots we come across. Because roots that are cut clean heal faster. So we go down …

TOM: Oh, interesting. So don’t rip out the root; just slice it, essentially

ROGER: Right. If you cut it with a shovel, it’s real ragged, it can get disease or just rot in the end of it.

LESLIE: So are you just exposing the root and then using a good snipper or a saw?

ROGER: Not a good snipper and not a good saw, because you’re in the dirt. We use our old loppers and our old tree saws for this type of work, just to make a good, clean cut on it.

ROGER: Now, what we’ll do is we’ll dig down until we find no more roots. We usually go down 12 to 18 inches, on the average tree, in depth. Once we dig all the way around and we dig underneath the tree, we’ll take some burlap, wrap it and pin it around the ball to hold the soil in place. And then we put twine – jute twine – around it and tighten it and that even holds the soil together more.

LESLIE: Now, how do you plan for the weight on something like this? I mean that’s got to weigh a ton. You’ve got a 40-inch-wide by 12-inch-deep root ball. It’s not something Tom and I are going to go and be able to pick up this tree.

ROGER: Well, it is if you have the right equipment. On a small, tiny, little tree, you could use a dolly; you know, slide it underneath, tip the tree back. But we have what’s called a tree dolly and that’s set up with big tires and a lip on the front so if you tip the tree down one way, slide the dolly underneath and then tip the tree back, it sits right up on the dolly and we can move it anywhere in your yard. And then if all else fails, I have a Bobcat; I can move just about anything with that.

TOM: Now, I’ve seen those tree dollies; they kind of look like hand trucks but with an extended sort of lift gate, so to speak, or lift.

ROGER: Right, right. And a lot of times, you can rent those at a garden center. They’ll rent them to you for the day and that’s a great way to move trees around.

TOM: Now, once you’ve actually removed the tree and you’ve balled it up, do you have to plant it right away or could it sit, say, for the winter?

ROGER: We’ve taken some out of houses that were having additions put on. And we do a process, which is called “healing in.” We deal a – dig a slight hole in the ground maybe 3 or 4 inches deep, we set the tree down and then we put mulch around it or wood chips. And that encases it and helps it get through the season. And you can leave them there for a year or even two years, as long as you water them.

ROGER: Right. Leave it just wrapped; don’t unwrap it. Just leave it just like it is, water it and then when the addition’s done, you can take them all out and put them right back in your new addition.

TOM: And when it’s time to actually replant, any special steps you need to take?

ROGER: No. Just like you would any other tree, new or old – meaning a new plant you bought or a transplant – big hole, good soil, fertilizer, water.

TOM: Alright. Great advice. Roger Cook from This Old House, thanks so much for stopping by The Money Pit.

LESLIE: And of course, you can catch the current season of This Old House and Ask This Old House on PBS. For your local listings and a step-by-step video on tree transplanting, you can visit ThisOldHouse.com.