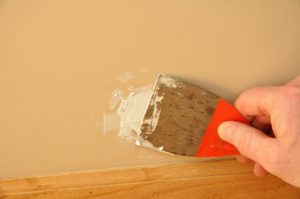 How to Repair Peeling Drywall Tape

How to Repair Peeling Drywall Tape

LESLIE: Rich in West Virginia, you’ve got The Money Pit. How can we help you today?

RICH: Hi. I’ve got a drywall question. My house is only about nine years old but a lot of the seams between the sheets of drywall have – where the tape was – the tape is cracked and it’s curled up a little at the edges.

RICH: It’s especially bad out in my garage – the unheated garage – on the ceiling pieces but even some in the house. You know, I don’t know if – I’ve heard different things: that they could have put it in when it was cold and it froze before it set or …

TOM: Let me tell you what’s going on, Rich. Nine years ago, as they do today, the builders will drywall the garage for one reason and one reason only: because they’re required to to maintain the fire separation between the garage and the rest of the house.

But being builders, they only do what they absolutely have to do to get past code. I always tell these guys, “It’s like you guys are proud of being – of getting a D, not an F. You want to get a D. Nobody really strives for an A.” It’s like – how would you feel if your kid came home from school and said, “Guess what, Dad? I got a D. Ain’t you proud?” The builders just do the absolute minimum.

TOM: So, in this case, Rich, if it’s loose and separating, you really can’t put spackle on top of that, because it’s not going to get between the paper tape and the drywall underneath. I would cut off any loose tape and then I would put another layer of tape on top of that or in lieu of that. And I would use perforated drywall tape, which is very forgiving, especially for somebody who’s an amateur spackler, because you don’t have to worry about getting the paste underneath the tape. It actually goes through the tape; it’s more like a netting.

TOM: And then you do that with three coats and sand it out in between. Take your time; it’ll take you a little while to kind of get used to it. But that’ll do the trick there. Then prime and paint.

And as for the areas inside the house, it’s not at all unusual for a nine-year-old house to get some cracks in the seams or where corners come together or above windows or doors. And you pretty much handle those the same way. If the tape is absolutely loose, you have to take it off and replace it. But if it’s just cracking, you can actually put that same type of drywall tape on top of that, three coats of spackle, prime and paint and you’re done, OK?

TOM: Alright. Good luck with that project, Rich. Thanks so much for calling us at 888-MONEY-PIT.

How to Repair Drywall Dings and Dents | Video

How to Repair Large Holes in Drywall or Sheetrock | Video

How to Repair Drywall Outside Corners | Video

How to Fix Cracked Drywall

How to Repair Trip and Fall Hazards before Halloween, Learn How Plastic Can be Green, How to Winterize Your Garden, Tips to Make Sure Your Windows are Working Properly and more

How to Fix Drywall Cracks