You are here: Home / Mechanical Ventilation for Healthy Indoor Air

LESLIE: Well, an energy-efficient home can save homeowners big on energy and cash. But since they’re so airtight, they also often require extra ventilation to maintain a healthy indoor environment. 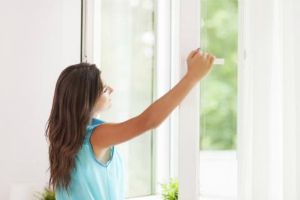 TOM: Yep. And that’s where mechanical ventilation steps in. Here to help us understand the options is Richard Trethewey, the plumbing-and-heating contractor on TV’s This Old House.

TOM: You know, it seems somewhat counterintuitive to think that we have to let air into a building when, for hundreds of years, we’ve done nothing but chase out these drafts.

RICHARD: Well, we had no issue having fresh air come into a building when the buildings were poorly insulated and the windows leaked and they had sash cords and things like that.

LESLIE: Because it was coming in everywhere.

RICHARD: It was coming in plenty.

RICHARD: But now, as energy went up and people insulated better, we really have to worry about getting fresh air – and I really mean that, fresh air – into the building.

TOM: So the trick is to do that, though, without losing the heating or the air-conditioning that you’ve paid to generate.

RICHARD: Right. So people used to think, “I’ll just put on a bath fan or a kitchen hood and it will pull air out and some air would leak in through the outside doors and windows,” and that’s not the case anymore. So, now, in order to guarantee you get fresh air into a really tight building, you need some sort of mechanical ventilation. And that is going to be either a thing called a “heat-recovery ventilator” or an “energy-recovery ventilator.” They’re fundamentally the same thing.

RICHARD: It’s a box – a magic box – that sits somewhere in your building and has four duct connections. One is to exhaust all the air from the kitchen, the bathroom or from some central area and you push that air through that magic box. And the air continues through a core inside and gets dumped to outside. But at the very same time, the same amount of air comes from outside, comes through that same box and goes in the opposing direction. It comes across that plate where the air doesn’t touch directly but the heat always transfers to cold.

TOM: Yeah. So the same way that a furnace works with a heat exchanger inside. The combustion gases run inside of that, the air moves over the outside.

TOM: You’re kind of doing the same thing when you have the air moving in opposite directions with a common surface in between that transfers not the air but the heat.

RICHARD: That’s right. And that’s the key to it: that you’re touching without contaminating the air between – there’s no contamination between those two airstreams. But what comes in is – 70 or 80 percent of the heat you would have lost stays within the building. And so then the only difference between the two models I talked about – the HRV and the ERV – is one removes humidity and one doesn’t.

LESLIE: In some sense, you want to take humidity out of the building to a certain percent. But you need it to also maintain the integrity of your furniture and your skin.

LESLIE: So, how do you find that balance?

RICHARD: Well, think about in the winter. People say, “Oh, I’ve got some relatively dry air in the building but at least it’s a little more moist than it is outside, on a really dry winter’s day.”

RICHARD: “At least I can pick up some humidity from showering and from cooking.” So, with an energy-recovery ventilator, that humidity transfers to the incoming air and stays within the building, so it does a nice job.

The heat-recovery ventilator doesn’t do anything for humidity; it just removes it. So, different people are more comfortable with it in different parts of the country. But in all cases, they both work beautifully.

RICHARD: Well, there’s no humidity in the American Southwest. There’s none anywhere.

RICHARD: So you could use it – wouldn’t even matter. A heat-recovery ventilator will be fine. But it’s just – I think it’s regional preferences. I’m a believer in the energy-recovery ventilator because it doesn’t need a drain and you can stick it anywhere – upside-down, sideways or backwards – in your house and it’ll just always transfer in the right direction.

TOM: What a great invention. Richard Trethewey, the plumbing-and-heating contractor on TV’s This Old House, thank you so much for stopping by The Money Pit. What a great way to conserve some energy and get fresh air all the time.

RICHARD: I wish we could get some fresh air in the studio.

LESLIE: You need to bring your equipment.

TOM: Yeah. We’ll have you work on this place today.

How to Get Rid of Mice in Your HomeHome Improvements for Healthy Indoor Air QualityA Safer, Healthier Home: Key Improvements

Spring Cleaning Hacks, Tips to Make Soggy Yards Disappear and How to determine if a home is Green