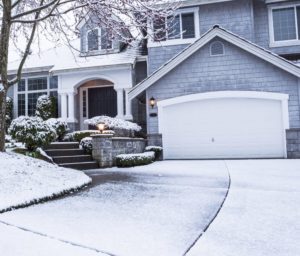 LESLIE: Now we’re going to head on over to Ohio where Norma is dealing with a leaking exterior door caused by ice dams. What’s going on?

NORMA: In the back of the house, near my glass sliding doors – was leaking.

NORMA: I could see the ceiling there was water coming in around the doors and leaking down into the track for – of the door. And that happened right after we had a really deep freeze here. And I believe the ice froze up, melted some and then froze back up again. And I looked it up and I think it’s called “ice jam” or something like that.

NORMA: That was close.

TOM: You were close, yep.

NORMA: Uh-huh. And so I called a roofing company and actually, they came out. And they told me I need a whole new roof, which is going to cost me about $20,000 because I’ve got a lot of roof.

TOM: Of course they did. How old is your roof?

TOM: Let me ask you something. You’ve got homeowners insurance?

TOM: Well, ice damming is covered by homeowners insurance. You need to call your insurance company, maybe even a public adjuster, and tell them you had ice-dam damage – a leaking exterior door caused by ice dams – and it needs to be fixed. Because to fix the ice-dam damage, they have to remove the roof. So guess what? You get a new roof paid for by them.

NORMA: Oh. Even if it’s just in one spot?

TOM: Yeah. Because you can’t just fix one spot. An ice dam’s an ice dam. If it’s covered, it’s covered.

NORMA: Oh, OK. And see, the other thing they said – that the roofing around the vent thing that comes out the bathroom – you know what I mean?

NORMA: It’s a vent on top of your roof.

NORMA: And they said that the roofing was sort of – not all the way – it wasn’t laying flat around that. Because I had some …

TOM: Well, look – listen, first of all, I don’t like this roofing company because I just think that they’re telling you a tale here to try to get to your wallet.

LESLIE: To try to get more money.

TOM: I mean the roofs never lay perfectly flat around plumbing-vent flashings because the flashing is under the shingles. And it basically makes the seal between the vent and the roof. So, that’s kind of, you know, not true, alright?

TOM: So I would – first of all, I would call my insurance company, report that you had an ice dam and a leaking exterior door caused by ice dams. And if they give you a hard time, find a public adjuster because public adjusters work for you and they get a percentage of the claim. And they usually find a lot more than the insurance-company adjuster does. So they kind of pay for themselves. Let them fight the battle.

But to fix this leaking exterior door caused by ice dams, the roof comes off. There’s a type of roofing material called “ice-and-water shield.”

NORMA: Yes. That’s what they said I didn’t have.

TOM: It goes up about 3 feet from the edge of the roof, up into the roof, up over the sheathing. And then once that’s down, then shingles go back down on top of that.

TOM: So, that’s what causes it and that’s the fix. And the good news is that homeowners covers it because it’s storm damage.

NORMA: Yeah, it is storm damage. You’re right. OK. I never thought about it like that.

NORMA: Thank you so much.

NORMA: So I could call my insurance and get that repaired. And the second thing you said was – that I was noting, that I’ve already forgotten. What was the other thing you said?

TOM: What? About the vent – plumbing vent – or about the type of insurance adjuster to use?

NORMA: Oh, yeah. Public adjuster. Is that what you called it?

NORMA: Yeah, OK. Alright. Thank you so much.

Spring Storm Damage? Here’s How to Make Your Insurance Company Cover the Repairs

Preventing Ice Dams on your Roof