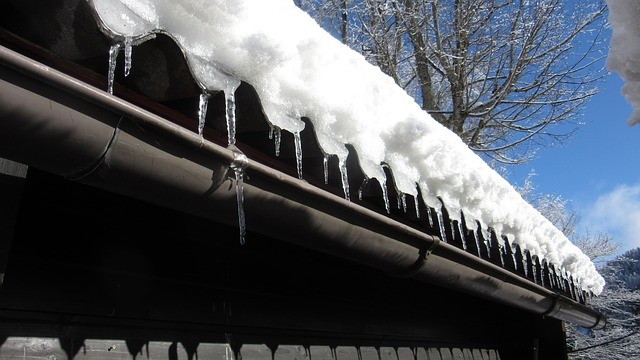 Home » Home Page » How Can I Fix Leaks Caused By Ice Dams?

LESLIE: Becky in Missouri, you’ve got The Money Pit. How can we help you today?

BECKY: Hi. I’m having trouble with leaking on my back porch. I have a 20×12 porch and it’s not completely flat. It is part of the house but it’s got rolled roofing instead of the shingles like on the house. And there’s a little bit of a pitch but I had a new roof put on in 2016 and have had the people come out several times because of leaking in the middle, under the ceiling part of it. And also, the chimney is right there on the edge and it’s leaked around there, too.

But they fixed that but we’ve had ice before, which I’ve never had trouble until last week. And I had them come out because it was leaking and there was ice on the – because of all the bad weather. And they said it was an ice – caused by an ice dam. And some roofs do it and some don’t. There’s nothing they can really do to fix it. But it was leaking in the same place that I had just regular rain leaks before.

TOM: OK. You want the good news or the bad news?

BECKY: Start with the bad.

TOM: So the bad news is that you do need to take your roof off and rebuild it. Now you want the good news?

TOM: Ice-dam damage and ice dams are typically covered by homeowners insurance. And the way they’re fixed is basically you have to take the roof apart and you have to apply something called “ice-and-water shield,” which kind of looks like rolled roofing but it’s designed to sort of seal right up against the roof sheathing. And it’s kind of like putting a rubber membrane, almost, across the underside of your entire roof. And then, over that, you put the roll roofing or whatever other type of low-slope roofing product you want to install.

And when you’re doing the ice-dam repair with the ice-and-water shield, you will, of course, replace all the flashing around the chimney. Because we are going to be working around it, so you pretty much have to do it. And that will deal with that issue.

So what I would do is I would contact a public adjuster, not your insurance company, first. Although you could report it to them but a public adjuster – because these guys are independent. They work for the homeowners. They work on a commission based on what they collect from your insurance company. And have them write up a claim and file a claim for you. If it’s done well, you could get the roof, you could get the ceiling painted, the whole nine yards.

BECKY: Oh, well, yeah. That’s wonderful. So, how are they listed as far as a contact – I mean a public adjuster?

BECKY: Alright. I will do that. And thank you so much. Appreciate your show.

7 Ways to Get Your Home Back in Shape After Winter

Why Do Ice Dams Form On My Insulated Roof?