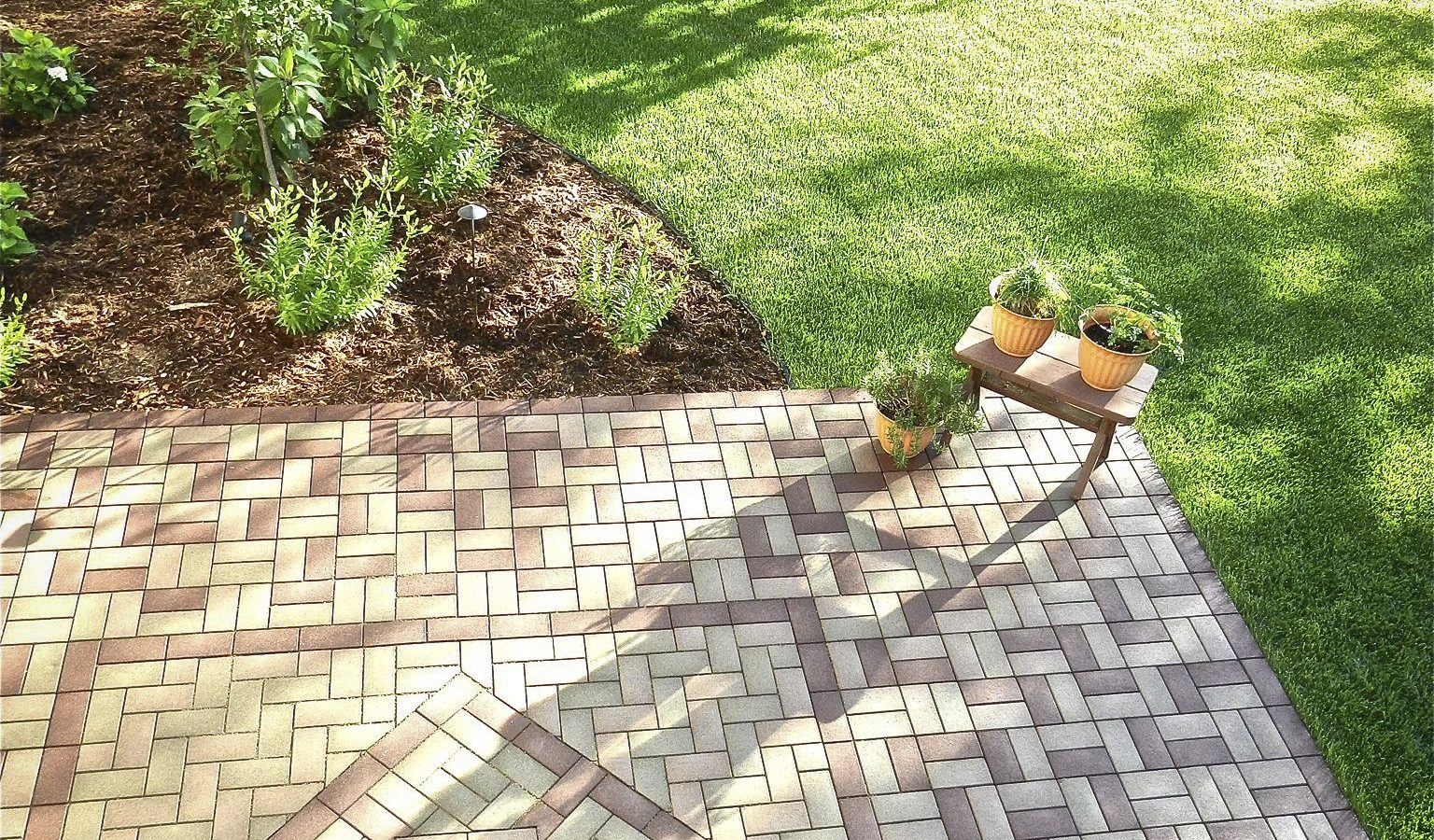 How to Repair a Sinking Paver Patio

How to Repair a Sinking Paver Patio

LESLIE: Well, building a brick-paver patio is a very popular do-it-yourself project. But if you’ve ever built one only to find that it’s started to sink or it ends up getting very weedy, you might be wondering if all of that effort was for nothing.

TOM: Well, not to fear. A paver patio that has started to sink can be saved. And with us to talk about that is a guy who has built more than his fair share of patios, Roger Cook from TV’s This Old House.

ROGER: Hi. How are you today?

TOM: And I love this project because it’s really fun; it’s like putting a puzzle together. But it’s not so much the top that counts, it’s really what’s underneath. Is that where most of these paver projects go wrong?

ROGER: But when a patio settles, that’s when you know the proper sub-base wasn’t put in.

LESLIE: So what is the correct process and really, how deep do you need to go down to make everything a successful start?

ROGER: Well, we always say the deeper the better but the soil really tells you how deep you want to go down.

When you start digging out for the patio, you want to remove any loamy, organic material because that’s going to swell with water and move up and down. So, usually, we dig out anywhere from 8 inches to a foot, depending on the subsoil. We put in a good draining gravel, which is a combination of sand and three-quarter stone and we compact that all the way up to 1 inch below where the pavers are going to go. Most manufacturers want you to …

LESLIE: And that’s all that mix?

ROGER: All that mix. Compact it. We use a mechanical compactor that we walk around with and it really packs it down.

ROGER: Some people will use a hand one and it’s a lot of work to get that compaction done properly.

LESLIE: OK. So that’s up to about an inch before the paver.

ROGER: Right. And most manufacturers like to see 1 inch of sand underneath their pavers.

LESLIE: Just for sort of like a smooth, uniform sort of pressing-into surface?

ROGER: Right. It’s a great surface. We can level off and all the pavers will go in level.

TOM: Now, speaking of leveling off, is it important that a paver patio have any kind of pitch to it or can it just be flat and drained?

ROGER: We don’t want anything flat. The minimum pitch is an 1/8 of an inch per foot and that’ll carry the water off. Bigger patios, we would go a ¼ of an inch.

But you don’t want to go much more than that because if you sit on them or put a drink on them, someone will say, “Hey, my drink is crooked.” And then, no, that’s just the patio, so …

TOM: It’s the patio. Now, let’s talk about how to fix one that’s already constructed. If we start from scratch, we know we need a proper base. But what if we’re staring at our patio outside our kitchen window right now and we notice that it’s really sunken out? Do we have to take it all out and start over again or can we just sort of try to rebuild the area that’s damaged?

ROGER: I would just rebuild the area that’s damaged. Sometimes, I’ll pop all the brick out and will be able to just do that one little area. You’ll dig down and find there might have been a stump there or even a rock that has moved around, something that would cause a physical problem. You dig that out, repack again and work your way up and set everything back in place.

But if it’s a patio that has a lot of cuts or the area you’re doing has cuts, you should label them. Not only label them but take a picture with the numbers on them so that when you go back to assemble them, you know where each piece goes.

TOM: Oh, great tips. So basically, you’re going to number the bricks with a lumber crayon or something like that?

ROGER: Exactly. And take a picture of it in place and then when you go to put them back together, you won’t mix everything up and have a lot of work ahead of you or end up with the wrong brick in the wrong place.

LESLIE: Now, I notice in the process, when you said it was the gravel mix and then the sand, there’s no weed blocker or anything installed in there. So what do you do about, you know, weed growth that may occur?

ROGER: That’s one of the biggest complaints we get about patios. There’s two options: either treat it with an herbicide as it shows up or there’s a new product called polymeric sand that you sweep into the patio. That not only locks the patio together but it makes a barrier which will keep those weed seeds from getting in there and germinating.

TOM: Because it’s really the weeds that – seeds that fall on the patio. They’re not coming up under …

LESLIE: And not coming from below.

ROGER: No. They’re not coming from below.

TOM: And they find that little sweet spot with everything they need: a little organic material, some moisture and then they pop up from there.

TOM: The polymeric sand can be repeated from time to time?

ROGER: Yeah but you’ve got to – if you’re going to do it, you have to scrape out the joints and redo it. Usually, one application works really well.

Now, Roger, paver patios, we should just talk a bit about the difference between a paver brick and a regular brick. Because paver patios really are designed to be stacked side by side but a traditional brick is not.

ROGER: Well, it depends. It depends. There’s a lot of different types of brick. The paver brick are exactly the same; we call them modular. Everyone has the same width and the same length as its partner. So that allows you to do different patterns, like a herringbone or a basket weave.

The other type of brick is called a clay brick.

ROGER: It’s fired in an oven and it shrinks down and that’s what makes it hard and repel water.

Now, certain ones will come out of the kiln – if they’re closer to the fire, they’ll shrink more than the outside ones. So when you go to do a pattern with those, they’re very hard to mix together and have the pattern come out without not having big, big joints.

There are some types of brick, though, that will come out just right and you can use those. You have to know whether your brick is modular. If it’s modular, then it’s great for a pattern.

TOM: Now, what about slate patios? I mean those are gorgeous but how do you control the weeds and the spacing on something that’s so natural as a slate tile?

ROGER: Some of this polymeric sand is made so that it’ll fill the joints like that. They have some for ½-inch joints, some for 2-inch joints. It’ll work. The other thing you can do is – just keeping the joints filled with a stone dust will help pack in and keep the weeds from getting in there. Otherwise, again, you have to go to some sort of herbicide treatment, whether it’s a chemical one or an organic one like a vinegar mix.

LESLIE: Mm-hmm. And is there ever an instance where you should actually grout your patio or are you just dealing with so much freezing and thawing that you’re going to get heave and it’s just going to always crumble?

ROGER: You know, the joint is the weak point of any cement patio. That’s why I love the pavers. We can lift them up and we can do anything with them. On a flagstone patio that’s on cement, that joint keeps popping because everything moves. So, you see a patio where you go in and part of the joints look great because they’ve been redone and the other parts are not so good. It becomes a year-after-year-after-year thing.

ROGER: I really don’t like setting things on cement, in New England, especially.

TOM: Roger Cook from TV’s This Old House, thanks so much for dropping by The Money Pit once again.

And by the way, there’s a really great video on how to repair a brick patio on ThisOldHouse.com. You’ll see Roger do this project step by step.

ROGER: It’s a little bit of work to do it but it’s a lot better than jackhammering out a concrete patio.