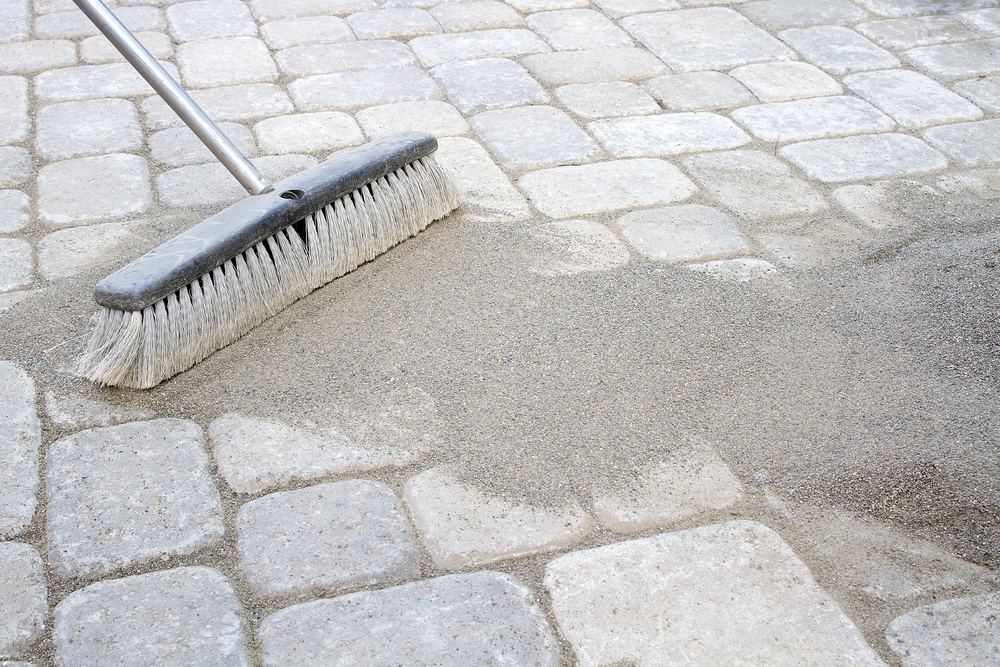 LESLIE: If you’re aching to get outside to enjoy meals or entertain your friends in your own backyard, building a brick-paver patio is a great place to start. 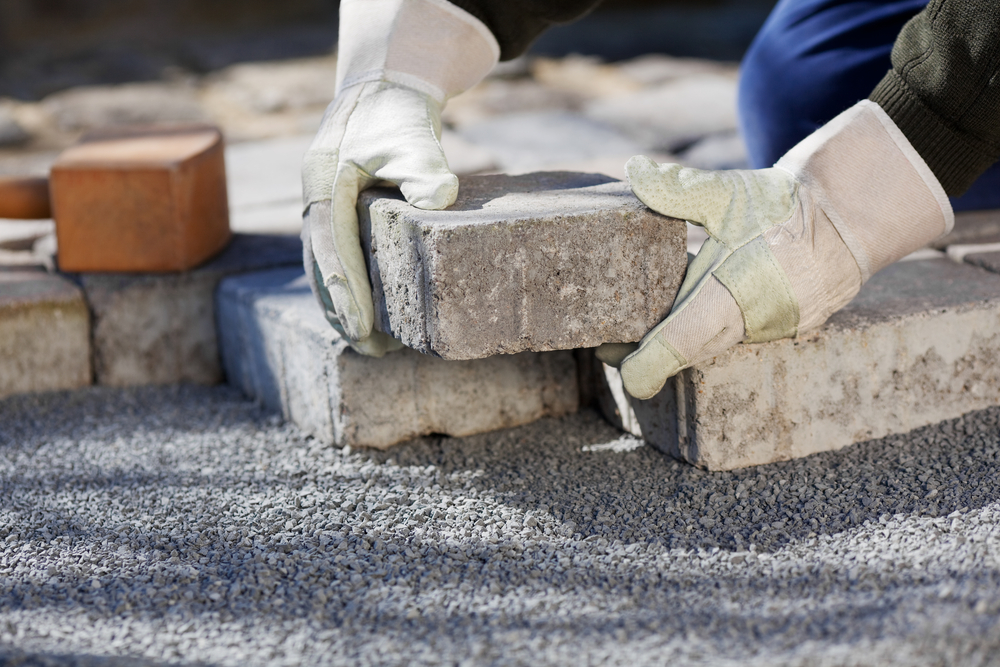 TOM: Absolutely. But unfortunately, we get a lot of calls here at The Money Pit about paver patios that were not built right to begin with and have since turned into a saggy, weedy mess. To make sure that doesn’t happen to you, we welcome Roger Cook, the landscaping contractor for TV’s This Old House.

ROGER: Thanks. I just hate a saggy, weedy mess.

TOM: It’s a very bad thing to have a saggy, weedy mess, especially when it’s your paver patio. And a lot of these are built but they kind of fall apart. I think people concentrate on just the laying of the bricks and not so much on the prep. Is that where it goes wrong?

ROGER: Yeah, I describe it like a cake. You’ve got the inside and it’s got to taste good because once you get through the frosting on the outside, it’s the whole thing. So the inside is the gravel, the prep and all the work you do and then the icing is either the pavers or the bluestone you put on the outside.

ROGER: If you put a good bluestone on a bad inside cake – gravel – then it’s all going to separate and fall apart.

TOM: It’s like painting. People never want to prime; they just want to put the topcoat on and then the paint doesn’t last.

ROGER: Yeah. It looks good for a little while but it never pays off.

ROGER: Paver bricks all carry a code, which is SW for severe weather.

ROGER: The building bricks are not made for extreme ground contact; they’re made on one side as basically waterproof so that when you build the – have that side exposed.

TOM: And they’re also not dimensional. In other words, with the paver brick, you have – one long is equal to two wide with no mortar joint. With building bricks, they’re a little bit less than that because they leave space for the mortar, right?

TOM: So it’s a different shape. You can’t really put it together. It’s not quite as easy. And as you say, it’s perhaps a more porous brick; it’s not going to stand up as well.

ROGER: Right. And we want something that’s easy to work with so that the brick goes into a pattern, something we can make easily without cutting each interval piece or ending up with big gaps. And that’s when you get weeds.

LESLIE: So, now, exactly – to avoid weeds and to avoid the whole thing sort of becoming misshapen and cracking and rising and falling in different areas, what exactly is the best step-by-step sort of process to make sure that you’re doing it once and you’re doing it right?

ROGER: It all starts with the excavation and the insertion of your base material. A basic rule of thumb, we say, is to dig down 7 inches. But what I tell people – if you run into clay or you run into more topsoil, dig deeper; it’ll be worth it in the long run.

Then I like to run a plate compactor over the area to make sure everything’s solid. Then we add pack, which is a combination of three-quarter stone and stone dust mixed together and we start building up in 2-to-3-inch layers and compacting that until we get ready for our final layer, which is usually either sand or stone dust. And then we put the pavers on top of that. So it has a secure base that’s going to move in a minimal amount and your pavers won’t move too much.

TOM: So that pack at that layer, that really has to be rock-solid before you put the bricks on it. I think people – sometimes they think that still is sort of part of the dirt and can be a little loosey-goosey. But it’s got to be really stiff before they lay bricks on top.

ROGER: No, it’ll – it’s like you say: after a year or two, all of a sudden everything starts to move.

ROGER: And that’s the problem, because they just didn’t go deep enough.

TOM: Now, what about retaining the edges? I’ve got a paver patio that I’ve got to repair this year that’s round on a corner. And the mason, when he put it in, he had sort of a bit of mortar that held that in.

ROGER: If it’s a round corner, it’s really hard to do using the brick.

ROGER: If they’re on a soldier course or the sailor, turned one way or the other upright, they have a hard time making a corner like that and you leave big gaps behind.

ROGER: They make steel edging that’s about a ¼-inch thick. And if you wrap that around that edge and use the steel stakes they give you, it’ll hold that corner in place.

TOM: So use the banding – the premade banding – for those round corners.

ROGER: Yeah, yeah. Now, one thing to remember is pitch on a patio. It is critical to get that water off the patio. If it sits there and absorbs and makes a puddle, there’s nothing that’s going to help it. So we like to use a ¼-inch of pitch per linear foot. So if your patio is 12 feet wide, it would have 3 inches of pitch from a high point to a low point, to allow the water to run off.

LESLIE: And what can you do to protect your paver patio success, because now you’ve done it right, from getting weed growth through it or any insects?

ROGER: There’s a product called polymeric sand, which we’re now using in all our patios. And it has a little bit of give to it so that it’ll move a little bit with a brick.

ROGER: It doesn’t let water go in between the joints, it doesn’t let soil go in. And no weeds and very little insects will bother it at all.

LESLIE: So that’s your last step; that’s not the sand you’re using in the construction process for the base.

ROGER: No. This is after you get the whole patio laid. You sweep in this and then you water it into the joints. And it works really, really well when you follow the directions on the bag.

TOM: And if you do get the occasional weed that comes up, is Roundup an appropriate herbicide to use?

ROGER: What I will tell everyone is if there’s an organic option available, like vinegar, try that first.

ROGER: But before you put it on your patio, take a couple of bricks and spray it on there because sometimes it’ll discolor the brick.

TOM: Just to make sure. Yeah. Great advice. And I will tell you this – don’t ask me how I know – when you do spray it, make sure it’s not a windy day.

ROGER: Yeah. How’d your other plants do?

ROGER: Well, that’s a good point. People will have to remember that these weed killers kill indiscriminately.

TOM: Yeah. A little trick of the trade is to take a milk bottle, cut the bottom out and then cover the weed and spray through the top of the milk bottle so it kind of contains it.

ROGER: What we’ll do is we’ll take and slice a funnel and put it over the end of the nozzle, so you just put that over the plant.

TOM: Yeah, that makes sense, too. Great trick. That’s why I love having you on the show, Roger. You’re always full of lots of knowledge, lots of tricks of the trade earned through many, many years in the business. Thank you so much.

TOM: Too many. It seems that way. But I tell you what, there’s always something new for us to learn. Thank you so much, Roger. We really appreciate it.

ROGER: It’s been my pleasure.