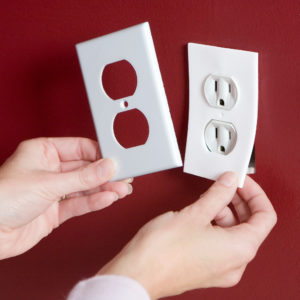 LESLIE: Well, if you’re in New Jersey you can find The Money Pit on WCTC, like Nate does. And Nate, you’ve got some electrical questions. How can we help?

NATE: Well, I have an older home and it has two-prong outlets. And I know I can purchase an adapter that has the little tail; just take the center screw out of the plate.

NATE: Right. Well, is there a way I can change these plates over to a three-prong?

TOM: Yes, there is a way to do it. You can install a ground fault outlet on a two-wire system. It should only be done by a qualified electrician. It should not be done by a do-it-yourselfer because if it’s done wrong it could be dangerous. But, basically, what a ground fault outlet does is it detects any diversion of current to a ground source … to a ground source and then it turns the outlet off. So in that way, you can get ground protection without having a three-wire house. What you have is a BX cable; probably the armor clad cable, the metal …

TOM: And the actual sheathing of that cable serves as the ground. But if you were to replace those two prongs with three-prong ground fault outlets, it could be done. But again, do not do this yourself because if it’s done wrong, you’re going to defeat the purpose and you’ll think you have a grounded outlet and you won’t. And then you’ll plug something in that has a short and you will take the brunt of the electricity.

TOM: You know why they call it a ground? Because it is the connection to ground.

NATE: Thank you so much.

TOM: You’re welcome. Thanks again for calling us at 888-MONEY-PIT.

Ask Your Electrician for These Outlet Upgrades

How To Replace An Outlet | Video

How to Convert Electrical Outlets from Two-Prong to Three-Prong

Tips for Converting to Three-Prong Outlets