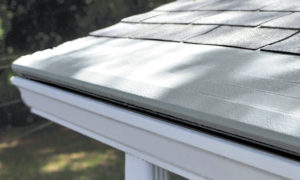 LESLIE: We’ve got Terri in Pennsylvania on the line who’s got a gutter issue. She wants to know how to deal with gutter stains. Tell us what’s going on.

TERRI: I have white aluminum gutters and on the gutters that face the southern exposure, the part of the gutter that faces out is turning black and there’s like – where the water runs off it, it’s like a dark gray and just water drips all along the face of the gutter.

TOM: Right. So does it seem like the gutters are overflowing and the water is coming over the top and getting these sort of drip marks and gutter stains? Is that what’s going on?

TERRI: And then the water would roll off of that and then go into the – it would be caught into the gutter. So, it’s a different type of leaf system but I’m still having the same black drip.

TOM: Right. OK. So, first of all, I would make sure that the gutters are not blocked and that water isn’t backing up and overflowing that particular gutter, so that – because that water rolling over the top of it, it can get behind it, it can rot out your fascia.

So what I would do for the gutter stains is I would wash them down with a trisodium phosphate, get as much of that gunk off. Then I would prime them and I would paint them again. But just – but do make sure that they’re not clogged, because that could be leading to the problem.

TERRI: But yeah – no, they’re definitely not clogged. And I tried scrubbing it – the ones that aren’t on the second story, where it’s worse. The ones that are on the first story, I tried cleaning it with a Fantastik and it bleeds into the stain a little bit but I didn’t realize that the aluminum gutters – was it like a hydrostatic or electrostatic painting process?

TOM: What happens is – and you’ll see this: if you take the gutter and you wipe your hand over it, you’ll probably get some white paint that will come off. It oxidizes because it’s exposed to UV. And so then the paint doesn’t tend to last more than maybe 10 years or so on aluminum gutters.

So I think, though, if you clean off as much of this thing as you can, prime it and paint it, it’ll look great.

TERRI: Alright. Great. I’ll give it a try.

TOM: Terri, thanks so much for calling us at 888-MONEY-PIT.

Cost of Gutter Guards: Are They Worth It?

Gutters: How to Maintain Them

Wood Deck: How to Repair, Restore, Stain and Refinish

How To Stain A Deck | Video

How to Fix Leaky Gutters

Gutters for a Curved Roof?

How to Repair Damaged Gutters

How to Extend Roof Shingle into Gutters

How To Maintain Your Lawn in the Heat of Summer, How to Save Water and Money When Washing Your Car, Learn the Best Kitchen Counters for Your Needs, and More.

How to Paint Faded White Gutters