You are here: Home / How to Choose a Carbon Monoxide Detector

LESLIE: Well, you can’t see it or smell it but it can be fatal. We’re talking about carbon monoxide, a deadly gas that can build up in your home when fuel-burning appliances aren’t working right. 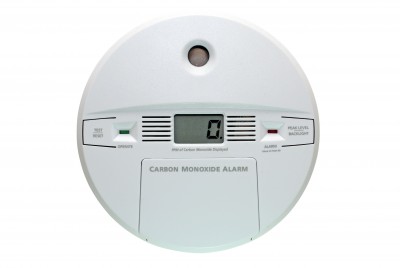 TOM: That’s right. And CO-poisoning symptoms mimic the flu, so it can be hard to figure out what’s going on, that is, without a carbon-monoxide detector. Here to tell us how to choose the best CO detector for your house is Richard Trethewey, the plumbing and heating contractor for TV’s This Old House.

TOM: Now, this is a problem that can be really difficult to spot. In fact, there have been reports where even medical pros have been sickened because the gas not only mimics symptoms of the flu, it actually causes confusion and makes it pretty much hard to think straight. So, what’s the most common cause of a carbon-monoxide problem in the house?

RICHARD: Well, any fossil fuel-burning appliance – gas or oil – anything you’re going to have combustion products that should go up the chimney, one of those byproducts when you burn a fossil fuel is CO – carbon monoxide. There’s also CO2 and a little bit of H2O – water. Now, those are all supposed to go up the chimney together. But if a little of this carbon monoxide comes back into the building, it is odorless, it is colorless and it can be absolutely deadly.

RICHARD: Well, it’s robbing the oxygen out of your body and you’re slowly depriving your brain of any oxygen to be able to process what’s going on.

LESLIE: So, really, the best plan of attack to make sure that you and your family are safe is to have a carbon-monoxide detector, correct?

RICHARD: Right. In so many jurisdictions, it’s now code and law every time you exchange a house or pass papers, you have to be sure you have CO. And it’s really a good thing to have, because houses in the winter are tighter, you’ve got this fuel-burning appliance, people are going to go to sleep and we want them to wake up every single morning. And that’s when the CO detectors are really important.

LESLIE: Mm-hmm. Do you want to have one on every floor or just by these fossil fuel-burning appliances?

RICHARD: Well, it’s every floor at least and it really should be near every bedroom. And you really can’t have too many, I tell you. The nice thing about this, if there is a nice thing, is smoke, you have to put the sensors up high to be able to – because smoke rises. CO is insidious; it will fill the entire room. So as long as you have one in the room, it doesn’t have to be high at the ceiling; it just has to be in the space and you’ll be able to pick it up.

LESLIE: Is it even better to keep it lower to the floor, since it doesn’t rise as quickly?

RICHARD: Not really. It’ll fill all the air molecules at the same pace, so it just wants to be in the space.

TOM: So, we know it’s a serious problem, we know detectors can help us but how do we choose the best detector for our own personal needs?

RICHARD: Well, there’s a lot to choose from. The simplest one is the most affordable: you just plug it into an electrical outlet. They’re better than nothing but they’re not going to work in a power outage. And if you’ve got a backup generator, that, too, is a fossil-burning appliance, so you might want to be careful there.

There’s battery-powered/plug-in models that will continue to operate after the power goes out, so that’s a good one. But you’ve got to make sure those batteries are working, just like smoke detectors; they’re only as good as their backup battery.

And then they make these combination units that you see nowadays in most renovations and new construction that detect both smoke and carbon monoxide. They’re hardwired into the home’s electrical systems and they’re usually ceiling-mounted, because smoke rises for the smoke detector.

TOM: Now, that’s a good point because carbon-monoxide detectors, by themselves, can really be anywhere on the wall, right?

RICHARD: That’s right. CO will really fill all the air molecules in the room, so the location of the CO detector is much less important where it is in the building, as long as it’s in the right place. And in that case, you want to be sure there’s one on every floor and you’d like to have one in each bedroom.

LESLIE: Now, Richard, what do you do if one actually goes off? I mean I can’t tell you how many times I’ve heard of people saying, “Oh, my carbon-monoxide detector went off but I didn’t believe it, so I just turned it off.”

TOM: And that’s a good point. You say trust your data, trust the information that’s coming to you, because many folks compare carbon-monoxide detectors to smoke detectors. Difference is when a smoke detector goes off, you smell the smoke, you see the smoke.

LESLIE: There are symptoms of it.

TOM: When a carbon-monoxide detector goes off, you’ve got to trust it.

RICHARD: That’s right. You only hope that the detector goes off. Because every winter, we hear tragic stories about families that didn’t wake up in the morning because they didn’t have one or the battery wasn’t maintained. And it is this silent, odorless killer.

TOM: Very important advice. Richard Trethewey, the plumbing and heating contractor from TV’s This Old House, thanks for stopping by The Money Pit with that important safety tip.

LESLIE: Alright. You can catch the current season of This Old House and Ask This Old House on PBS. For your local listings and a step-by-step video on how you can choose a carbon-monoxide detector and other projects, visit ThisOldHouse.com.