You are here: Home / How to Build a Bathroom in the Basement

LESLIE: Well, if you’ve got a basement space at home, adding a bathroom can make that space more usable and add to your home’s value. 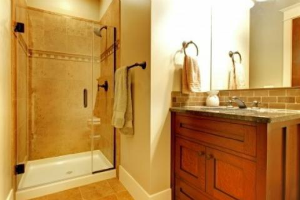 TOM: Yes. But gravity being what it is, bathrooms that are below-grade need special considerations in order to go with the flow. Here to talk us through the options is a guy that always goes with the flow: Richard Trethewey, the plumbing-and-heating contractor on TV’s This Old House.

Going with the flow is pretty much your business, isn’t it?

RICHARD: We try to do it as much as we can.

TOM: So let’s talk about basement bathrooms. I mean they definitely add some value but because they’re below grade, you really need to have some special considerations about building one, right?

RICHARD: Right. Everybody, really, would love – if they have a basement, they would love to add a bathroom to it.

LESLIE: Yeah. But can I jump in here?

LESLIE: There’s a time when I like to go look at houses, just for fun; not that I’m in the market to move.

LESLIE: But I enjoy going to open houses. And you’ll get there and on the listing, they won’t say anything about a bathroom in the basement. And then you get there and it’s sort of like the – “Oops, by the way, there’s a bathroom here. Just ixnay on the bathroom-ay.”

RICHARD: Oh, it’s just that it exists and nobody talks about it?

LESLIE: Yes. Like are there codes? Are there local reasons why you wouldn’t be able to have one?

RICHARD: Well, there are codes because you have to make sure something is properly vented and is permitted. And in the case you talk about, maybe that’s the case that one of those conditions were not met.

Typically, most people want to have a bathroom. Now, you look in the basement and you look at where the main drainpipe leaves the building. If the main drainpipe comes down through the building and exits at a point 4 feet up in the basement wall, there’s no way that you can have a basement bathroom that works by gravity, where you don’t need a pump or some other method. And so you’re locked out of a conventional way.

If you do look and see that pipe go down into the floor, it means that it will turn to horizontal – to 90 degrees – and now you can open up the concrete floor and you can break into that piping and you can actually have a bathroom down in the basement. Now, everybody wants that but it’s a big job. You break up the concrete. Now you can put in the drain lines for both your toilet and your shower and your lavatory.

But now the challenge is you have to find a way to vent that entire bathroom group. So it means that you either have to run a vent pipe up through the building and carry it up to a point – to the highest point in the building before you exit the roof and then reconnect to the vent stack. And that often becomes prohibitive. So the conventional way is oftentimes the much more difficult way to do it and to do it legally.

So there’s other alternatives. Some people love these beautiful macerators. It’s a – there’s a couple different manufacturers. One of them is Sani-Flush, I remember. And it has this little box that lets you put the toilet pipe – maybe you just have to build up a short stoop. You might only go up by 12 inches and have the bathroom 8 to 10 or 12 inches higher. And now, everything works into this little pump unit that macerates any solids but also sends it out through a 1-inch discharge pipe. And so now it becomes almost unlimited to where you can put a bathroom.

TOM: You know, you’re the only guy I know that would ever use the word “beautiful” and “sewage pump” in the same sentence.

RICHARD: Well, that is my dementia.

RICHARD: That was a great movie.

So, the other thing that is – if you want to have a more conventional and not use the macerator, you also could dig a pit in your basement and put in a thing called a “sewage ejector.” That’s a receptor that’s going to take in 30, 40 or 50 gallons of liquid and that liquid would be liquid and solids. And so then you would rough the …

RICHARD: Waste, absolutely. That would – so you would rough the bathroom into the basement, have all of its drain go by gravity back to this receptor.

Now, in that receptor, at the bottom of it is the equivalent of a sump pump. And so as the level rises, then and only then would that pump come on and would then pump the liquid up and into the conventional drain line.

LESLIE: But that sounds like you need some sort of property to have that. You’re digging holes and making pits.

RICHARD: You need a – you know what you need, Leslie? You need a jackhammer. And it’s a lot of work. We did it – I remember we did it in Year One of Ask This Old House. It was one of the first how-tos we ever did. And it got unbelievable response. And it was before we even know about the macerators or showed them. But people really would love to have that. It expands their living space. If you have a basement, it’s a shame not to have a …

LESLIE: Oh, please. My son tries to go to the bathroom in the slop sink in the laundry room. That’s like his dream. I’m like, “You’re not allowed.”

TOM: Yeah. Got to love them.

TOM: Well, the other thing about putting that sewage lift pump below grade is now you can tie in your sink and your shower easily.

RICHARD: That’s right. You can have a full bathroom down there, right.

TOM: Right. Now, I know you can do that with a macerator but it has to be up – elevated – like a few inches, right?

LESLIE: To get things to go in the right direction.

TOM: Something that could be a step-up shower.

RICHARD: You could put the macerator down below the grade but that’s more work than it’s worth. The ones – the macerators are generally used to be above grade and you build up from there.

Now, there’s also an eco-friendly one that we see more and more people at least being interested in, which is composting toilets. It’s sort of like having your own little compost pile in your own bathroom. And they do a good job in places. And I think we’re going to have to look at these more often.

We did a story on Ask This Old House this year about the very real water-supply issue in the American Southwest. And if you’ve ever seen any map of how hard it’s getting, water is a big, big story now. And the toilet is one of the major users of water in the house. And it’s either the toilet is the biggest one or you’re trying to have a green lawn. And both of those things will be challenging going forward. And then there’s – some of the macerating and compost toilets will use much less water.

TOM: So, the options are to use the existing system, to use a macerator, to use a sewage-ejector system or a composting toilet. I imagine they all have their own unique maintenance needs. Is one more work than another, in terms of maintenance?

TOM: And easily composted later. And I think we’ll leave it right there.

TOM: Richard Trethewey, the plumbing-and-heating contractor on TV’s This Old House. See, I told you he always goes with the flow.

TOM: Thank you so much for stopping by The Money Pit.

RICHARD: Great to be here, as always.

Bathroom Vent Fan and Ventilation: the Best One

Tips for Adding a Basement Bathroom

How to Install a Basement Toilet

How to Finish a Basement