You are here: Home / Basements & Crawlspaces / Basement Waterproofing Tips | How to Fix a Wet Basement

In the 20 years I spent as a professional home inspector, the top three problems my home-buying clients were concerned about can best be summed up this way:  water, water and water!  Waterproofing your home is the surest way to avoid a wet basement and make sure buyers stay interested.

While leaks through roofs, pipes and basements are constant concerns, a wet, leaking basement always ranked highest as the home improvement problem most likely to send buyers running for the nearest open house.

Whether you are a buyer, seller or owner of a home, wet basements are always a concern. Not only is a wet basement unusable, flooded foundations can be seriously weakened and toxic mold–the newest threat to residential indoor air quality–can fester faster when an ample supply of water lies just underfoot.

The good news about these unplanned indoor pools is this: while wet basements are often thought of as one of life’s biggest home repair headaches, they are generally easy and inexpensive to fix. Yes, that’s right–easy and inexpensive!

The wrong way to waterproof a wet basement 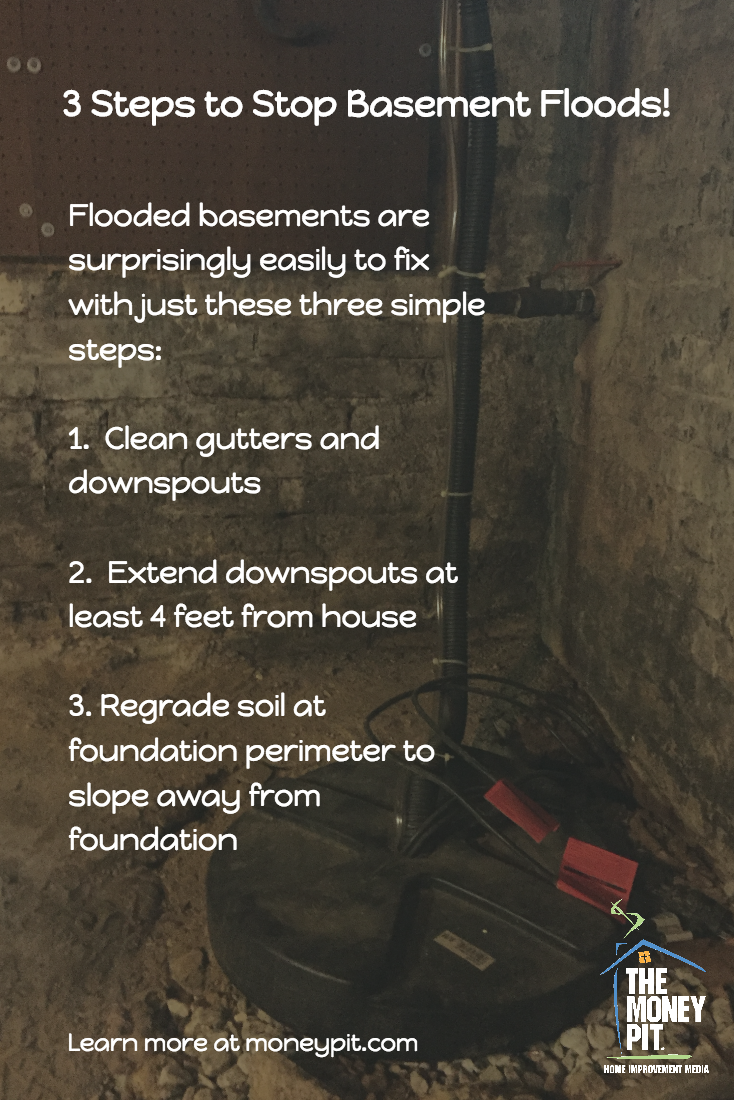 Ask 10 people how to fix a wet basement and you’re likely to get answers that include use of jackhammers to break up basement floors, backhoes to dig out dirt from foundation walls, sump pumps that have to be wired and plumbed, and other such drastic and expensive measures.

While these solutions may seem to make sense, they all attempt the impossible: to seal a foundation so tightly that it will somehow hold off water like a boat. Well, unless your house is a houseboat, it won’t float, so you might as well stop thinking about all the ways to keep it from doing that.

Most people blame a wet basement on a high water table, the natural level of water in the soil under the building site. This is another myth, because homes are not built below water tables. Builders attempting such a feat would find themselves constructing a foundation in a muddy mess. Likewise, basements that flood after a storm are never caused by rising water tables. A water table moves slowly and seasonally. If basement leaks show up after a heavy rainfall or snowmelt, the cause of your problem is far easier to spot and to fix.

Most basement leaks can be traced to trouble with the drainage conditions around the outside of the house. If  too much water is allowed to collect in the soil around the foundation, it will naturally leak into the basement through the walls, or even up through the center of the floor.

The waterproofing solution lies in improving these drainage conditions, which is easy, cheap and highly effective. Here’s where to begin…

Get Good Gutters and Keep Them Clean

Roof drainage is, by far, the number one cause of basement leakage. Since roof surfaces are as large as the house, they collect lots of water in heavy rainstorms. What happens to that collected water can mean the difference between a wet and a dry basement.

Properly designed gutters should have at least one downspout for every 600 to 800 square feet of roof surface. Gutters must be clean, because dirty gutters fill up and the water overflows directly to where you don’t want it: near the foundation. It’s also important to make sure the ends of the downspouts are extended to discharge at least four to six feet from the foundation. Spouts which discharge too close to the foundation are like big fire hoses blasting water into the basement.

If your yard and local building laws permit, one of the best ways to control roof drainage is to discharge downspouts into solid PVC plumbing pipes that run underground and release water to the street or to another low-lying area. When making this improvement, be sure to pitch the pipe slightly toward the discharge point to avoid backups. Also, don’t attempt this with the soft, flexible black pipe that landscapers like to use around flower beds, because it’s easily crushed and cannot be snaked clean like PVC plumbing pipe can.

Next to gutter problems, the angle of the soil around the foundation perimeter can also cause wet basement woes. The soil should slope away from the house to keep rainfall from collecting against foundation walls.

The angle and type of soil are also important. The soil should slope downward six inches over the first four feet from the foundation wall. Thereafter, it can be graded more gradually but should never allow water to run back toward the house.

If grading needs improvement, use clean fill dirt (not topsoil) to build up the soil around your house. Tamp the soil down to the correct slope and finish with a layer of topsoil and grass seed to prevent erosion. Or, just use stone or mulch. Whatever the top layer is, be certain the slope is established with the fill dirt, or else the water will just run through the more porous material and into the basement. Also, don’t use straight topsoil for the grading improvement. This kind of soil is too organic and will hold water against the foundation, which is the opposite of what needs to be done.

It is also important to avoid landscape treatments that hold soil close to the house. A brick, stone or timber landscape edging around flower beds adjacent to foundation walls may look attractive, but these edges can prevent water from draining away from the foundation and increase your risk of basement flooding.

Following these simple guidelines will solve 99 percent of wet basement blues. These waterproofing improvements are inexpensive and can usually be done yourself or with a little help from your friends.

Several years ago, one of my home inspection clients attempted to fix his leaky basement by calling in waterproofing contractors. Besides telling him his foundation would crumble without a waterproofing system, they offered quotes ranging from $7,500 to $20,000. These were outrageous expenses, even if the system did need to be installed,which it didn’t.

Instead, following an inspection, we were able to instruct him on how to correct his outside drainage and easily fix the wet basement problem for under $500–and he avoided getting the soaking of a lifetime from a waterproofing contractor!

Basement Storage and Organization Tips, Garage Roof Ventilation, How to Upholster a Headboard and More

How to Finish a Basement

Drainage to Save Your Basement