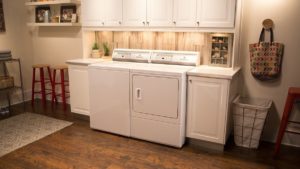 LESLIE: Well, closing the refrigerator door and turning off the lights can save power and cash but your home’s real energy-suckers live in your laundry room. Standard clothes dryers can use more power than a refrigerator. Now there are energy efficient washers and dryers.

TOM: Well, that’s right. And while energy-efficient washers and dryers are on the rise and even ENERGY STAR-certified dryers can cut energy use by about 20 percent, are these more efficient and more expensive appliances really a smart buy? Here to help wash through the details is Richard Trethewey, the plumbing-and-heating contractor on TV’s This Old House.

RICHARD: Hi, guys. It is great to be back with you.

TOM: So these energy-efficient washers, they’ve been around for a while. Dryers are kind of just on the market now, I guess, a couple of years with the ENERGY STAR-rating. They’re a little more expensive. Are these energy efficient washers and dryers really worth it? Are we going to get the return on investment in savings and performance?

RICHARD: Well, Tom, let me give you that standard answer.

RICHARD: But even if this isn’t the perfect time or the exact time to buy, there’s a great chance that these appliances will be worth your while in the next years. They’re getting better every single day.

TOM: OK. Let’s start by talking about how exactly these energy efficient washers and dryers work. How do we get more efficiency out of a washer, for example?

RICHARD: On the washer side, the high-efficiency washers, they spin faster, they use much less water to start with and then they can wring more water out of the load for shorter cycles. And that means less energy use. Front loaders are still the most popular but top loaders are gaining some momentum.

TOM: Now, what about the dryer? I guess if we pulled more moisture out, we’ve already made the dryer most efficient. But what about the way the dryer actually heats the remaining moisture? Has that become more efficient?

RICHARD: Well, I think the high-efficiency dryers, now they have moisture sensors that really work nowadays. They’ve always had moisture sensors but this one, when the clothes get dry, it’ll indeed shut off. And that means you’re not going to over-dry and waste that energy. It shuts the dryer off automatically. They also combine traditional vented heat – the gas or electric – with a heat pump.

Now, a heat pump sort of uses less electricity to extract heat and move it through the dryer. And that really cuts cost and energy output.

TOM: Now that actually uses some of the exhaust heat. It kind of recycles it, right?

RICHARD: That’s right. Yeah, yeah. And that’s the future. We’ve got to find ways to move heat versus try to make heat.

LESLIE: Yeah. But in saving energy, are you sacrificing any quality?

RICHARD: You know, reviews for all the high-efficiency stuff, like any new technology, they’ve been positive. But high-efficiency dryers require a little longer drying time. Some people get upset about that. They’ve been looking at their watch and trying to change the load. And there’s also more air that’s going to be vented out from the house. Remember, you’re taking air from inside the building and pushing it out through that dryer, so some of that air is the same air that you paid to heat and to coo. But that’s a small price to pay, in my opinion.

TOM: So losing a little bit of that conditioned air that you’ve already run through your system.

RICHARD: Well, it’s not a perfect science but one place I would start is that big, yellow label that sits on every single appliance, that EnergyGuide label. It’s helpful, at least, in a relative sense that it’s not going to tell you exactly how much you’ll use for this particular dryer or washer. But it would tell you how much you would use for this washer in relation to a standard one or some other model. So at least it’s relational, which is pretty good.

TOM: So you can use it to compare and contrast?

RICHARD: Yep. So as washers go, the front loaders are going to spin fastest, they’re the most efficient and they’re great on clothes but they shake more. You’ve seen some of these things shake like crazy.

LESLIE: Move right across the room.

RICHARD: So you’ve got to shim them, you’ve got to make sure there’s anti-vibration pads. And the top loaders cost about 200 bucks less but they do save less energy.

LESLIE: And I like this whole concept of labor-savers when it comes to appliances. Can you talk a little bit about that? Because that kind of puts you in charge of how much the expense is going to be for that wash.

RICHARD: Right. Both on washing machines and dishwashers nowadays, you’ve got delayed start settings, you’ve got the quick-wash cycles, all these little things that you can sort of customize. You’re not running a full load with all of this wasted water and stuff like that. And it really can make you control how much energy you’re using.

TOM: And especially if you are living in an area where you have sort of a tiered cost for your electricity, you could run these energy efficient washers and dryers in the middle of the night when the cost of energy is least.

RICHARD: It’s like – to me, it’s like paying for storage on your computer. I think you buy as high efficiency as you can afford and I think it’s worth it in the long run.

TOM: Makes sense. Richard Trethewey, the plumbing-and-heating contractor on TV’s This Old House, thanks so much for stopping by The Money Pit.

RICHARD: Great to be back.

When to Replace Your Washer or Dryer

How Much Insulation is Best, Do Energy Efficient Washers and Dryers Save Money and How to Flood Proof Your Home

Get Fireplace Ready for Winter

Can Big Houses be Energy Efficient?

Learning the Lingo of HVAC