You are here: Home / Empire Level Brightens Future with Illuminated Vials
Tom Kraeutler: Welcome to this edition of the Money Pit’s Top Products Podcast. I’m Tom Kraeutler. As the saying goes, when you tackle a project, you wanted to come out on the level. One company that’s been helping us do that for almost 100 years is Empire Level. I had the opportunity to visit Empire Level in Milwaukee and talk with Rick Gray who’s a senior vice president and general manager of Empire Level. Rick, Empire has a really interesting history. Can you tell us about it? 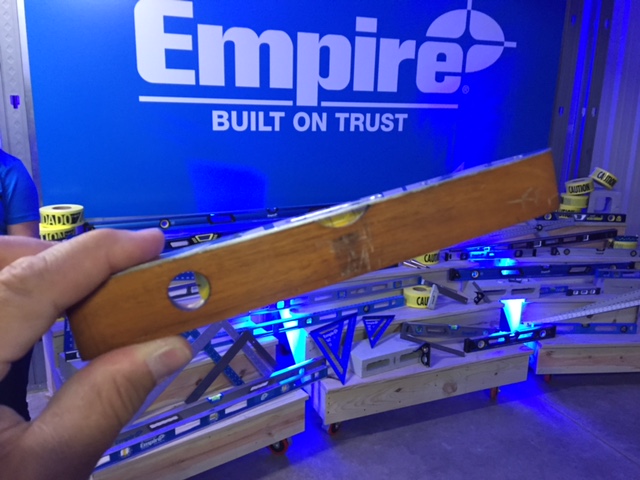 Rick Gray: Empire started by Henry Ziemann in 1919. He was a carpenter and tradesman at that time was looking for a better solution in the level technology. He started by making his first level and by 1935, he introduced the world’s first torpedo level. Empire actually invented the torpedo level. What was happening in the industry before 1919, I mean how do we keep homes level, how do we build them straight and plumb? Well, there were some primitive versions of the level with wood construction and bin glass tubes, but there is a lot of water levels used as well as string bobs and string.
Tom Kraeutler: Now for those that are unfamiliar with the water level, explain what you had to do to level something with the water level?
Rick Gray: Well, it basically looked like a garden hills with a liquid inside of it, and he’d attached one end to one end of your project and the other to the other. You’d watched the water level on each side until it came level to what you would take your material and level it to the top of levels of each side of that tube. 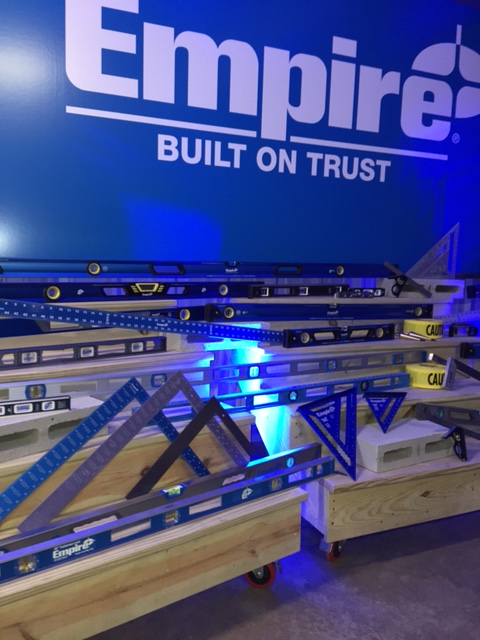 Tom Kraeutler: Thankfully, it’s gotten a lot easier than that. Thanks to some of the work that you guys have done. 1919, we start with the level business. 1935 we introduced the torpedo level. The next innovation was adding magnets to that level. Surprisingly no one had done it before Empire, correct?
Rick Gray: That’s correct. It was a big need at that time because there was a lot of metal construction going on right after the war effort. Lots of building going on and metal construction and metal studs were going up, a lot of steel construction. There was a need for level that could stick to metal and not slide off.
Tom Kraeutler: This was 1965?
Rick Gray: That’s correct. At that time, we also saw a need for a better solution in the vial technology, and that’s when we invented the Mono Vial.
Tom Kraeutler: Now what’s a Mono Vial? Again, what were you using before that?
Rick Gray: Prior to that time, we had 2 bin glass tubes. You saw the happy face and the frown face, one above the other. The bubble would just travel to the top part of that smiley face or that frown and that’s what you would use to level. You’d use one for each side of the level. The Mono Vial allowed you to go to one vial that had a barrel shape on the inside, so that when you flip it, you could use either side of the surface of the level.
Tom Kraeutler: Now today most of the best levels including Empires are made out of aluminum. How accurate are those aluminum beams that you form the level?
Rick Gray: We guarantee that our products are accurate within a half a thou per inch.
Tom Kraeutler: Okay because if they’re not, I’m definitely going to see that.
Rick Gray: That’s right. You will see that. That’s why we go the painstaking efforts to make sure that our products are very high quality and have high accuracy. That’s where we built our name on.
Tom Kraeutler: Today you’re introducing a brand new technology to Empire Level called UltraView that’s going to help us use these levels in dark spaces. Why is that important?
Rick Gray: Well, it doesn’t matter what type of job sites you go to, whether you’re in commercial construction or if you’re in residential construction. There’s always a situation where you have low light. It could be because the lights aren’t installed yet and they’re still putting in electrical or it could be that you’re working underneath of a cabinet or you’re working in a basement or something like that. You need to level something, whether it’s a cabinet or whether it’s pipe or a conduit or fixture. The value of the UltraView LED that we’re coming out with is no matter what your lighting situation, whether it’s some total darkness or in sunlight, this vial will illuminate the entire vial, and you’ll see the meniscus of the bubble in every condition.
Tom Kraeutler: Brilliant. Rick Gray, senior vice president and general manager for Empire Level. Thank you for stopping by at the Money Pit’s Top Products Podcast.
Rick Gray: Thanks for your time Tom.

Cheap Bathroom Remodeling Projects for Under $100

How to Pick the Right Paint Color for Your Home, Kitchen Countertops That Let You Go Green, Fighting Pet Hair Robotically, and more