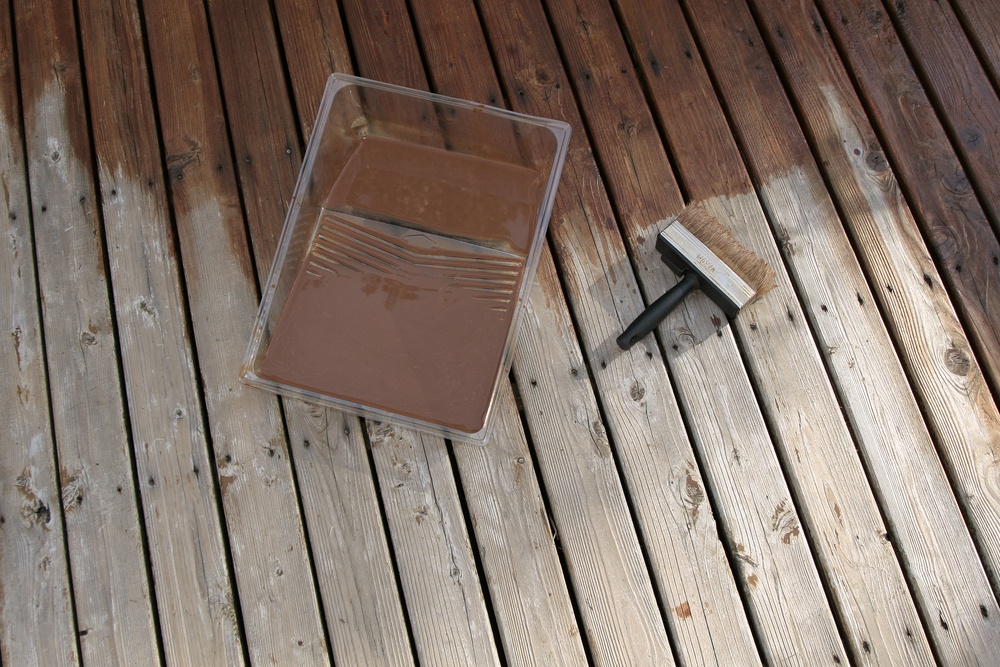 LESLIE: Andrew from Missouri is on the line and has a question about staining deck. What’s going on at your money pit?

ANDREW: Built a deck with pressure-treated lumber a little over – well, it was a little under a year ago. And everybody had said – everybody I talked to had said I needed to let it sit for a little while to kind of cure out. And so, I went the other day and I bought the stain because I was going to, you know, get ready to stain it and I was talked into using – buying this deck cleaner, even though I never put any stain on the deck before.

And so I bought the deck cleaner and all it said – it was Olympic Deck Cleaner. And it just said you put it on, you wait at least 10 minutes. Use it straight on, wait 10 minutes and then hose it off – just rinse it off with water.

ANDREW: So I did that and it first made the deck real splotchy and then it left a real thick, white film on the deck. And so then I called tech support and I talked to a couple guys at a couple different paint stores and they said, “Well, try applying a second application of it and maybe that’ll undercut it.” So I did that and it didn’t do anything.

ANDREW: So now I have a white film.

TOM: Yeah, I’ve actually read several reports about that happening online and they seem to point to a reaction between the pressure-treatment chemicals and whatever is in this deck cleaner, which is probably somewhat bleach-based.

Let me ask you this: what are you planning to do after the cleaner? Are you going to be staining deck?

ANDREW: That was the plan. We were going to do a semi-transparent; like a rustic cedar was a thought. But I don’t know what to do at this point.

TOM: I suspect that when you do apply this stain, it’s going to cover that white haze. I think you’re going to end up OK with staining deck.

TOM: Just an additional point to make on this and that is that you have semi-transparent or solid-color stains that are available. You will find that if you use a solid-color stain, while you’ll still see the grain of the wood, you won’t see different sort of tonal shades. But you’ll find that that has more pigment in it and actually lasts longer. So, keep that in mind when you make that determination.

TOM: Yeah, solid color does. What you might want to do, just to kind of prove a point, is if you can find – if you have any extra lumber from the deck or if you can find a section, like maybe the back of a post or something like that or the underside of a floor joist that you have clean and have that white blotchiness on it, if you can stain that first and see what the coverage looks like, you’ll have a really good idea of what you’re up against before you go for the entire deck surface and railings. OK?

ANDREW: OK. And then my last question is: so when I do stain it, would you recommend putting two coats on or do you just wait to see what it looks like and then …?

TOM: If you’re going to put semi-transparent on and you put two coats on, you’ll probably going to end up with solid color because you’re going to be layering on top of it. But I would follow the manufacturer’s instructions on that, you know. If you want to put a second coat on, I think that’s fine.