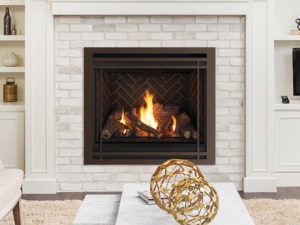 LESLIE: Well, the warm glow of a fire is a welcome addition on a cold winter night. But a wood-burning fireplace isn’t the only way to get the heat and ambiance that a fire can bring.

TOM: That’s right. You can have all the benefits of a fire, without a chimney, when you install a direct-vent gas fireplace. Here to tell us more is This Old House plumbing-and-heating contractor Richard Trethewey.

RICHARD: Hello, guys. How are you?

TOM: So, this is a great solution for people who want a fireplace without the work and expense of building one brick by brick. How does it work?

RICHARD: Well, a gas, direct-vent fireplace is pretty cool because you can put it anywhere. And it draws its air from outdoors to feed the flame. This is set up as really efficient, because you’re not losing valuable heated air up the chimney like you do with conventional gas fireplaces or conventional wood fireplaces.

TOM: I imagine that’s a lot safer, as well.

RICHARD: Yeah, there’s a bunch of advantages. You know, one is safety. Since they eliminate the need for a flue through the roof, you don’t worry about backdrafting where your – the flue part is going the wrong direction. As another safety measure, the vent pipe can be installed directly through the wall. It’s really simple. You get the flue products completely out of the building quickly.

It’s also efficient. Direct-vent appliances burn natural gas or propane, like traditional fireplaces. However, they convert most of their fuel to usable heat. They’re completely sealed off from the interior rooms by a glass door, which prevents that significant heat loss that always happens in a regular wood fireplace. You put that fire on, you get a lot of heat early on and then all of a sudden, there’s a net loss where more heat’s going up the chimney than is coming in see you, so …

LESLIE: Up the chimney, yeah.

TOM: Yeah, in some cases, that’s all the heat that you paid for with your conventional heating system being taken right out of the house. The fact that you can squeeze almost every BTU out of the gas really is what improves efficiency.

TOM: Now, I would imagine these are easier to install, in terms of the flexibility of where you can put them, right?

TOM: Now, when we talk about gas fireplaces, I think some people might confuse what we’re discussing, in terms of direct-vent, with a traditional gas fireplace. But it’s really hugely different.

RICHARD: Yeah. In the old days, what you might do would be put a thing called a “gas log” into the opening that used to be a wood-fireplace opening. And that had all the same issues that you had – many of the same issues that you had with a wood fireplace where you might turn it on, you’d have to open the damper to get exhaust going up. You’d turn on the gas log. And even though you felt some heat, you also could feel almost a draft pulling by you as the heat you just made – actually, the heat you made in that gas log actually increased the amount of air that was leaving through the building, through the uplift that goes into the chimney.

So, those traditional ones have been pretty much replaced by these direct-vent. And those are always sealed units. And so, what’s happened is you get all of your air for combustion from outside. There’s a duct somewhere that comes into that combustion zone, so you’re not creating a negative in the building to pull that stuff up and out. And that’s really the way you want to do it.

LESLIE: Yeah. But so now we’re direct-venting through the wall, through whatever your exterior material is. This sounds like it could be a pretty difficult project for a novice do-it-yourselfer.

RICHARD: Well, this is a gas appliance, so it should be done by a licensed gas professional. But it still doesn’t mean that it’s too prohibitive to do. I mean it’s just – it’s really the way to do it. The key point to understand is that you think you’re getting comfortable heat when you have a regular wood fireplace, when you have a regular gas log. And the net net when you stand back from it is you’re losing as much as you’re making. So you feel this temporary satisfaction but it’s – on the long haul, you’re putting a lot up into the atmosphere.

TOM: Better remember that that’s coming out of your recreational budget when it (inaudible at 0:27:48) that fireplace.

TOM: Richard Trethewey, the plumbing-and-heating contractor on TV’s This Old House, thank you so much. That’s a great piece of knowledge about direct-vent and I think I’m going to consider putting one of those in my house.

Leak in Gas Fireplace – Is It Condensation?

Fire Prevention Tips Everyone Should Know

Get Fireplace Ready for Winter