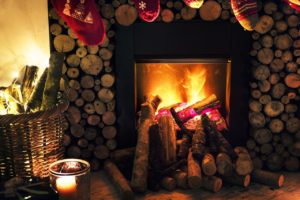 Editors Note: Straight off – we’re not fans of gas fireplaces. They can keep you warm but so inefficient they need a TON of gas to do so. Plus, they’re potentially DEADLY if you don’t know how to use one safely, which includes NEVER closing the damper! Here’s why.

LESLIE: Jo in North Carolina has some concerns about a gas fireplace. What can we do for you?

JO: Yeah, I moved into this house about 12 years ago and the gas logs were already here. And I was under the impression that when I operate the gas logs, that I need to have the chimney flue slightly open.

TOM: No, not slightly open; all the way open.

JO: Always open, would you say?

TOM: All the way open. Absolutely. Because you’re burning – you know, you’re burning natural gas; that’s going to convert to carbon monoxide. You’ve got to make sure that vents (ph) up the house; it’s not slightly open, it’s all the way open. And in fact, in some gas log situations where it’s conversion from a wood burner to a gas-burning log, they put a bracket on a damper to prevent you from ever being able to close it because that could be very dangerous.

JO: Oh. Well, she said something about – this neighbor of mine was saying some are vented and some are not vented and …

TOM: Yeah, an unvented gas fireplace is a manufactured unit – you know, a steel unit – that’s made under very careful controls; and, frankly, even though it is designed to be unvented, we don’t like them.

LESLIE: Mm-hmm. They really should always be vented.

TOM: We would much prefer that they always be vented. But in your case, those gas logs are pretty big burners. Those are usually like 60,000 or 80,000 BTU burners. They use a lot of gas and they need a lot of venting, so make sure you leave the damper open at all times when that’s being used.

TOM: Alright? Not the answer you wanted to hear but that’s the answer that’s going to keep you safe, OK?

JO: Yeah. She said it’d be warmer if I just closed the flue but now that I …

TOM: No, it would be warmer and you would be deader. OK?

JO: Alright. Thanks a lot.

TOM: Good luck with that project. Thanks so much for calling us at 1-888-MONEY-PIT.

How Can I Fix A Chimney Leak in a Gas Fireplace?

Replacing a Gas Fireplace With a Wood Burning Fireplace