Tom Kraeutler: This is the Money Pit’s Top Products podcast coming to you from the 2014 National Hardware Show in Los Vegas, Nevada. I’m Tom Kraeutler. 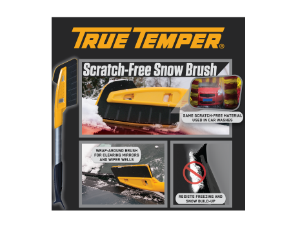 Tom Kraeutler: This is a show we learn about new products. We also learn a lot about companies that have been in the business, in this particular case, longer than we’ve had a country. I’m talking about the newly renamed Ames Companies.

You know them as Ames True Temper, but as of recently, they’re now known as the Ames Company. With me to talk about some of their products and their newest innovations is Eric Bernstein, the Vice President of Marketing and Product Development. Welcome, Eric.

Eric Bernstein: Thanks so much for having me, Tom and Leslie.

Tom Kraeutler: I was privileged to be at your factory for events you guys had just a couple of weeks ago where you announced a big change in direction in what was formerly known as Ames True Temper. Talk to me about it.

Eric Bernstein: Absolutely. We’re very excited on the new rebranding of the corporation. Ames is such an iconic brand. It was established in 1774.

Eric Bernstein: Literally two years before the US was officially the US. What we found is that Ames True Temper was confusing a lot of people. It was a merger over many years ago of the Ames Company and the True Temper Company, so bring it together back under the oldest most iconic brand seemed to make a lot of sense.

Eric Bernstein: Thank you so much. The team worked really hard to really find that beautiful imagery that really makes it seem trusted and iconic.

Eric Bernstein: Thank you so much.

Tom Kraeutler: The Ames Company has a very, very exciting history. It’s the third oldest brand in in the country. Its two offerings literally helped build America for more than 200 years. In fact, I recall that your very first product was a shovel …

Tom Kraeutler: That was made by Colonel …

Tom Kraeutler: That was the very first product and they’ve been making hand and garden tools ever since, and I’ve got to tell you I saw your factory, very, very impressive. No stone is left unturned. No innovation is left untested, and you guys have a really bright future. You’ve got a bright past. You’ve got even a brighter future with the changes that you’ve made.

Eric Bernstein: I really appreciate that. We could not be more proud than to make the majority of our products right here in the USA, and we are completely vertically integrated from the wood mills to buying the logs from the loggers, turning them into wood handles to forging the steel shovel heads, so when you see a flag on one of our products, you know that it is 100% made in the USA.

Leslie Segrete: That’s great and I think what’s important is you’re taking products that have been around for a long time as well and innovating them as we move forward in the future and what you’ve brought with us today is a scratch free snow brush and after the winter that pretty much everybody in this United States of America has had, I think we’ve all gone through one or two snow brushes and this looks completely different than any snow brush I’ve ever seen.

Eric Bernstein: Yes, it was really important for us if we wanted to get into the snow brush category to do something different adn to solve a major user issue. The great thing over this past year is we got a lot of end users that we could talk to and figure out what’s frustrating them on a snow brush and everything, What came up loud and clear was the bristles on a snow brush, the way they can scratch the paint on your car over time.

Leslie Segrete: Yes, they can.

Eric Bernstein: They get frozen. They get clogged with snow and nobody is happy with it, so we wanted to find the material that wouldn’t scratch your car, that wouldn’t freeze, that wouldn’t collect ice. Where we went to is, we went to the car washes to see what they used, and we found this great material, EDA foam, and we were able to put that into a snow brush, replacing the bristles, and bristles, they were designed to take dirt and debris off concrete, not snow off your car.

That’s just what they evolved to, so to be able to take a material that was really designed to be used on your car’s finish, the second most biggest investment that we make in our lifetime is our automobile, and to be able to have something that can really get the snow off beautifully well and not scratch it and not streak was a big accomplishment, which we’re proud of.

Leslie Segrete: When we’re looking in the car wash, we’re talk about those big turning flapping bristly things that are just pieces of foam smacking your car. That’s what this is made out of.

Eric Bernstein: That’s what this is. We have four layers of this foam material that does an amazing job of getting the snow off, but also doesn’t scratch your car at all and is extremely durable. One of the things that we were able to do is have a very interesting geometry to that head so you can wrap it around, so when you’re in your window wells or around your mirrors …

Tom Kraeutler: All the tough places.

Eric Bernstein: All the tough places.

Eric Bernstein: You can get to it now without crashing the plastic or the brisltes against your car.

Eric Bernstein: Yeah. We have three models that we’ll go to market with, everything from a 28-inch all the way up to a 36-inch. The retails are very reasonable, anywhere from $14.99 to $19.99 in the marketplace.

Tom Kraeutler: You guys are going to sell a ton of these. Once people figure out what this is, because it looks so spectacular, you don’t even recognize it if you didn’t see the blade at the end of it, it is a snow brush, but once you start using this and you think about all the nooks and the crannies there are in your car and how much snow you can move off with this product, it’s going to do incredibly well. I love the fact that you are not set to leave well enough alone, that you set out to totally re-invent the snow brush and that’s exactly what you do, and that’s exactly what you did, and that’s why you’ve been around for 200 years is because of that kind of spirit of inventiveness that leads your team to come up with things like this.

Eric Bernstein: Thank you so much. We’re very fortunate. We have an amazing team that tirelessly looks at how to make products better and how to make lives easier for our end users and this is one example of …

Eric Bernstein: What we think will be a home run.

Tom Kraeutler: Well, congratulations on the renaming of the company, now known as the Ames Company, and this particular snow brush is going to be part of the True Temper Brand.

Tom Kraeutler: When is that going to be coming on the market?

Eric Bernstein: This will be in the stores in September of this year.

Eric Bernstein: Just in time for the stock up.

Tom Kraeutler: Let’s hope the snow holds off a little bit longer than that. Eric Bernstein from the Ames Companies. Thank you so much for being a part of the Money Pit Top Products podcast.

Eric Bernstein: Thank you so much, Tom and Leslie.

Tom Kraeutler: If you’d like more information about Ames, you can go to their web site, which is ames.com, that’s A-M-E-S.com. To learn about the True Temper line of products, go to True-Temper.com.